Newbie to UC – Doc Says I Have To Take Lialda 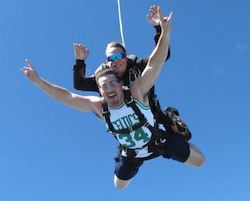 Mike getting his skydive on!!!

I’m a happily married 33 year old male currently residing in Dallas, TX. Diagnosed with UC on March 25, 2014 and currently testing the limits of my eating abilities while adjusting to a new lifestyle. Ddiagnosed with left sided Ulcerative Colitis and using medication to treat while adjusting diet, increasing physical activity, and removing alcohol.

I am totally addicted to Disc Golf. I play at least 36 holes per week with my super awesome friends. Until recently I was also the drummer/singer of a cover band here in Dallas/Ft. Worth but I was also diagnosed in January of 2014 with arthritis in my ankles, so I had to quit drumming (yes more inflammation it’s not a coincidence). One interesting fact is that in December of 2000 I came down with a disorder called Guillian-Barre. It is also an auto-immune disorder that attacked the nerve endings in my hands, feet, and face. I lost about 20% of the feeling in my feet but was able to fight off and recover from the other horrifically painful symptoms (really gives my UC a run for its money in terms of pain). My sister has Alopecia, which leads me to believe that my auto-immune response problems (guillian barre, arthritis, UC) are all related to problems passed down genetically or at the very least her and I are major worry warts hence high stress.

Currently I’m experiencing a small amount of blood mixed into my stool, occasional discomfort on the left side of my abdomen, occasional post-meal cramping, increased frequency of bowel movements, and occasional fatigue for no reason. Honestly I’m so new to this I’m still learning the difference between remission and a flare up, and I’m still testing out foods to see what does/doesn’t work.

Newbie to UC – Doc Says I Have To Take Lialda

All my health issues are due to incorrect auto-immune responses. when I was 20 years old I got Guillian Barre disorder, a real doozy of a health issue. Look it up you’ll see what I mean. In 2012 I started having joint pain in my ankles and I would have terrible inflammation and pain in my ankles. I started using Prednisone intermittently to fight off the ankle/joint issues for over a year, and then went to a podiatrist who told me I had arthritis in both my ankles as a result of flat feet. May of 2013 I started noticing fresh red blood in my bowel movements so I assumed it was hemorrhoids and started treating it accordingly. It subsided until December when it came back with a vengeance. I went to a GP who told me I had 3 hemorrhoids and would need to up my fiber, reduce my toilet time, drinks tons of water and get more exercise. So, I doubled up on fiber, stopped taking my phone in the bathroom, polished off 2-4 liters of water pe r day, and started taking walks, and playing disc golf as often as possible. My symptoms got worse and I started to see blood in my poo as opposed to separate and had a sudden pain in the left side of my abdomen after eating nothing but fruits and vegetables for 5 days straight. I went to see a GI specialist named John Hyatt and he performed a colonscopy which revealed I had Left-Sided Ulcerative Colitis. Since then I have been using trial and error to find whats edible. I took 30 mg of prednisone for 3 weeks, and Metronizadole for 3 weeks along with 4 Lialda a day for life, and it seems to be working. all symptoms are reduced.

“My doctor says I have to take Lialda or I’ll always battle symptoms. I really don’t wanna be on such a powerful med for life, is there truly a way to live in remission w/o the help of meds?”

Yes, there are actually quite a few ways to live in remission without meds.

But first things first, you need to be realistic (and your doctors do as well) and understand that just because your doctor is recommending medication, that most certainly does not mean you “for sure” won’t experience flare ups along the way.  If that was something your doctor (or any medication could guarantee), I can assure you that MANY more people would be going the medication route.

But most of us know, that’s just not the case.  But again, it would be awesome, especially if medications were free and guaranteed to have no side effects right?:)

I live in remission with the help of diet.  And I’ve made this conscious decision because I nearly exhausted all other medications from 5-ASA’s to Immune suppressing biologics like Remicade AND Humira.

Before I forget, have you read the Lialda Reviews page yet? (UC’ers from the site reviewing their experiences with the med…)

Now, what are the trade-offs for my preferred treatment method compared to what my GI specialists from Stanford, Palo Alto Medical Foundation, UCSF, and the Mayo Clinic in Scottsdale Arizona all recommended?

So, all things aside.  I lost faith in the ulcerative colitis medications because they failed me miserably.  They did not let me reach the goals of living how I wanted to.  And, I have learned that I don’t need to “take medications for life” like was nailed in my head by multiple GI docs after my diagnosis in 2008.  This said, we all need to make our own decisions.  My rambles are getting off your point by now.  If you’re not seeing eye to eye with your current GI doctor, do what I mention in the ebooks I’ve written and find a GI doctor you like.  No reason for anyone of us with UC to be unhappy for years with the GI doctor who should be helping you get past the disease.

Thanks again for sharing Mike, and best of luck to you and your family,

happily married 33 year old male currently residing in Dallas, TX. He was diagnosed with UC on March 25, 2014 and currently he’s testing the limits of his eating abilities while adjusting to his new lifestyle. He was diagnosed with left sided Ulcerative Colitis and has been using medication to treat while adjusting diet, increasing physical activity, and removing alcohol from his life.

previousDoes Anyone have experience with Fecal Transplants?
nextMedication Reviews – Find Out What Other UC’ers Experienced