Colonoscopy Results Video – How Is The Colon Really Doing? 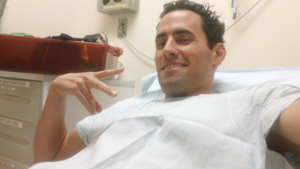 This was me about ten minutes before the colonoscopy started, Sept. 28, 2012. The colonoscopy center actually borders the site of the Oakland Occupy Wallstreet demonstrations that were going on last year crazy enough…

WOW, IT’S ALMOST BEEN a week since I got my colon probed (the full colonoscopy not a sigmoidoscopy) and I just received the “go ahead” email from my doctor to post the video I recorded (he’s talking in most of it, and I’m sure some doctors wouldn’t like being on YouTube, but not my gastro), thanks Dr. Stollman on that, and thanks for doing such a great job and being a gentle-man.  And I’m not just saying that because you’re a cool dude, but everyone at the colonoscopy center was incredible.  Who knows if I’ll be singing this song when the $1600 expected out of pocket bills come tumbling in over the next few weeks.  That’s right, scopes don’t come cheap, whether it’s out of pocket or not, the costs for the procedure…wow they are up there.

MAYBE FOR YOU, and definitely for me, colonoscopies are a super important part of having UC.  Yes the colonoscopy preparation isn’t always fun, and yes, getting a camera gliding and sliding up your colon isn’t exactly like going to Disneyland.  But it’s a part of the program for most of us, and it’s nothing to lose too much sleep over.

As you might remember, back on June 22nd I wrote a post explaining that I was interested in getting a colonoscopy because  “I wanted someone to take a peek inside the deep dark doodie hole and see what’s really happening.”  So now three months later, my day came.  Below is the video.  I don’t have any of the pictures that were taken but I think this should give you a full idea of how my insides are doing.

Back on October 2nd, 2008, my entire colon was severe with out of control UC and my symptoms were out of control.  I’m super happy and very thankful that things are very different now, but I’ve still got a little work to do, and some decisions to potentially make.  One thing that you may relate to from the video is that even though you feel fine/normal on the outside and in your daily life, there’s still a chance that you can have mild UC on the inside.  Pretty interesting right?  And in my case, that’s what made this colonoscopy super valuable.  I wanted a sanity check back in June, and I got one.  I’m feeling great, but the insides aren’t perfect, and that’s what I’m shooting for before 4 years is up and I’m at it again with the scope.

I wish you all the very best with your UC, and there’s a ton of more stories I’ll be posting that have already been submitted and are sitting in my inbox.  And we’ve got a pretty cool survey coming up in a few weeks, so get on the newsletter if you want to participate.

Thanks again for watching and I hope you enjoyed the video,

PS:  Way cool meeting I had today with another UC’er here in Berkeley named Vanessa.  Really really nice meeting her and hanging out and hearing her story.  I’m sure she’s going to get through some of the tuff times she’s facing right now.  For me the first year was BY FAR the hardest, and that’s not uncommon.

PSS:  If you’re in the Bay Area of California, or you don’t mind traveling to a super cool GI doctor,  I’ve got to say that Dr. Neil Stollman is a pretty incredible GI.  I’d say he’s got to be among the best of the best, and hopefully you got a nice warm feel for him here.  (Maybe he can be convinced to get in on some more videos in the near future…:)  ALSO, for those of you interested in Fecal Transplant stuff…good old/young Doctor Stollman was one of the doctors who was a part of the recent study that has been all over CNN and the rest of the news regarding C-diff and Fecal Transplants.  That was actually a key factor in why I decided to pair up with him when I went searching for a new GI closer to me here in Berkeley.  That study which was released back in March is titled: “Long-Term Follow-Up of Colonoscopic Fecal Microbiota Transplant for Recurrent Clostrodium difficile Infection”.

PSSS:  The does anybody have any idea of what song I’m trying to play on my 2 week old guitar that I’m trying to learn how to play??? There must be some kick butt UC guitarists out there, anyone giving lessons…:)

41 thoughts on “Colonoscopy Results Video – How Is The Colon Really Doing?”