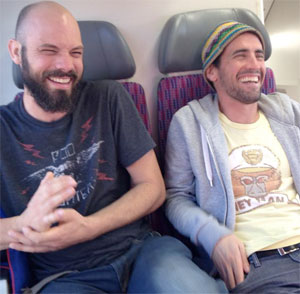 laughing on the train ride with Jonathan yestereday…(there’s life after coffee:)

Hey What up UC’ers,

It has now been over 2 full months since I’ve completely cut out coffee from my diet, and I thought it could be worth while to share how things are going.  First let me explain the reason why I attempted (and succeeded in stopping the coffee altogether, and YES, I’ve had many an urges in the early days with dipping back into a cup or two…)

Back in the end of August (or maybe it was early September) I found myself on a Saturday morning getting up later than usual since it was the weekend and sitting in the kitchen with a full pot of coffee all to myself.  Unlike other mornings, I drank two full cups of coffee before having anything else to eat or drink.

And crazy enough, I did the same type of routine the very next day on Sunday.

Maybe this type of morning routine is something similar to what you are in the middle of on the weekends?

I don’t think it was a good idea at all in hindsight, and I even noticed some signs and symptoms of old man colitis waking up from a long nap.  Symptoms like less formed stools for example(come on folks, you know what I mean, I’m not talking about some rock hard nice poops coming out which we all want to see.)

yesterday we hit up a restaurant, and to our surprise they were having a “Geese Feast”…a three day deal out in this village I guess…anyways, I’m sippin on perlivou voda (or sparkling water which crazy enough is more expensive than a half liter of beer and just about any other drink on the menu…)

So, this was the beginning of my coffee break.  Soon after I dropped coffee altogether and have not had a single cup of anything even remotely related to coffee since.  I’m still pounding the ginger/honey/lemon teas nearly every morning, and in the afternoon or any other time, I crank that as well when I may have previously turned to coffee.

I think it was a great idea and my colon has responded nicely as well.  Maybe the same can work for you too…

Here’s why I think cutting out coffee might help you as well:

So what do you think?

Would you consider completely stopping having coffee if it might help out your ulcerative colitis symptoms get back on track?

I’m interested to know what you all think.  It has been two months and although I see my wife sipping coffee several times a day right next to me, I’m not really dying to have one myself…yet.  We’ll see how it goes when it starts getting freezing here right…

**if you are interested in reading up on a new PubMed study that’s related to Ulcerative Colitis and diet, here is a new one I just finished:

61 thoughts on “Coffee and Ulcerative Colitis – Good or Bad?”