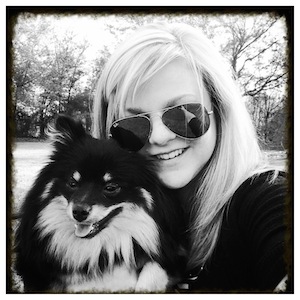 Some more about Kelsey:

I enjoy my family time, my family is my world and I take special pride in taking care of all of them. Along with most other Georgians I enjoy hunting, fishing, and being outside when it’s not 100 degrees out.

My current symptoms include bloody mucus, pain in my left side, gas and bloating, constipation, bloody diarrhea, fatigue, headaches, and a general irritability just because I don’t feel good.

[dropcap]I have been suffering[/dropcap] with symptoms of UC since 2000. At first we thought it was certain foods or spices that were triggering my diarrhea attacks, but we could never narrow it down to which ones. My primary physician at that time treated me for everything from lactose intolerance to parasites, but in the end he decided I just had IBS and recommend that I carry an “Emergency” bag with me at all times and avoid stressful situations… obviously he had little experience with teenage girls, stressful situations were everyday! Like many of my other peers I was taking a prescription for my acne and I truly believe that this is what activated my UC, and it wasn’t too long after that I began taking this medicine that I began having symptoms.

As time went by I was still having my diarrheal attacks at random times, and it just became something that my family and I dealt with. Eating out and traveling we difficult at times, but my family was always understanding, and they knew when I said “I’ve got to go” that I really had to go and made it a top priority. Even my little brother would chip in and tell people that I had the “bubble guts” and would in the bathroom for a while… obviously he didn’t see any reason to be discreet!

My symptoms did not get worse until I entered college. There were times when I missed whole classes because I was stuck in the bathroom the whole time. I began to pass blood and we decided it was time to really get to the bottom of what was going on. Our physician at that time could not find anything wrong, but referred me to a general surgeon for a colonoscopy since Colon Cancer did run in my family. At the consult with the general surgeon I spilled the beans and told him my story. He said I didn’t need a colonoscopy and I needed to eat a high fiber diet, take fiber supplements, and drink lots of water. Needless to say this did not work and a year later I was back and in worse shape. This time he performed the colonoscopy and did biopsies which confirmed Ulcerative Colitis; he then referred me to my current GI doctor. My GI immediately put me on Asacol; which calmed everything for a while. I had a nasty flare up some time later; which we treated with Prednisone for sev eral weeks and then I went into a fantastic remission.

I went through a very stressful time in spring/summer of 2013; which caused me to go into a horrible flare up in July 2013. I have been in flare ever since. I had another colonoscopy in October 2013; in which we found out I had Ulcerative Proctitis as well. I was on and off Prednisone for 9 months, every time I would try to wean off the steroids my symptoms would start back up. My GI started me on 6mp; which put me in the hospital with Pancreatitis, so that line of medication was out of the equation. He then decided we needed to go the biologic route and prescribed Remicade. I had 5 infusions before my body began rejecting the Remicade; which lead us to begin Humira. I am currently on my 8th week of Humira, and to be honest I’ve seen only a slight improvement, I was really hoping to be feeling a lot better by this point.

I have recently found this website, and have been reading everyone’s stories and have realized my UC is nothing compared to most on here. I have decided to start the SCD diet, it is going to be extremely difficult for me, but I have to do it for myself so I can heal and to prevent further damage to my colon and rectum. I have been reading about LDN, I was wondering for those of you taking it were you taking other meds when you started it, and do you still have to take other meds along with it? I would love to be able to come off the Humira, I have little to no immune system and I don’t like the idea of injecting toxins into my body every other week.

I am at a point where I am sick of being sick, and I know my situation could be so much worse and I so thankful that it’s not, but I just want to feel good. I also suffer from sinusitis and migraines, so days where I have no tummy trouble and no headaches are few and far between. Any advice and recommendations are greatly appreciated and thank you in advance!!

written by Kelsey B