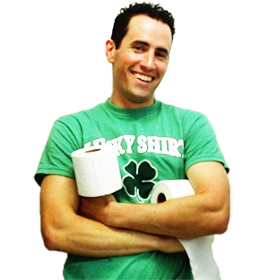 FOR ANYBODY WHO ALREADY KNOWS about “Helminthic Therapy”, I’m guessing your first thoughts were somewhere along the lines of, “Oh HELL NO!”.  Could anybody blame you?  Of course not.

For crying out loud helminths are little parasitic worms.  And who wants to be messing with those right?  Disgusting, nasty, full on ridiculous…well maybe.  But the reality is that there is some pretty top notch research going on right now on this exact topic and this type of therapy has actually been around for quite some time.  If you do some of your own research, you’ll see that there have been studies on this topic/treatment for over ten years now.  So if you are new to this term and idea, why were you left in the dark up until now?  Well, research on these little buggers take time, money and some DAMN SMART SCIENTISTS.

Over the weekend, I started receiving some emails from followers of this site about some recent news articles that had surfaced surrounding some recent research.  And sure enough, that same day on my google news homepage there was a link to one of these exact articles.  It turns out that a rockstar in the microbiology and immunology research area is moving forward with a pretty incredible study that hit the wire recently. One of the lead researchers is named P’ng Loke, Ph.D., and he was involved in a study titled: “Therapeutic Helminth Infection of Macaques with Idiopathic Chronic Diarrhea Alters the Inflammatory Signature and Mucosal Microbiota of the Colon”.

The website which has this study as well as many others on various topics is: www.plospathogens.org

So, without trying to act like I know too much about this alternative treatment idea, I’ll try to boil down some of the facts/theories behind why people are spending so much time, effort, and money researching helminthic therapy:

That is a very simplified view on this complex topic, but I would encourage all of you who are interested in it to research more.  Here are a few website links that you can look at and review:

I’d also encourage everyone with UC who is interested in this topic to bring it up with your Gastro doctors the next time you meet with them.  Although they might not be as excited about the topic as you/I might be, I’m hoping that they at least read the current publications on colitis related science.  If they don’t…well, that’s always interesting to know as well, right?

Best of luck to all of you this week coming up.  For those of you who are going to be carving up the turkey, make sure you keep all your fingers.  If you haven’t already, feel free to press your luck with the Colitis Quiz.  The last I looked, there were only 3 people who scored 100% correct on the six questions, and since there were well over 100 of you who took it so far, I think that means I got a little to crazy with some more difficult than expected questions.  My bad you guys.  Next one won’t be so crazy, I promise.