Bone and Joint Pain – Suddenly Hurts So Much – What do you Do? 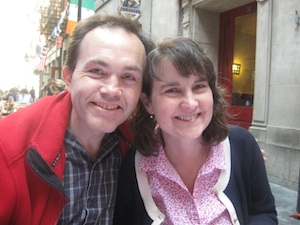 This is Hope and I’ve written before. I have 4 children (16, 18, 20 and 22 years old) and have been married for 25 years now in December. I’ve worked as a registered nurse for the past 25 years, and now have a job as an RN in Quality Assurance and Education of new staff to my agency.

Most people would see me as friendly, positive and hard working. No one would have guessed the amount of pain I was in from UC over the years, and how it controlled my life and I worked my life around UC til I no longer could. It became disabling, and my ability to exercise, go out with groups, eat out, sit through a whole movie or plan family outings became impossible. When UC started to threaten my job because the pain was so bad I could no longer get through the day and was considering disability, I felt like UC had completely taken over my life.

I have had amazing results treating UC since starting Renew Life Probiotics (ranging between 30 billion and 50 billion count) and I want to thank everyone for their advice and support along the way. I can’t say enough about repopulating your gut with healthy microbes! It has been the key for me at this point. I have not had any bleeding for three solid months – those results occurred within days of starting Renew Life (linked through this web site to Amazon). The pain I was living with was constant. I occasionally have pain now but it’s rare and usually associated with trying to eat a food that bothers me. I was taking 20 pills a day ranging from lialda, prednisone, nexium, dicyclomine, lomotil and tylenol for pain (which didn’t work, but motrin caused GI bleeds). Also suppositories and enemas daily. I’m now taking only 1 lialda in the morning, one in the evening and a nexium. So this has been a huge difference for me.

Bone and Joint Pain – Suddenly Hurts So Much – What do you Do?

UC has definitely changed my life. I have had it since I was a kid with terrible gut pain since I can remember, never knowing it was Ulcerative Colitis and not being diagnosed til my brother died of colon cancer in 1997 and I had a colonoscopy following that. I have always had what was called “mild” or “moderate” UC by colonoscopy – I’m like “If this is moderate, I don’t want to know what severe means”, and feel so badly for people with symptoms worse than mine. I’ve had more blood work than I can remember, CAT Scans, MRI’s Upper GI series and EGD’s.

Over the last three years the symptoms became almost unmanageable. I have a fantastic, thorough, caring GI doctor who works well with me. She has been sensitive to my ideas and questions, offered research to me, ideas and has spent many a visit sitting down face to face with me and just “figuring things out” together. She’s been judicious in th e use of medicine and has been careful to see what my other doctors recommend too. My family has been very caring and understand that I can’t do what I want to, especially in a flare (which is a misnomer – flares are more like an out of control forest fire that I never know when they will go out once they start!) They expect me to cancel things last minute now, which has it’s positives and negatives – at least they know I’m sick and understand when I cancel, but I wish I didn’t have to cancel so many things. It’s isolating. With the decreased pain, I’ve been able to add more things though, which is good. The thing that has started to develop now that the gut pain is under better control is bone and joint pain. That has been surprising and discouraging. I had thought I would be able to exercise a little more – I was lucky to go out on walks this summer – but now my left shoulder and elbow hurt so much I can’t lift a tea cup, my finger and to e joints hurt constantly and my right knee is so bad I can’t kneel down to pick something up. My spine as well.

What do you do for joint pain?

I want to exercise. I had been using an elliptical 3 times a week for 30 minutes at a time, taking walks with the kids and my husband. Now walking around the block hurts and this is new in the last three to four months. I have osteoporosis – one doctor thought I must have been anorexic at one point in the past my bones were so bad on my DEXA scan when I was 40 they said I had bones like a 90 year old! I told him I had never been anorexic. Now through the GI doc I found UC can do that since you’re not absorbing the nutrients you take in. Over the years that adds up to pourous bones. Osteoporosis is not supposed to be painful though. Does anyone have deep bone and joint pain, even when the GI symptoms settle down a bit? And what do you do to help that so you can exercise again? Or bend, or walk, etc…Thanks for all your help everyone! And let’s keep supporting and helping each other! Thank you, Adam, for this site – such a help to so many people.

I have been an RN for 25 years and the mother of four children, married for 24 years. My brother who had crohn’s disease starting as a teenager, died at age 43 with colon cancer in 1997.

38 thoughts on “Bone and Joint Pain – Suddenly Hurts So Much – What do you Do?”