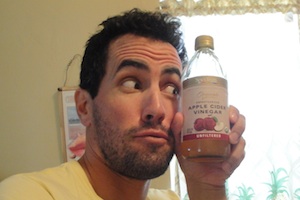 Me just before taking my morning swig today

I’ve got a little bit of news, maybe even a tip you might use as well.

I’ve made a very mild addition to my colitis treatment about 3 weeks ago.  Nothing major, and it’s looking to cost me about $4 more per month, so it’s not breaking the bank for sure.

I’ve started taking a tiny tiny swig of apple cider vinegar in the morning and evening(about a teaspoon I’d say).  OK, yes yes, I’ve forgotten a few times here and there, but for the most part, I’m probably remembering about 85% of the time to take back a tiny bit of this SCD legal vinegar twice daily.

Well, let’s see, about a year and a half ago I met a girl in San Francisco who’s father and cousin have UC.  She told me that her father was lined up to have his colon removed at UCSF (which for those of you who haven’t heard of “UCSF”…its thought by many to be one of the premier medical facilities in California…they also recommended for me to have my colon removed 4 plus years ago…so I don’t think as highly of their gastro program as some others…but anyways, that’s not important)  Good news is, this girl’s father did not end up getting surgery, but instead took to a more natural way of healing and treating his out of control colitis symptoms.

He started taking a few tablespoons of apple cider vinegar in the morning along with a squeeze of lemon juice, and a half teaspoon of baking soda.  She told me he’d mix it all up, and drink it luke warm in the morning before breakfast.

I found this super interesting, and the reasoning behind it all was fascinating as well.  The girl had a few years before studied naturopathic healing at an institute in San Francisco (I’ve forgotten the name by now).  And, the mentor at this place had the belief that much of the gastro related problems people face is based on acidity (much too high acidic levels in our bodies).

This was crazy to me… I instantly asked her something like, “Well…isn’t Lemon Juice and Vinegar SUPER ACIDIC?”

Her response was surprising,  “No, actually that’s not the case”.

Wow, so I of course asked her some more, and she went on to tell me some of the most acidic foods/drinks.

And there’s all sorts of other things which I didn’t really know were/are acidic actually are.(I’d encourage you to do some Internet searches on “acidic foods” just to check out a list of these, its might blow your mind)

I mainly use diet which I’ve talked about for years here on the site, but I’d never really considered acidity in foods to be something to think about.  And, as I’m writing this over a year since meeting this girl, I’ve obviously not put it as a super big priority to investigate further, but now is the time.

And, I’m super interested in what YOU think on this topic…

Do you think acidic foods play a part in your ulcerative colitis????

Back to the Vinegar

I don’t have a good way of finding out if the Apple Cider is a positive for my body or not.  It is hard to make an accurate judgement when your colitis is in remission and you start something new.  But I can say that it does not seem to be hurting me at all, and that’s a positive.

What will really be interesting is to see if this does anything to help me out if a flare up comes along unexpectedly in the future.  (And since October/November are typically my tuffest months in some years past, who knows…maybe I’ll have a better chance to put the vinegar to the test).

There is alot of information online, you can simply type in Apple Cider Vinegar on google or somewhere else, and you’ll see all sorts of articles pop back at you.  And, there’s lots of different options if you want to give this a try.  I’ll list some Amazon affiliate links below if any of you are interested.  But at the end of the day, my hope is to hear from some of you who are already using Apple Cider Vinegar with success.  It seems to be a very big part of a UC’ers medication free treatment in San Francisco, and I’m sure there are more out there.

Best of luck to all of you with your UC in the coming weeks.  Thanks to the girl in San Fran who told me about this. (I’m sorry I’ve forgotten your name, but you were super kind to let me in on this a while back, and hopefully others will find it beneficial like your father has)

founder of iHaveUC.com and treating my colitis without medications for quite a few years now (but I guess some would call Apple Cider Vinegar a medication…)

previousBone and Joint Pain – Suddenly Hurts So Much – What do you Do?
nextHope for Other UC’ers