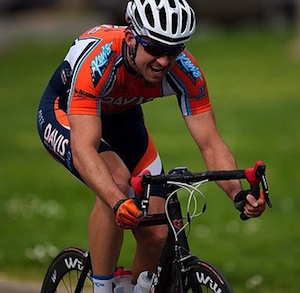 I’m a 33 year old dude in Woodland, CA just livin’ the dream (or a nightmare lately…).

I’ve battled a host of auto-immune diseases over the years, all of which have gone unsolved and untreated for the most part: Asthma, Chronic Pneumonia, Infertility, Terrible Acne, etc., etc.

Depending on where you draw the line in regards to UC symptoms, I’d say that I really knew I was sick just at the beginning of November, 2013 (so yes, I’m a newbie). I had a colonoscopy in early December and hospitalized later that day with 104deg temps. While in the ER I was told I had UC AND Pneumonia, awesome!

The more I ask myself WHEN did the UC symptoms start, the more I can’t think back to when I was “normal” or what “normal” even was…
twitter: @malmer7

Some more about Ryan:

Other than a few years away at college, I’ve spent the majority of my life in Woodland, CA: a “small” farm town in Northern California with really fantastic weather.
Living in NorCal allows me to be very active: Golf, Running, Tennis, Hiking/Camping, etc. Over the past 5 years I have developed a passion for cycling and worked my way through the ranks on the local racing circuit. Toward the end of last year I was able to reach the “pro” level and race against a whole bunch of amazing endurance athletes.
About 18 months ago my wife and I adopted a new-born baby girl, Cora, and it’s changed our lives in so many amazing ways! With my recent flare up it’s certainly zapped my energy and our playtime seem to be getting cut shorter and shorter because of it.

I am currently battling bloody D symptoms on a daily basis, going 3-6 times per day. I am also struggling with bad stomach cramps almost constantly. Urgency has been he biggest life-changing factor as of late, keeping me from doing so many of the activities that I love.

I’ll start by stating the fact that I feel pretty lucky right now… I’ve been reading through this site (while I should be working) over the last few days and it’s given me a lot of perspective. My last few months have been painful but reading everyone’s posts on this website has opened my eyes and I am now counting my blessings in thinking that I found this website EARLY and that I can hopefully be one of those contributors that is in full remission without surgery…

I’ve never been an overly healthy dude: asthma, chronic pneumonia some years, infertility, sinus infections, etc. But I never let that stuff hold me back while I continued to raise my game in the world of endurance athletics throughout the years. I was a long distance runner in high school, captain of the cross country team, and recruited to run in college. I have always been super-competitive and about 5 years ago I fell in love with the sport of cycling. In 2013 I got a coach and realized most of my potential when I reached the local “pro” level of the racing circuit. In my opinion, competitive cycling is the hardest sport in the world – I put my body (and mind) through brutal test after brutal test to achieve what I did.

In late July my season came to an abrupt end with a case of pneumonia. I had been racing for 5 years, and this was the 4th time that I had a season cut short due to pneumonia. Now that I think of it, I’ve NEVER had a cat-scan where they didn’t see some fluid in my lungs…

It was hard, but I decided at that point I needed to take a long break and really get healthy before getting back at it. I already ate very healthy (you must in order to compete at this level): I was gluten free and dairy free and my wonderful wife cooked a lot of good meals with a good portion of whole foods.

Well, I eventually “recovered” and began my training for the 2014 season, starting on November 1, 2013. One weak later I started having multiple BMs per day. I can’t recall if they were “normal” or not anymore, which is frustrating because I’d love to have that information – but when you haven’t been sick in the past, you kind of just go with it. I chalked it up to over-training and told myself I would get better as my body adjusted to the new training schedule. A few weeks later the BMs got really bad and I saw a GP (actually a physicians assistant now that I think of it). She put me on flagyl and said it would clear me right up… As you can guess, it didn’t and she referred me to a GI the next week. He wanted me to do a colonoscopy and I needed to get back on the bike ASAP so I pushed the GI to get me in within the next 3 days.

Now for the fun part: I had the colonoscopy, and don’t remember much after that while I was still trying to come to… I went home and slept for 3 hours and woke with a 104deg temp. We called the GI and he told me to go to the ER right away – he was afraid they might have punctured my stomach lining during the colonoscopy, or he figured I had C-diff… Thankfully neither was true, but when they did the cat-scan of my stomach, they saw fluid in my lungs… pneumonia again (and what comes with pneumonia: antibiotics, we’ll get to that in a sec)…

When you can’t breathe, and you can’t poop right, you literally feel like you’re dying… I mean come on, those are essential functions of the human body last time I checked.

My GI Doc put me on Apriso (oral mesalamine) and mesalamine enemas. I fought him on the enemas, thought there was no was I could go there and no way I could find the time for it. Thankfully he convinced me otherwise and I improved significantly in about 3 days! I stayed on both for a month and when I saw the GI he told me I was “good to go”! I asked about diet since I had already been GF and DF. He told me I should go back to consuming those things, that my previous reactions were likely due to the UC and I should be fine going forward.

MAYBE 5 days later the flare came back, and it came back much worse than it had been before the meds! When I say worse, I mean the blood and the extraordinary volume of it. I’m such a wuss when it comes to blood – I’m the guy they have to lay down in a dark room just to take a blood draw.

Called up my GI and he wanted to put me on steroid enemas. All along he has been telling me the mesalamine is pretty harmless when it comes to side effects, but steroids could not be side-effect-free in my opinion.

That night I sat down with my lovely wife and we decided that diet HAD to have more to do with this than the doc was letting on. We decided we’d fight the symptoms with the GAPS diet (very similar to SCD as most of you know). My wife is a scientist and that book/diet was right up her alley so that’s the road we chose. Because of my multiple bouts of pneumonia, I’ve been on antibiotics A LOT. Reading the GAPS book made us realize that my gut flora must be a mess! Three days later, February 1, 2014 we gave it a go…

The first few days were awful – lots of blood, no solid stools, and I was starving! We began on the “Intro diet” which was basically broths, soups, and probiotic dairy… I lost 8lbs in 10 days and I didn’t have much to lose… At day 7 of the diet I decided I needed to go back on the mesalamine enemas and use some combination to at least get this flare under control (this is in thanks to this website and reading other accounts of people having success with some sort of combination of drugs and diet). I doubt mesalamine is GAPS approved, but I decided I had to get it under control, and then rely on the diet to keep it from coming back.

I’m on day 11 of the diet and I’m not as hungry so that’s good. Stools are slightly improving but not much. I was really stressed about this until I started reading this site and realized how long the diet can take to be effective.

I don’t have any earth-shattering’ly brilliant questions for the UC community. I just thought I’d share my story, let everyone know how appreciative I am for allowing me to read their stories, and how much it’s helped me along the way these last few days. I’m STOKED to see that my thoughts on supplements are followed by many here! I don’t know where things will go from here, but none of us do really… Maybe I’ll follow some of you into remission, maybe I won’t – but I’ll keep reading here and keep sharing my story so that others know that there are other people out there going through the exact same things…

Rx Medications:
Just finished my second bottle of Apriso (mesalamine) and not planning on re-ordering
Just started up my second round of mesalamine enemas since it worked to help control the first flare while I was on it

Supplements:
Probiotics – from Ortho Molecular (on day 11 as of 2/11/14)
*Doc suggested I take their “really strong one” for 15 days, then go to their normal probiotic
L-Glutamine – “Mucosagen”, only on day 2
Fish Oil
Vitamin C
Vitamin D drops
Iron – for the loss of blood

I’m a 33 year old dude in Woodland, CA just livin’ the dream (or a nightmare lately…).