How Was Your Poo Today? 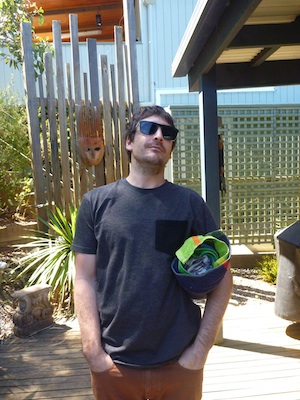 Hi my name is Harley, I’m 29 years old and am a kiwi living in Melbourne, Australia. I was diagnosed with UC in July 2011.

I enjoy playing guitar, keeping fit and hanging out with my girlfriend and friends. Enjoying exploring Melbourne city and the rest of the state. Would love to travel to south east Asia but feel Ulcerative Colitis is holding me back.

Mild pain, stools once or twice a day and are forming better. The other day I bombed a massive log and it was AWESOME! Have just switched to Mesalazine (3g in the morning) which is going good so far.

Symptoms before I was diagnosed:

How Was Your Poo Today

I was diagnosed with Ulcerative Colitis mid 2011 and was living in Queensland, Australia at the time. I started to get sick around April 2011 after returning from a holiday in NZ. I lost a LOT of weight, went from 83kg down to 66kg, and was going to the bathroom 10-12 times a day. I found it very difficult to find a doctor that believed I had something else wrong with me other than saying ‘oh you must just have a bad diet and drink too much!’ – which I don’t! Had all the tests you can imagine, bloods for allergies, a Barium Meal, saw a nutritionist even. Looking back now, I’d had two very mild flare ups four to five years before which only lasted for one to two weeks and thought it was just a random tummy bug.

I’m an Architectural draftsman by trade and found it very difficult to keep working and ended up leaving my job to get myself well again. Being in a smallish town I got put on a waiting list to see a specialist at the local hospital but was told I would be waiting for four months to even get a colonoscopy. Eventually my girlfriend had enough, so found a private specialist and booked me in for one at our own cost, SO glad that we did this as I was living in agony, couldn’t leave the house much because I was scared of being away from a bathroom.

At first, with my diagnoses I wasn’t really sure what it was or what to do, I didn’t really get too much information about it and was not put on any preventative medications. After being on Prednisone (side effects: sore eyes, blurred vision, headaches, dizziness, dream like state – 50mg tapered down to 5mg over a couple of weeks), I was feeling much better.

Me and my partner decided to move down to Melbourne after me feeling more normal again and didn’t really let it bother me too much until a flare late last year I booked into see a local naturopath to see if that helped. I also got on the waiting list to see a specialist.

After seeing the naturopath I got my bowel movements down to one to two a day, I had cut out wheat, diary, canned food, preservatives, basically went back to how our parents used to eat and preparing food from its original form. I also have suffered from headaches my whole life and found these where gone.

The Melbourne based specialist I see at the moment I find isn’t very personable and his IBD nurse is hard to connect with, they basically said to me diet has NOTHING to do with your condition, which I find so hard to believe and that they are actually telling people this! Before seeing the specialist and following the naturopaths suggestions I felt heaps better. But on showing these to the specialist he kinda just waved them of, they don’t have any proven evidence of working and the nurse mentioned that they have a ‘placebo’ effect.

I was put on Sulfazaline (Side effects: Popping ears, very strong antidiuretic) I found this drug didn’t help me much, still had soft stools and pain. And told I would be on drugs for the rest of my life…. I also did some research on the internet I found that this drug has symptoms like diarrhoea and abdominal pain exactly what they are trying to stop! It doesn’t make sense!

I have just finished a contact drafting role which I had been doing since moving to Melbourne. I was starting to struggle sitting down and not moving all day, as I’d get a sore, bloated stomach. Am looking at a career change at the moment, I’m considering furniture making and finding an apprenticeship. I’d like to know if anyone else has struggled with their line of work as I have, particularly if you sit down all day? This disease has really effected how I think about the future and what I can and can’t do. I’d also like to hear about anyone travelling with this disease particularly in south east asia and how it effected them?

I have just changed to Mesalazine granules and they are going well so far and have just been to my first IBD support meeting aswell, and found it good to hear other peoples stories. It also helps my girlfriend as she worries so much – probably more than I do! I have found with having UC we talk more about our ‘poos’ so much that our friends and housemates ask ‘How was your poo today’?

Some potty humour for you all!

– finished the round
I took all of these before I even saw a specialist, and felt really good.

I’m 29 years old and am a kiwi living in Melbourne, Australia. I was diagnosed with UC in July 2011.

12 thoughts on “How Was Your Poo Today?”

previousStop this Rollercoaster, I Wanna Get Off!
nextNew to the Disease, Tired of it Already