Courtney’s Journey from Crohns to Colitis 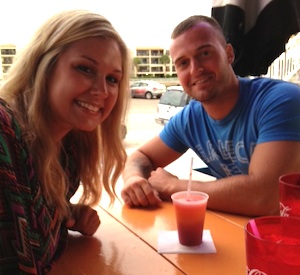 recent picture of me with my boyfriend

Hi there, My name is Courtney. 23 Year old who was originally diagnosed with Crohn’s disease 5 years ago but recently told my disease seems more like UC.

Recent college grad, looking forward to heading to Physician’s Assistant school in 2014! I have always been an athletic, outgoing and grounded young woman. Love my family to death and have the very best, supportive parents and boyfriend. I am currently living in Iowa and work on an OB floor at our local hospital (which I love).

So my story starts with my 18th birthday trip to Mexico. You know when the say don’t drink the water? Well they certainly mean that. I came home to constant diarrhea, terrible cramping and nausea. I thought for sure this was some bug that I had caught while on vacation, so I went to the doctor right away. I consider myself one of the lucky ones that I didn’t live for months or years with symptoms before I went to get treatment. Blood work, stool samples all came back normal multiple times so we took the next step.

My first colonoscopy: The day before I left for undergrad at The University of Iowa. Now scopes aren’t that bad once they knock you out and you wake up to your mom giving you warm blankets. BUT when you wake up to a doctor probing around in your butt, you take away a totally different experience. Regardless, my doctor told me I had mild Crohn’s disease and that luckily for me, however your disease presents itself is the way it’ll always stay….WRONG!! He put my on 2 pills of Asacol (not the 800mg pills) 3 times a day and sent me on my merry way. No teaching of what to expect, no explaining of what the disease actually was and no support. As you can tell I was not too fond of this doctor. Turns out this was not even a therapeutic dose of Asacol and even though Crohn’s patients are to be seen at-least every 6 months for check ups, he told me just to come down whenever I wasn’t feeling well.

I really shouldn’t be complaining this much. The first two years with my disease was fairly uneventful. Besides for my intolerance of the lialda that my doctor tried to switch me to, I had a good first two years of college. I still went to the bathroom more often than others but normal BMs, control of the urgency and virtually no pain. I switched to a doctor in Iowa City just so I could have someone close by in case things went south.

And oh boy did they go south. 2011-This is the time in my life in which I say “Shit hit the fan” (pun 100% intended). I’m not sure if all of my alcohol consumption the first 3 years of college finally caught up with me or maybe the stress from my increasingly difficult classes, but it hit and it hit hard. I’m not one for complaining, I never want people to know what I’m going through (it’s a terrible, terrible trait of mine and yes I’m working on it) so I kept this from my family and friends for a little while. It wasn’t until my boyfriend came to visit and watched my rolling over on the bathroom floor in pain, trying to not explode from both ends that he told my parents. Now my mother is a take charge woman, my sister has Autism so she has always had to speak up and make sure her children were receiving the best care. It’s one of the many triats I admire about my wonderful mother. So she forced me into the doctor right away (with her in toe of course) and a colonoscopy revealed a not so pretty picture. That mild disease I was told I’d always have had become moderate to severe in most areas of my large intestine.

From here I did a trial and error of many different medications. 6mp to start with prednisone. The steroid covered up my symptoms, which was great for a while, but eventually the 6mp never got to a therapeutic level in my system. Then came allopurinol to try and bust the levels. A year has gone by and my diarrhea has not improved, the urgency has gotten much worse and the nausea in the morning kept me from classes. Now as a college student the last thing you want is to be sitting in a lecture hall of 200 students taking a test and you find yourself needing a bathroom ASAP. So back to the doctor I go. Mid 2012 we change the prednisone to Entocort because by this time I was rocking the “moon face” and decided to try Humira. I must emphasize the fact that I was VERY anti biologics until I knew I absolutely had to. The idea that I was on this medication that I could never get off, it had all of these horrible possible side effects was absolutely frightening for me. But I took the leap and….nothing. About six months go by and not much improvement. So I took it to the next level, Mayo clinic in Minnesota, the power house of GI treatment. I saw Dr. Kane in the very beginning of 2013 and it couldn’t have been better timing. I was at my wits end, the stress and embarrassment of the disease had taken such a toll on me. I was not getting any better and I was starting to think I never would.

Dr. Kane was the first person to really question whether I actually had Crohn’s. Apparently Iowa City had a slight inclining that this might be the case but never took it any farther. (They also forgot to mention the dysplasia on my last scope, but who’s keeping track.) Dr. Kane believed that looking at my disease as UC rather than Crohn’s would lead us to better answers. She wanted to start me right away on Remicade. Another big decision for me to swallow, infusions were a scary thing, but I was desperate and knew she was knowledgeable enough to lead me in the right direction. It was either this or start talking about surgery and as a young woman just done with college and wanting to start my life, I couldn’t bring myself to admit defeat without trying all my options. So we started remicade that day. She also did stool samples, had me schedule a MRE and talked to me about all my issues and fears. For once I felt like I was getting answers that everyone els e just assumed I already knew about the disease.

So Remicade it was, the MRE showed no disease in my SI and UC was declared. Things were looking up, feeling a bit better, weening off of the entocort and BAM…stool sample shows C.Diff. Now part of me is completely grossed out and the other part of me is relieved. Maybe now I can take a round of antibiotics and the increased symptoms I had been having would be gone, remicade would kick in and I’d feel like a million bucks. Little did I know this C.Diff infection would turn into a 6 month long battle between Vancomysin and Difficile and no results. It was eventually decided that I was “colonized” with the bacteria (even though I’m not convinced of this).

So here we are present day. I see a GI doctor in Davenport who consults with Dr. Kane so that I don’t have to travel the 4 hours back and forth to Mayo for my remicade and visits. I just had a scope in June of 2013 and showed mild disease in most areas and no dysplasia. My diarrhea has subsided a bit but the urgency is still unreal. I have fears of going places because I don’t know where a bathroom is. I get anxious in car rides, hell just leaving the house to run to the grocery store makes me anxious and as I’m sure all of you know, this DOES NOT help the urgency. I feel like my entire life is centered around this disease and I have no clue when this thing called remission is ever going to hit. I know it’s a process and I will never go back to “normal” but I have got to get to a place where I have this under control. The feeling of hopelessness has affected my friendships and relationships and I’m ready to take back my life. Starting PA wi thin the next couple of months is horrifying for me if my health remains in this condition. I’m keeping up with my remicade infusions and my doctor is considering increasing my 6mp but I don’t feel like she truly understands the struggle of urgency. I have heard of different medications for that but she doesn’t suggest anything. I told her at my last visit that I was taking Immodium to help the diarrhea so that I could try to get along normally and she about bit my head off because I was “obstructing the normal process of the disease”. Which frankly I could care less, as long as I can get through the day.

I am very open to homeopathic methods of controlling my disease. I tried the SCD diet a few months back but then I got hit with the C.Diff and was told to eat differently. I am willing to try going back to this and also any other natural cures. At this point I will do anything. I don’t want to have surgery and feel like I am at the very edge of what else I can do medically so I need something, anything to keep me from having to take that drastic step.

Like I’m sure many of you can relate to, I feel like this (semi) short explanation of my struggle with this disease doesn’t do it justice. After proofreading what I just wrote, it seems as though so much more has gone on with my UC in the past 5 years but it’s hard to convey how this disease has truly affected me, on more than a physical level. There are so many small moments that make up your disease and your feelings towards it. But rather, it’s these large milestones, like med changes or doctor changes, that we relay to outsiders in the hopes of them understanding. It is a unique struggle that we all have in common. One that can swallow you up in you don’t fight like hell, it’s great to see others fighting the fight with me. :)

Asacol to Lialda, back to Asacol. Then to 6mp, prednisone and Allopurinol. Changed the prednisone to Entocort and switched to Humira. After the Humira we went to Remicade and 6mp to help boost it. I also take prenatal vitamins (the only source of iron my tummy could handle) and Calcium with Vit. D.

23 Year old who was orginally diagnoised with Crohn’s disease 5 years ago but recently told my disease seems more like UC.

9 thoughts on “Courtney’s Journey from Crohns to Colitis”