Stopping the Bleeding – My 10 Year Old Daughter Has Colitis

Hi. My ten year old daughter Rose has uc. We live in Utah in the US. I am at my whits end and need a breather :).

We’ve been managing her symptoms for the past nine months or so with scd diet.

Last June Rose had a painful poop that followed a couple hours after a movie and some popcorn. Two months later the same thing happened with a can of pineapple. The bleeding may have started back then. I have learned so much in the last year, yet i still feel so clueless.

We tried trusting our doctor, but the medications he tried had horrible side effects. I think prednisone was unnecessary at the time. Pentasa gave her stomach pain, and Balsalazide gave her a horrible cough- may have damaged her esophagus and caused her asthma. We went back to good old sulfasalizine.

We thought the asthma was bronchitis and gave her ONE dose of ibuprofen because she was in so much pain, which gave her an ulcer. We are hoping that her ulcer is mostly healed. She has had good poop, but we still are seeing blood on her poop and in the toilet. If she has more fiber there is more blood. We are wondering if she might have an internal fissure or hemorrhoids.

I am going batty.  I think the bleeding has been there all throughout this whole adventure. Her tummy hurts when she has to poo.

Should i just blend up all of her foods for the next little while?

Some of her poop was looking undigested. Sometimes she is farty, but it doesn’t smell. Should i just put her on an insane fast of chicken soup and scd yogurt? I tried cabbage juice, carrot juice. 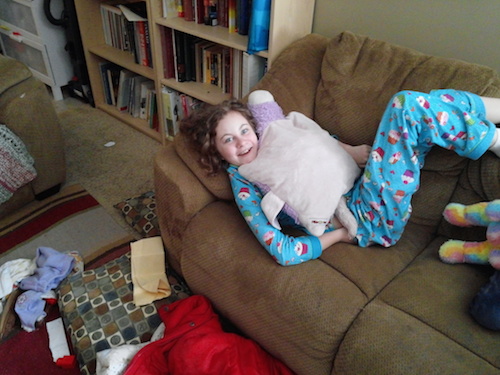 my daughter still having a good time:)

She needs food, i hate experimenting on her like a guinea pig. She is such a good kid and has been so patient with the ups and downs. I really hope to be able to help her heal over the summer so she can go back to school. She has missed soooo much. Any similar stories, thoughts, ideas and prayers would be truly appreciated. Thank You.

submitted in the parents & friends of UC’ers section of iHaveUC.com

My name is Suzie. I live in the West Jordan, Utah, USA. I’m 35 and my nine year old daughter Rose suffers from U C. She had her first flare with blood and diarrhea in November of 2010. We believe it was do to a contusion she received when she fell out of her bunk bed and the ibruprophen may have exacerbated things as well. Then about 4-5 months later her first flare happened and she nearly had a blood transfusion. Scary!