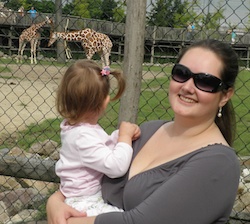 That’s me at the zoo!

I’m 26 years old and I live in Holland with my boyfriend and 3 year old daughter. I’m currently unemployed (caused by UC grrrrr). Colitis is giving me a very hard time.

I absolutely loooove music, it’s my life, really. Especially singing. I also love cooking and baking with my daughter, taking her to the swimming pool, having dinner with friends. I’m a real family girl. I am from Holland and I live in Leiden, I really hope to get in touch with the other dutchies on this website, if there are any? …

I was diagnosed with UC in 2008, but have had some symptoms since 2004. My major flare-ups were always caused by bacteria, like salmonella. Current symptoms:
– bleeding
– anemia
– gas
– mucus
– fatigue

I’m writing this, because I’m tired of the ‘silent suffering’ that is so often the case with this disease. Thank God for this website, because knowing you’re not alone makes a huge difference when you’re feeling so sick.

I’m very anemic right now because of all the blood loss I’ve suffered over the past few months. I’m in the middle of a flare-up that was triggered by salmonella this time. Luckily that has now left my body, but the damage had already been done: major flare-up! I’m having a colonoscopy next week, with anesthetics and pain relief, I’m glad.

The worst thing about being sick, is that I can’t do anything fun with my daughter, because I have to stay in the house for… well, you know.

Things got even worse when I lost my job, because I was on sick leave. No new contract. How am I gonna explain that when applying for a new job? “Why did you not get a new contract at your previous job?” Well… should I lie? This has actually happened to me before, a few years ago. I really really really don’t want this to become a vicious cycle, so I desperately want to get better.
I’ve started the SCD diet a few days ago, and it seems to improve things already. Less cramps, fewer trips to the bathroom. I hope this will keep getting better.

I’m quite lonely right now, colitis has not been good to my social life, because I’m so home bound. People don’t understand because you don’t look sick on the outside. They sometimes understand when you explain your symptoms in every detail, but that is something I hate doing. Who wants to have a nice chat with someone about poop? About really bad, slimy, bloody poop?

I’m very thankful for my mother, she is always a bit worried about me, and often suggests I lie down or just rest and do nothing. I never realize that is exactly what I need, until she tells me. I guess she knows me well!

I’m really afraid of any kind of operation I might have to undergo in the future. My doctor said that because of my first flare-up being so bad (pancolitis), the J-pouch was something that was probably in my future. I hate thinking about it. It’s been years since I was diagnosed, but for the first time, I don’t want to accept that I am sick. That I can’t work full time. That I have to ‘take it easy’. I wanna be young and energetic like everybody else! I want to have another baby, but am too sick right now to have a save pregnancy. I really hate this! My house is a mess all the time, because I’m too tired to tidy up and clean. My mother-in-law actually gives me a hard time over this sometimes. Mean!

I have to say, typing this is quite therapeutic.

My medication right now is mesalazine, 6 grams a day, 4 oral and 2 rectal. This has worked very well for me in the past, and at that time I was on an even lower dosage. Right now it doesn’t work that well anymore, though when I stop taking it (I have tried that… stupid) I go to the toilet 20 times a day, instead of the 6 times now.

I have had prednisone as well, but that was absolutely horrible. Constant heart palpitations and insomnia. I called my doctor up and I was really hysterical, and luckily I was allowed to wean off of those awful pills.

I’m 26 years old and I live in Holland with my boyfriend and 3 year old daughter. I’m currently unemployed (caused by UC grrrrr). Colitis is giving me a very hard time.

10 thoughts on “Sick, Lonely and Unemployed”