Round 3 in J-Pouch Surgery – What to expect next. 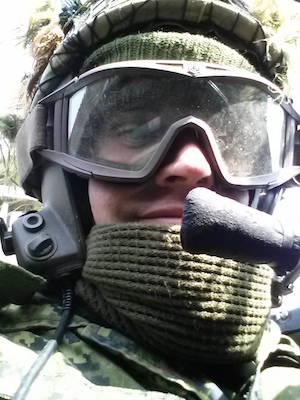 I am a J-Poucher, father, husband, Christian, soldier and former UC sufferer. I am from the East Coast in Canada, but currently live in Ontario, Canada.

I love hunting, fishing, baseball, hockey, fitness etc. I would include where I am from like Adam has asked in this section, but I already used up that space trying to fulfill my 25 word commitment in the above paragraph.

I don’t always have formed poops, but when I do, they are beautiful.

I no longer have symptoms of UC, and that is Awesome!

I just finished Round 3 of 3 in J-Pouch surgeries. I no longer have an ileostomy bag, and it is wonderful. But it didn’t feel that way at first…

I was scheduled to have my final surgery sometime in July. I was at the hospital, hooked up to the IV, had the gown on , the whole deal. And the surgeon came out, telling me that they couldn’t do my surgery because the fella before me had complications. This may have been a devastating blow to some people, but I was starving (having fasted for the surgery) and was more than happy to go eat. Not to mention that the surgeon was not the one that I had for my previous two surgeries, so it was kinda good, because I really liked the guy that had been doing the others.

I ended up having the final surgery a couple of weeks late with my original surgeon, so that was awesome. I got out of the hospital the next day after surgery, which seemed awesome, until 5 days later when I ended up in the emergency room with an abscess. I was in the hospital for 5 days and released on oral antibiotics. This would have been nice if it was the end of it, but nope…One week later I was back in the hospital as the oral antibiotics didn’t work. I spent another 5 days in the hospital and was sent home with a PICC line in my arm and on IV antibiotics for 10 days or so. This cleared things up and I have now been on nothing for about 4 weeks or so. I am going about 6 times a day to the bathroom with some butt burn every now and then and mostly formed poops.

So now why I got the abscess…

My J-Pouch had dilated and caused things to back up and cause a leak where my intestine was sewn back to together, resulting in the abscess. They were unable to drain it, the reason for the antibiotics. I don’t wish this on anyone…because of the dilation, it was very painful and felt like I was gonna die. It was probably the worst I had felt since before my first surgery. Pretty brutal.

To fix the dilated J-Pouch, the surgery puts me near out cold and uses some sort of instrument to open it up. Thank God I was out because I may have needed counselling afterwards if not. After he did this, things started moving along again and that’s when I was sent home on the antibiotics after a few days of monitoring me.

Now for the good part that I am home…

I now feel really good for the most part and am well on my way to being “normal.” I feel that I can do everything I could before I ever was sick.

I drink a shake with protein, peanut butter, skim (lactose free) milk, and a banana in the morning with 2 Imodium, and will not go to the bathroom until supper time usually. I eat whatever my wife makes for supper; which is usually meat and potatoes or something similar. I drink another shake before bed with 2 more Imodium and get up once during the night to go to the bathroom again. I feel the shake at night keeps me from getting up a lot, believe it or not. If I don’t do this, I am up 4 or 5 times a night with liquid, burning poop (if you want to call it that) coming out. The shake slows down the show. So I go when I wake up, before and after supper, sometime during the evening, before bed and during the night. That’s an average day, 6 times. Give or take.

I am still figuring everything out with this new setup but am so glad that doctors are able to perform this procedure and give people their lives back. I am very happy with the overall results. Its definitely a journey, but not too bad.

I take Imodium for the J-Pouch.

I take a multivitamin, whey protein and fish oil. I took this before I had a J-Pouch too. I also will take other supplements from time to time, but these are pretty much staples.

My name is Lewis. I am from Ontario Canada. I first saw signs of UC in March 2013. I was diagnosed with UC in Dec 13.

3 thoughts on “Round 3 in J-Pouch Surgery – What to expect next.”

previousGAPS Intro Diet and Meds Not Working For Me?
nextHow Are Your Logs?