Hilarious Hijinx of a UC Girl 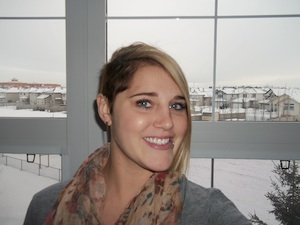 My name’s Teanna, I’m a 23 year old female and I was diagnosed with UC ten years at the lovely, vulnerable age of 13. I posted my story on here about a year ago, but I thought it was time to give and update and share some of the tough, wonderful, and hilarious things I’ve been through over the last year.

I’m from Alberta, Canada where we’ve had some lovely above 0˚C weather, a rare phenomenon for January.. but I suspect the -40˚C is on its way.. I play rugby and am graduating university in April where I’ll finally be a Registered Nurse! I’m pretty easygoing and very open about my UC (as you will soon see with some of my stories…), which I suspect 10 years will do to you!

Currently I’m nearing (fingers crossed), the end of a 15 month flare, and I’ve got 1-3 BM’s/day, semi-formed, no blood.. pretty awesome! Though it seems insistent that, even if I only have 1 BM in 24 hours it will inevitably happen in the middle of the night! I maybe sleep through the night once/week. But I’m not complaining if that’s the only time I’m going to go!

Hilarious Hijinx of a UC Girl

Quick background: Diagnosed at 13 after 3 months of trying to hide the fact that I was filling a toilet bowl full of blood 20x/day because I was mortified. Finally went to the hospital with pretty bad anemia and awful joint pain.

Both my last flares were from me going off of medication (did I mention my Doctor’s love me?!) and trying alternative routes (Jini Patel’s elemental diet, SCD, homeopathy, acupuncture, reiki, craniosacral,, EVOO, probiotics… I could go on but you get the idea!).

However in the course of all of this, I have some hilarious (maybe not at the time, but definitely looking back) stories of the ridiculous situations UC gets me into:

The time I pooped in a box: I was just parking and getting ready to walk the 2 blocks to the hospital for my nursing clinical when had to go to the bathroom. I quickly assessed my surrounding: Esso across the street, could be there in two minutes. Definitely too far away. But I wasn’t wearing a diaper as my flare was getting under control and I thought I’d be good (always be prepared!). Then I noticed a box in my backseat which contained a Christmas present I had just received. I grabbed it, dumped it out, undid my pants, sat on it, and did my thing… in a parked car on the side of the road! Luckily I had some napkins and hand sanitizer so I cleaned up and nonchalantly put the lid on and stuck the box in my trunk with plans to throw it out when I got home. But I ended up keeping it in there (gross I know, could I splurge for something I could clean out?!) and have needed it again. But don’t worry, Canadian winters mean it’s constantly frozen!

The time I pooped on the floor: Now this is a story for anyone who thinks UC is going to stop them from finding true love. I’m here to tell you that when you find a good guy/girl they will stick with you through it all and be there to comfort, console, and laugh at you at all the right times…

With my flare I hadn’t had alcohol in about 10 months (very smart!). But then I went through quite a tough time, where the University rugby team I had played on for 4 years, and was the captain of, made it to nationals and I couldn’t go (when I was in the hospital for my UC I ended up getting DVT in my arm and couldn’t play contact sports.. what are the chances?!). So to drown my sorrows I thought I’d have a few drinks. Well I had a lot of drinks. And when I got home from the bar with my boyfriend, who I live with, we went to bed. He woke up a few hours later and I was nowhere to be found… so he went exploring and found me standing in our front entrance way… and yes, I had pooped on the floor. My boyfriend said “Please tell me that’s Nutella!” Why, of all places, I had gone there (and not, say, into the bathroom..) I will never know. BUT my amazing boyfriend got me into the shower and cleaned me up (I was a mess), and then brought me bac k to bed. Where, surprise, I had also pooped. So he put the sheets in the washing machine and then put me to bed! I found out about a week later I had C diff, so my advice to everyone is C diff+UC flare+excessive alcohol=consequences

The time I pooped in a men’s room: This just happened to me yesterday actually. I had my last nursing exam of university and had been feeling really good for about 4 weeks. Wouldn’t you know my body would choose this time to decide to feel sick again (for about 3 hours… just the length of the exam of course..). I went to the bathroom before I left the house. Then once when I arrived. Then I had to again. But by this time everyone had started arriving for the exam. And if you’ve ever been in a hospital about 95% of nurses are female, so of course the line up was out the door. I had to make a quick decision: push my way through all of them with apologies (they’re nurses, they’d understand. But I still wasn’t sure I could make it since both the stalls would be occupied I’d still have to wait), use the men’s room, or go in my pants. I’ve gone in my pants enough times to say it was an easy decision! I just prayed no one would be using the urinal (and they weren’t!), though someone was in the only other stall! I just hoped they wouldn’t notice my girly shoes.. When I was done (and made sure the washroom was empty), I washed my hands and calmly exited into a hall filled with 100 students…

The time I pooped in someone’s yard: I was out for a jog, finally relishing in the fact that I could leave my house and not have to stress about where a washroom is! So naive.. My stomach started to get upset and, though it wasn’t as urgent as it used to be, I definitely couldn’t make it the ten minutes to my house. So I did a quick scan and saw a yard, with a fence all along one side. I waited until there were no cars and darted into the yard. I squatted behind a tree, right in front of there window, hoping beyond hope no one was home and no one would see me! I felt so bad, and tried to cover it up with some mulch.. I wiped with a leaf and waited about 5 minutes until I was sure the coast was clear (I couldn’t see cars/people on the other side of the fence!) and darted out of there!

Other places I’ve pooped: On the legislature grounds, in the dog park, on the side of the road, in a lake (I actually trailed behind a boat once so it would get washed away at the same time.. always nice to have an accomodating family!)

I hope these stories have brightened your day! Some of my stories are less funny, as there are about 100 others where I didn’t find a box/floor/men’s room, and pooping your pants on a bus/lrt/in class/walking/in your own home because apparently 10 feet to the bathroom is too far, is not as fun as it sounds. And cleaning yourself up in a public washroom is messy business! But you get through it, and if you’re lucky you get through it with a smile on your face and good friends/family beside you.

Thanks for this site Adam, the advice, encouragement, and simple realization that you’re not alone, is an amazing inspiration.

How do I post a picture with my story?

Hey Teanna…yes indeed…you for sure figured out how to post your picture, but thought I’d include your question for others who might be wondering the same thing.  So…whenever someone fills out the story submittal form, you should get a notification saying THANKS, and also instructions on how to include your picture.  All you need to do (and great job again for figuring it out) is email me a picture of yourself afterwards to the email provided and I’ll include it in the story.

Best to you for getting the 15 month flare figured out!!!! WAY TO GO GIRL!

I’m 22 and I’ve had UC for 9 lovely years. Was diagnosed at 13, which of course helped me through my already awkward, mid-puberty stage.. How can trying to hide toilets full of blood, diarrhea 20x/day, zero energy to do anything with friends, losing a lot of weight which wasn’t there to lose in the first place.

16 thoughts on “Hilarious Hijinx of a UC Girl”