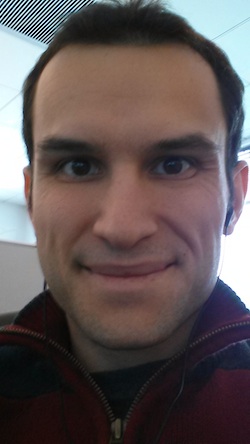 My name is Evan. I am a 26-year-old from Columbus, Ohio. I was diagnosed with UC a little over a year ago and have been dealing with the symptoms for about a year and half. I have recently switched my GI doctor and currently see a chirporactor to help alleviate some symptoms.

Before I was dianosed with UC, I was an avid runner, enjoyed going to the gym. I enjoy working on/restoring furniture in my spare time. I am engaged and will be married in May 2014. We have a 1-year-old Pug named Kirby. I like the outdoors and relaxing at home.

It seems that my symptoms have lessened since seeing the chiropractor and changing my diet. I often experience lose BM, blood loss, fatigue, going 10+ times a day, cramps, dizziness.

My story with UC begins in late 2012, shortly before the Thanksgiving holiday. My fiancé and I had just got our new pug puppy and celebrated our 5 year anniversary. I began to notice that I was going to the bathroom more often and there was mucus in my stool. I thought that the stress of the new puppy, moving to a new apartment and the upcoming holiday was just causing some increased stress and causing my GI to act up. I decided to go to the Urgent Care to see what was going on. The doctor mentioned that I might have a IBD, or IBS and prescribed me Bentil to calm down my GI. It seemed to work for the short-term, but symptoms quickly came back after the prescription ran out. After visiting my family doctor, he had suggested to run a few blood tests, stool tests, and referred me to a GI doctor.

After meeting with my GI doctor, it became apparent that I needed a colonoscopy to see what was happening. At this point, I was experiencing blood and mucus in my stool, extreme fatigue, and extreme weight loss. The procedure revealed that I had UC. Relieved that I had an answer to my issues, I began a regimen of Mesalamine enemas and Apriso. About a month passes and I felt like I was in remission. Soon after that, I had a set back and the medication was not working anymore. 6 months after my first colonoscopy, I had a follow up colonoscopy which revealed worsening symptoms.

My GI prescribed me Humira and I began the interesting journey that this drug offers. 3 months after taking Humira, I was not seeing any improvement. At this point, I had lost a total of 50 lbs and was a shell of my previously healthy self. I set an appointment with my GI to discuss the next steps but prior to that meeting I checked myself into the local hospital after having 2 of the worst days of my life with UC. I was going 20+ times a day, couldn’t focus at work and my fiancé was very concerned. The hospital ran a scan that revealed acute UC (big surprise right?). The hospital doctor prescribed a 5-day regimen of Prednisone to knock out this extreme flare.

I met with my GI a few days later, and he decided that my Humira was not working and wanted to explore the possibility of surgery. At this point, I was experiencing UC for less than a year and did not like the direction these conversations were going. I ended my relationship with my GI (thank god). Among other things, he didn’t seem to understand the condition and I felt like I was just another patient he wanted to get money from.

I have not seen a new GI in about two months, but was able to secure a meeting with a top GI group in Columbus for 2014. In the interim, I decided to visit a Chiropractor at the recommendation of a friend. I was adjusted in December and immediately noticed an improvement in symptoms. Less frequency, less urgency, overall improvement. Not perfect, but better.

UC has definitely changed my life immensely. I have lost 50 lbs, I cannot exercise without being winded. My family and friends, although supportive, do not understand UC. I don’t blame them, it isn’t exactly relatable unless you go through it. The worst part of UC (for me) is the urgency and waking up in the middle of the night to go to the bathroom. There have been may times that I wanted to just give up, quit work, and lay in bed until the flare subsided. Luckily, I didn’t allow myself to do that.

I am sure that many of you have the same goal and it seems fitting with the New Year. I am fully committing myself to the SCD diet, seeing a new GI, continuing the Chiropractic treatment. I won’t let UC beat me. 2014 is a huge year for me. I am getting married, I will be in line for a promotion, and if UC wants to stand in the way of my success…let it try, UC won’t stop me.

My journey has just began, but I feel that staying positive is key to beating UC. It has been extremely difficult for me personally to deal with UC, but with the support of my fiancé, friends, and family…there are more positive days than negative ones. Remission could be just around the corner, and you have to keep up that hope.

My name is Evan. I am a 26-year-old from Columbus, Ohio. I was diagnosed with UC a little over a year ago and have been dealing with the symptoms for about a year and half. I have recently switched my GI doctor and currently see a chirporactor to help alleviate some symptoms.