Would Love Some Advise!

recent picture of me

Meet the biker from Texas:

YO! My name is Ragnar and I live in Austin, Texas. I’ve been here for a couple years and I own and manage a pedicab company. Yes, even someone with UC like myself can haul around a bunch of people on a tricycle all night! I also love to ride motorcycles, bicycles, swim, travel….

I’m going through a pretty tough time right now and it is definitely a big help to hear from some people who have also been dealing with IBD. I have been having moderate to severe symptoms for a little over 2 years but I’ve always had a sensitive tummy growing up. The health insurance that I have is very minimal so getting an appointment with the GI doctor is a nightmare.  It took me almost 6 months since I saw my primary to get a colonoscopy and be diagnosed. Apparently I have Ulcerative Colitis and not Crohn’s but it seems like the symptoms and drugs are very similar.

In May they put me on Prednisone and Asacol which made me feel a whole lot better for a while. I was on the Prednisone for about a month and stayed on the Asacol through this whole time. My symptoms where very mild after the prednisone but returned in August perhaps related to slightly more than normal alcohol intake. I don’t drink very often but I did one day in August and it seemed like the symptoms returned and persisted until this day. I went back to the doctor and they put me back on the prednisone for another month. It helped for maybe the first week but the side effects were so horrible they basically outweighed the positive. I stayed on it anyways but I’ve been in worse shape than ever.

It’s pretty hard to do anything fun or go to work. 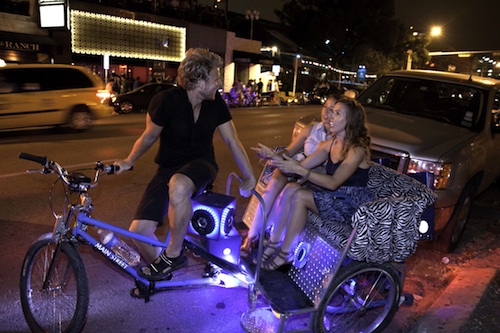 I own my own Pedicab business, and here I am cruising the city of Austin, Texas.

My parents are pretty worried about me as well since my attitude about the whole thing is pretty negative. I’m usually a very positive and outgoing person but this disease has really dragged me down. I’m nervous about taking any more drugs because their side effects. I’m considering going to a homeopath or perhaps acupuncture but I also don’t want to throw my money away. I’m also contemplating doing a fast for a few days to see if that can alleviate my symptoms. It’s just hard to be hungry when you’re alone and already kind of depressed. I feel like I’ve tried every damn diet there is and with no success! I’ve been on SCD for about 8 months with little or no improvements.

I would love to have my symptoms under control to the point where UC is not limiting my freedom to be happy and do what I want to do.

Horrible experience with Prednisone the second time I took it. Been on Asacol for a while but it doesn’t seem to be helping a whole lot.

I live in Austin, Texas and I have ulcerative colitis.

AND, I ride bikes around all day for my business.

36 thoughts on “Would Love Some Advise!”