When You Have to Go Number Two on the Bus 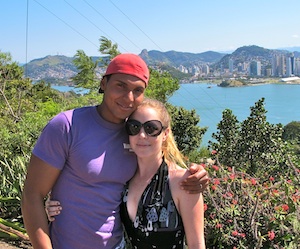 I am a 26 year old English teacher in Brazil. I love running (when my symptoms let me), traveling, and spending time with my husband! I am originally from Seattle, Washington, moved to Spain after college for two years, and now have lived in Brazil for two years! I teach English to public school students who otherwise wouldn´t have English classes (through a state funded program).

I love all things outdoors….but am terrified of riding the bus. Not just because Brazilian bus drivers are crazy, but because there are usually no toilets on public transportation. I play classical flute sometimes….and love listening to terrible music. Pop, rap….reggaeton.

When Remicade, SCD, and Paleo don´t work…..and you have to go number two on the bus

i remember having abdominal pain and bloating long before my diagnosis, but I always attributed it to food sensitivities or stress.
In April 2011 I started to have severe abdominal pain and blood, and I knew something was wrong…I was living in Spain at the time working as an English Teaching Assistant, and luckily had a great insurance plan. After many tests and Dr.´s visits I was diagnosed with pancolitic UC. I started taking mesalazine (oral and enema) and prednisone. I was hospitalized for a week when these medications didn´t give the results that my Dr. hoped for. Once I was released from the hospital I continued the same protocol, and was fine for a couple months. I headed back to the USA for the summer, and as soon as I got there things got much worse. I lost 20 pounds, and was on 70 mg of prednisone. I started to vomit all my meds and wasn´t sleeping because of so many bathroom trips. I was hospitalized again and put on Azathioprine. When the inflamation got so bad that they were considering surgery we started with Remicade, and within a few days I was much better!

As soon as I got out of the hospital I was off to Brazil for a new life with my then fiancé (we met in Spain, and with the financial crisis in Europe decided to try our luck in his native country, Brazil).

I was OK for about a year, but in fall of 2012 things started getting worse again. For the past year I have been off and on prednisone, and struggling with pain and frequent bloody bowel movements.

I feel like the Remicade isn´t working, and all of these drugs are just being continued because my Dr.´s don´t know what else to give me.
I tried SCD for a few months, and when that seemed to yield no results I started the Paleo diet. When that seemed to make no difference I tried the Paleo Autoimmune Protocal….(basically grain free, egg free, no nightshades, and no legumes). Now, to eliminate more possible problems like SIBO I also have stopped eating starchy tubers, and high FODMAP foods.

I feel like I can´t eat anything and nothing is working!!!!
I really want to believe that there is a natural solution, but I am getting more and more discouraged (and skinny).
I am supplementing with amino acids, and fish oil, as well as a multi vitamin.

How Not To Give Up Hope?

I am so thankful to have a husband who supports me through the rough days and nights….and all of my crazy dietary adjustments, but one of my greatest fears is that he, and the people around me will get fed up with me and this illness and give up, which brings me to my biggest current problem. How not to give up.
Every new thing I try brings me a new excitement and hope to conquer this disease, or at least get it to nap a bit. I was thrilled with the idea of SCD, and did the intro diet…and then ended up in the hospital. I was also super excited to try LDN (which I am still taking) but have noticed no major improvement. Then I was completely convinced that Auto-Immune Paleo would solve everything…..while I have felt a bit better, I still have to wake up two hours early to spend a big chunk of time in the bathroom before work if I don´t want to risk a messy bus emergency.
All I want to do is go back to being the happy, energetic, I can do ANYTHING girl that I was before I got sick. I want to run, and laugh, and go on a car ride without having to worry. I want to go out at night without falling asleep at the dinner table. Unfortunately these days I´m feeling more and more like there is no solution…and that nothing will work. I am becoming a sad-eyed introvert who would rather stay at home on the couch rather than go to a BBQ with friends and no bathroom. I dread the question `How are you doing?´ because I don´t know whether to lie and say that I am fine, or tell the truth and seem like a whiny kid.
I would love to here from you guys what makes you feel like getting up every day, and what gives you hope…and keeps you from sitting down and eating a whole pizza, because your stomach is in knots anyway!

I am a 26 year old English teacher in Brazil. I love running (when my symptoms let me), traveling, and spending time with my husband! I am originally from Seattle, Washington, moved to Spain after college for two years, and now have lived in Brazil for two years! I teach English to public school students who otherwise wouldn´t have English classes (through a state funded program).

previousDelzicol is the “new” Asacol – Are you f***ing kidding me?
nextWhat Is Going On Up There!