What Doesn’t Kill You Makes You Stronger 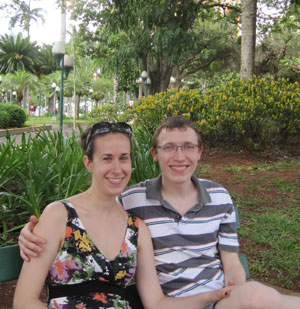 Polly with her husband in Brasil

I haven’t submitted a story in awhile, though I have thought about it many times. My original story was back in April 2012: https://www.ihaveuc.com/recently-diagnosed-need-help-what-happens-with-your-job/

I didn’t really say much about myself in my last story… my name is Polly and I’m 30 now and my husband and I still live in Minneapolis, MN, USA (We actually bought a house in NE Minneapolis this summer!). My hometown is in Appleton, WI. I’m generally pretty funny and laid-back. I’ve been blessed in the area of common sense. I used to love to travel and really traveled quite a bit before I got sick… I studied abroad in college and after college I spent 3 years teaching overseas… one year in rural Guangdong Province, China, one year in Santiago, Dominican Republic, and one year in Rio Grande do Sul, Southern Brasil. My mom is from Brasil, (so I spell Brasil the Portuguese way, not the English way with a “z”). As a child, I spent quite a bit of time in Brasil. I am fluent in Portuguese and Spanish and I used to love to dance. My husband is an architect and we have 12 nieces and nephews.

Some more about Polly:

Ok, so I’m not an avid Kelly Clarkson fan by ANY means, but when I was on sabbatical (see explanation in my story), “What Doesn’t Kill You Makes You Stronger” was seriously my jam. There is one line in the song that was so empowering to me at the time — “Thanks to you, I’m finally thinking about me”… it all goes back to realizing that my health was WAAAAAAAY more important than my job and making lifestyle changes to support that.
For the record, I mostly listen to music in Spanish… some of my favs – Marc Anthony, Juanes, Bacilos, Mana…

I spend pretty much all of my free time doing research online for alternative medicine treatments. I also LOVE helping people through alternative medicine… giving health suggestions to my crohnies or helping someone at work… referring them to a quality alternative medicine doctor… I want to end people’s suffering… so sharing what I learned in Herbalism classes and through individual research… that’s probably my calling.

I am currently having pieces/flakes of mucus and a little blood every time I go to the bathroom. I had a few days where I was like a “poop factory” and now I’m just going once a day in the morning, with the mucus flakes and blood the rest of the day. And I currently can’t eat anything (other than the wilted spinach)… so losing a bit of weight too, feeling weak, abdominal pain…

So I have had quite a health journey in the last couple of years. My job, that I wrote about in my last story, was my #1 priority in my life at the time… times have changed, and I have changed. My former employer was more or less understanding, although I was denied short-term disability and therefore my medical leave was unpaid… after I returned from FMLA (unpaid medical leave), I immediately put in my 2 weeks’ notice and left that job. As I look back now, I realize that I was not at all ready to return to work. If I had stayed away for longer, maybe I would have stayed at that job, but I was just too scared back then. Oh well. I had the flare of all flares from the end of March of 2012 to about the end of June of 2012, and then I considered myself in remission starting in December of 2012. I had been in remission from December of 2012 through about last week.

So, I have changed quite a bit… I used to be career-oriented, and as I mentioned, my job was my #1 priority. I’m not like that anymore. I have a job, not a career, and my health comes first. It’s not worth killing yourself for a job and putting your health on the back-burner, and getting worse and worse until finally your body crashes. No bueno. I have been working part-time since July 2012.

So, my health journey… after I got the UC under control in Dec. 2012, I went on my merry way… on a restricted diet, but still more or less happy and, at times, I was able to forget I even had UC. In April of 2013, I got a UTI (urinary tract infection) for the first time ever… and after that, had 15+ months of misery. About every other week or more, I would get terrible UTI symptoms. I tried everything: herbal remedies, teas, TCM (Traditional Chinese Medicine), seeing Western doctors and their antibiotics, crazy stuff – shots of pure apple cider vinegar, etc… I saw the best (supposedly) urologist in the state of Minnesota, and his diagnosis was

So UTI symptoms with no infection… they did ultrasounds and urine cultures and found nothing and he basically gave up and told me “some people just have bad luck”. That was obviously not acceptable, as it basically took my life away… so I went back and saw my Herbalist (for those of you in the Twin Cities… go see Matthew Alfs at Midwest Herbs & Healing in Roseville, Highly recommend)… and I had seen him about my “phantom UTI” issue, and once the urologist ruled out other things he said, “I wonder if it is an irritation from a food allergy?” So in I went for food allergy testing and it came back that I was allergic to dairy (which I really didn’t eat that much dairy before anyway… just small amounts of organic dairy in condiment-sized portions), some nightshades, and peppers. Once I cut out dairy, my symptoms reduced drastically. But then, I started getting the same “phantom UTI” symptoms to foods that I had eaten forever… eggs, sweet potatoes, rice, quinoa… so I decided to go paleo/candida diet for a few months and see what happened, and that did help… but it is extremely frustrating that my body keeps developing allergies to foods that I could previously eat. So before this flare, I was only eating certain vegetables and wild salmon. And right now, I’m just eating wilted spinach, since my body is basically not letting me eat anything at all. So if anyone has any advice on stopping this growing list of food allergies/intolerances, you will be my hero forever.

So this flare that I’m in currently is NOWHERE near as terrible as the flare of 2012. I’m just doing everything I can to prevent it from getting worse.

Also for those of you in the Twin Cities area, I would highly recommend taking the Herbalism certification courses at Normandale. SUPER interesting stuff!

I have found some friends here in the Minneapolis area, I call them my “crohnies” (as the majority have Crohn’s) and it’s been wonderful to share advice, ideas, stories, struggles… so Crohn’s/UC affects everyone differently!!! I happen to be EXTREMELY food sensitive, and I have been since I was diagnosed. I cannot eat out. Ever. I do not eat processed food. I only cook things that I made myself and I only buy organic. So that’s a huge struggle for me. I don’t travel anymore, as I don’t know what I would do for food. My husband and I did got to Brasil this January (his first trip) and it ended up being OK, as I stayed at my grandparent’s and other relatives houses and cooked for myself, but still was not able to partake in eating out or ordering in, birthday parties, etc. That is one of the hardest UC struggles for me… Food is such a big part of culture in the US and everywhere else, but I decline invitations to go out to eat and/or being invited to dinner at a friend’s house or potlucks… whenever there is a potluck event at church, I just don’t go to the fellowship event. It is too exhausting to explain to people that you just met why you are not eating. When forced to say something, I usually just reply with a laugh and a “oh, I’m allergic to everything!” And as I’m sure many of you know, people try to be helpful at say, “oh, but can’t you eat this” (and point at a piece of white bread) or “this is gluten free”… be that as it may, it still probably contains, soy, eggs, dairy, sugar, corn, canola, MSG, whatever. People try to be helpful and take you to the table of food and be like “show me what you can eat” and then have to reply: “nothing, literally there is nothing at this entire table that I can eat”. Oooo… so I feel myself getting a little cranky as I’m writing this paragraph. Time to move on, Polly.

So I currently work with a girl who was just diagnosed with Crohn’s disease. She is currently off all meds and she can eat whatever she wants… I am amazed daily as I see her walk in with a Starbucks cup, drinking pop, eating food from Jimmy Johns or Chick fil A. That stuff would literally KILL me!!! But yeah, it’s different for everyone, which makes everything so much trickier. There is no one magic cure. I am sensitive to everything… I use all natural cleaning supplies, cosmetics, soaps, detergents, etc. I can only eat organic… if I eat some non-organic veggies (so has pesticide residue on in or whatever) I will have D for a few daaaays.

So my hubby is pretty amazing. He never complains and he is so supportive and even though I work part time and he works full time, if I’m too tired to do the dishes or whatever, he comes home from a long day and does the dishes… he also eats what I eat at home and when we’re at a friends house and they ordered pizza or something, he won’t eat it because I can’t eat it. He is just too sweet.

So currently I am flaring a bit. Eating wilted spinach cooked in coconut oil. Down to 110 lbs. (And I’m 5’7”). Trying to hydrate and rest. Feeling pretty weak.

I haven’t seen my GI in a couple years. I found a GP in Minneapolis that is OK. I have my herbalist (seeing him on Friday) and my chiropractor. I also have been going to acupressure sessions every other week for the last few months.

Oh, Adam, could you do me a favor, please, and post a link to your amazon site? I am a big amazon shopper and I tried to figure it out the other day, but I just couldn’t find it… please and thank you. ☺

I am so looking forward to everyone’s comments!

**Considering adding Boswellia for this flare. Will discuss with Herbalist on Friday** 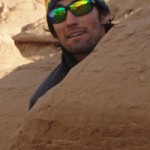 Here is the link to the: iHaveUC Amazon Store (and I just made a special page called “Polly’s Shopping List“)

11 thoughts on “What Doesn’t Kill You Makes You Stronger”