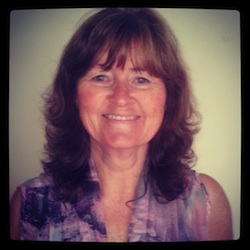 Some interesting stuff about Coralie:

I’m from New Zealand. I’d love to visit Italy after seeing the film ‘All you need is love’ plus I just happen to have read alot of stories recently that are set in Italy. I like to paint but haven’t been inspired too much lately because of family issues.

Currently, I am managing ok with a gluten free diet and drinking lactose free milk. Digestive aids seem to help with lactose intolerance also. Sometimes when I’m out I have panic attacks – where’s the nearest toilet? And very occasionally I don’t make it to the loo in time – luckily this has always happened at home. I also have back problems and you can be sure that as soon as I lie down on the yoga mat and start to do my stretches, I have to get up and make a run for the loo. What’s that song? Life is a battlefield? Yeh baby!

Trailers for sale or rent, rooms to let, fifty cents (wrote fifty instead of 50 to use up more characters)
No phone no pool no pets
I ain’t got no cigarettes
Ah but, two hours of pushing broom
Buys a eight by twelve four bit room
I’m a man of means by no means
King of the road

Rooms to let fifty cents
No phone no pool no pets
I ain’t got no cigarettes
Ah but, two hours of pushing broom
Buys a eight by twelve four bit room
I’m a man of means by no means
King of the road

I can’t believe that’s still not enough words. Man. There. Did it.

Medications and some more info:

I haven’t been on the site for a few weeks as been through the mill with my two sons. Remember that cool programme ‘My Three Sons’?. Well, I wish it would come back on air. It was a Nice programme and Uncle Buck was always good for a laugh. Back to why I am here today. Remicade, otherwise known as Infliximab.

I have been on this drug since about October 2011. It is administered every couple of weeks initially by infusion at the hospital and then every two months. From the very first dose I wondered if it had caused my head to itch. But I couldn’t be sure because I had just dyed my hair and thought it might be that. But each time I was given a new dose my head began to itch minutes afterwards but it would go away. All of that time my skin has been excessively dry. I have had to use emollient on my legs and wrap them in cling wrap throughout the winter months. I scratched my back raw. I thought it was just old age. I’m 52. Then in October I had a dose. After a few minutes I went bright red from the neck up and my head and back itched profusely. The nurse stopped the drip. They put cortisone in the drip and gave me antihistamine tablets. After about 30 mins the redness faded and the itching eased. They continued the drip. On the 12th Dec I had my last dose. After a few minu tes I felt a strange sensation in my throat. I didn’t hesitate to push the buzzer to summon the nurse. This was lucky because another minute or two and I couldn’t talk or lift my arms off the bed. My throat felt constricted and I opened my mouth to make breathing easier. My face swelled so fast it was like inflating a balloon. I was scared. I couldn’t communicate apart from nodding or shaking my head. I was in tears and the nurse told me not to cry as that would make me breath faster. The curtains were pulled around my bed and after the nurse checked my vitals and stopped the drip she started to leave the cubicle (for good reason) but I wanted to call out “Don’t leave me!” and I couldn’t. I was becoming drowsy and everything felt heavy. I could not lift my arms off the bed. Different body parts were suffering random violent spasms. I heard my phone receive a text. I didn’t even have the wherewithall to ask the nurse to check it for me. Shortly thereafter a doctor arrived. “What seems to be the problem”? “The problem seems to be that I have a man posing as an incompetent doctor at my bedside!” Then he started shouting at me to open my eyes and lift my arms. He shouted repeatedly at me and I couldn’t do as he requested so I just managed to say “I hear ya”.

So, if you are put on Remicade or Infliximab and you get the itching don’t dis it as hair dye or old age or anything else. Take it seriously. It’s the drug! Keep a close watch and heed the warning bells. If I hadn’t pushed the buzzer when I did, I wouldn’t have been able to and would have gone into anaphylactic shock because the curtains were closed around my bed and nobody could see me.

Now I am controlling my UC symptoms with a gluten free diet and digestive enzymes to help with dairy products. Plus I am still on Pentasa.
Merry Christmas everybody : )

Hi, I am a 52 year old female, divorced with three grown children. My daughter still lives with me as she has Charcot Marie Tooth and requires regular care and assistance throughout the day. I completed a teaching degree in 2004 and began what I thought was going to be lucrative teaching career.

previousCure to UC — J Pouch
nextSo No Colon or a Chance of Cancer or Death? umm…