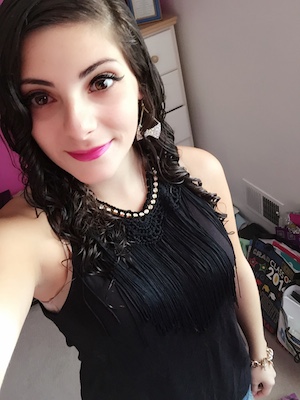 I lived a pretty normal life before I got UC.

I went to community college where I studied nursing. I watched a lot of TV. I hung out with friends. I used to eat basically anything that I wanted. I don’t really know what suddenly caused me to flare up because it’s not like I changed my diet or anything. My doctors said it was probably stress but I didn’t feel any more stressed than usual so I don’t know. This disease sucks.

I have a lot of pain, usually in the morning and at night. During the day I’m usually fine but that might be because I take a pain killer when I wake up and it lasts me through the day. I had bloody diarrhea for about 3 weeks before I finally decided to go see a doctor, the blood has stopped now, but I still have the diarrhea.

I went to the ER one night because I was having a lot of abdominal pain and I wasn’t actually expecting them to find anything, but they did a cat scan, and the doctor told me I had colitis. He didn’t really give me any other info so I went home and made an appointment with my GI doctor. The next morning I woke up with so much pain, I didn’t even want to get out of bed, but I went to see the doctor anyway because I wanted the pain to go away. I was thinking that she’d give me some kind of prescription and I’d be cured. Sadly, she sent me back to the hospital, where I stayed for the next 24 days.

They did a sigmoidoscopy and confirmed it was Ulcerative Colitis. It was pretty awful, I was in constant pain, I didn’t want to eat anything, I ended up losing about 15 pounds and becoming malnourished. I was only 115 to start with so now I’m down to 100 pounds, that part didn’t really bother me though because I w anted to lose some weight anyway. I had to get a blood transfusion and iron because my hemoglobin levels were so low. I was even on a cardiac monitor because my heart rate was really high.

The hardest part during that time was the lack of understanding from my family and friends. My parents thought I was faking the pain and thought I was addicted to morphine, which I wasn’t. My siblings were mad at me because they thought I was stealing all the attention from my parents. A lot of my friends never visited me or asked how I was doing. I felt pretty alone and I cried a lot during my time in the hospital.

I finally made it home after spending 3 awful weeks there and I’m doing better. I hate having this disease though, I feel like I’m constantly sad now because I’ll never live a normal life again.

Colitis Medications and How that is Going:

My doctor wanted me to take Humira but my parents didn’t want me on such a heavy drug, but after 3 weeks of seeing me suffer, they finally agreed to let me take it. Unfortunately, my doctor found out that I have inactive tuberculosis so I didn’t qualify for Humira. I’m currently taking 60mg of Prednisone and 1600 mg of Asacol. I’ll have to take tuberculosis medication too, in case I ever really need to take Humaira. So yea that’s my story of how I suffered with UC.

I hate this disease and I’m scared of having another flare up.

leave her a comment or write her a question below!

Hello! My name is Virginia and I’m 20 years old and just got diagnosed with ulcerative colitis about 4 weeks ago. I’m a nursing student but unfortunately had to take the semester off due to being in the hospital for so long. I was pretty healthy before I got UC, I feel like this disease just came out of nowhere and I hate it.