Untreated UC kind of Freaks Me Out 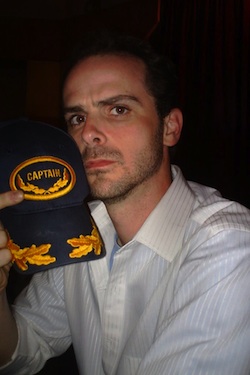 So, I’m a CPA, but don’t let that stop you from reading. I was diagnosed with UC in August 2008. Most of my job is speaking and training, so I’m on the road a lot and in front of the classroom a good deal of the time. Ulcerative Colitis has caused me to get really creative in coming up with a reason we’re taking a 10 minute break right after we get back from lunch. I’ve had my fair share of really embarrassing moments with this stuff, but I won’t go into much detail for you now just in case you’re eating.

Anyway, since my diagnosis, I’ve been in a study for Humira that pretty much controlled the disease, but I’ve never really been in full remission. The GI for the study was great and all, but not much into diet (no surprise). So, my wife googled and googled and we stumbled on this site.

Something interesting about myself – hmm…well, I tried to be an actor for a short time before deciding on the whole accounting thing. My dream was to be a SNL guy, but that quickly came to a close when I realized that, funny as I can be sometimes, my main job was as a waiter at the Macaroni Grill. I was able to be in a few things that I’m proud of over the years, but just couldn’t scrape together a living from it. That said, if any of you know Lorne Michaels, I’m happy to give it another shot.

I’ve recently come off Humira and my symptoms are still mild. I’ll visit my porcelain buddy about 3-4 times each day and usually in a hurry. Bloating, gas, some abdominal pain, it’s all there, but in mild form. There is still some blood from time to time as well.

Untreated UC kind of Freaks Me Out

Way back in 2004, I was at a conference for work. We were all eating lunch and all of the sudden, I felt my stomach turnover. I made up some excuse and RAN to the bathroom. Didn’t quite make it, but I was close enough to not be seen by anyone. I stayed in there for about 30 minutes trying to clean everything up and come up with a story to tell my coworkers so they wouldn’t ask any questions. I wasn’t sure what exactly happened, but I just chalked it up to bad Mexican food or something. The next few years, that situation turned out to be just the start. I had many instances like that, and many were worse. I got married in 2005 and my wife begged me to go to the doctor. I didn’t. Finally, after a fight about my health, I complied (like a good husband). The doctor I saw was HORRIBLE. All he did was tell me to start taking Immodium and stop worrying about it. Then he charged me $300. I was done with doctors.

3 years go by. It’s 2008 and I’m playing in a charity golf tournament. Before we arrived at the course, my boss and I stopped and got a White Chocolate Mocha at Starbucks. This was a bad idea. I’d angered the almighty Bowel Gods. It was the last White Chocolate Mocha I’ve had. By the time we reached the second hole, I knew this was going to be a bad day. I told my group that I was feeling sick and needed to go to the clubhouse really quick. Didn’t make it. Same thing happened on the 5th hole. Then the 8th hole. And on and on. I tried to hide it from my group. Luckily it’d rained the night before so the course was pretty muddy…if you know what I mean.

So, I texted my wife that I was having a less than great time. She called the doctor and I was scoped about a week later. About 6 months after my diagnosis, my GI suggested going into a study for Humira. I ended up doing that and saw my symptoms get cut in half with the occasional flare. That study ended in August 2013. The quote I received for Humira was about $1,000 per shot…just a bit out of my price range. I mean, $900, sure. But, $1,000, c’mon.

As I was exiting the study, they tested me for TB and guess what? Yep. Positive. So, that’s cool. I’m now taking INH medication to kill the TB for the next 9 months. No Humira or any other drug.

So, my question, fellow UC’ers is this. What should I do? I tried the SCD for about 2 months and went nuts! I felt like a drug addict that just needed one more breadstick fix. I’m thinking about scaling up to it again since now I don’t have a drug as a safety net. I’ve also heard about this guy – http://www.drdavidwilliams.com/ulcerative-colitis-natural-treatments#axzz2h62FayYw. Anyone heard of him or is he a quack?

My GI wants me to go on 6MP or Remicade. I really don’t want to get on these medications that just seem like black holes. I’m kind of freaking out. My symptoms are fine for now, but I feel like I’m just waiting for the other shoe to drop.

Should I just suck it up and do the SCD or the alternative stuff Dr. David Williams is suggesting (see link above)? Or, should I get on some real meds that will cost me pretty good, but have a little more science behind them?

I’ve taken a bunch of these things, but have the most experience with Humira. It cut my symptoms in half, but my GI was never really happy with the results. Asacol, Enticort, Apriso all didn’t do much for me either. Prednisone did, but I looked like Grimace, so that was short lived.

I’m currently in the hunt for something new and kind of nervous about being untreated.

Diagnosed with ulcerative colitis in 2008

8 thoughts on “Untreated UC kind of Freaks Me Out”