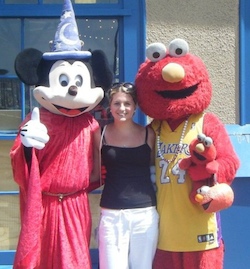 Me hanging out with some friends!

I love spending every waking minute with my daughter, she’s growing up so quick, every day she is doing something different. We also have a Doberman cross dog, who we rescued from Greece, she is lovely and very good with our daughter. Best friends for life I think :):)

I was finally diagnosed in December 2008 when my dad rushed me to hospital, called 999. Spent 4 years being told it was IBS, until 2 weeks before being admitted I spent 2 weeks on the sofa with severe diarrhea (blood and mucus/water) and vomiting, couldn’t keep anything down, lost 2 stone. Stupid GP said it was gastro flu…

Turned out to be serious (extensive UC) had scans/cameras/biopsies ( consultant said looked like world war 3 inside) 10 bags of saline later was so dehydrated. Spent a week in hospital.
My dad was so scared for me, seeing me being blue lighted to hospital, his dad was in another hospital on life support with legionnaires disease, so it was a terrifying time for him.

Finally over the next 2 years got stabilized on drugs

Feb 2010 another severe flare spent the 4 weeks in hospital, started IV ciclosporin along with my others. My partner was fantastic he visited me everyday bless him, he made hospital bearable :)

Due to see consultant in 2 weeks….. Fingers crossed, hoping for a scan to see what’s going on up there haven’t had one since my last admission in 2010…

So camera test up the butt 1st one was terrified, but gave me sedation ( best thing ever) now I request it every time, and I get it, and I honestly don’t care what they do, that stuff is brilliant :):)

I would love to say colitis doesn’t ruin my life, but it does, can not wait to get pregnant again, will hopefully go into remission for approx 2 years :):) ******* fingers crossed*******

Sometimes it works…. I think my body just gets used to the drugs, then it stops working….