UC and Me – Currently I am Symptom Free and Taking Lialda 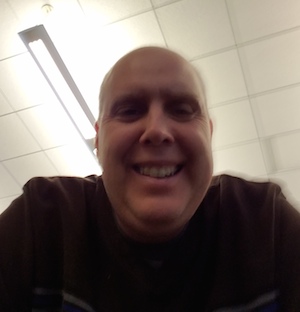 Chris, the 30 year Guitarist and UC’er!

I am a 50 year old male who was recently diagnosed ( November 2016) with UC. 2016 was filled with lots of twists and turns that finally landed me in the hospital and untimely with a confirmed diagnosis of UC.

I love music, I collect CD’s, albums and MP3’s and I have been playing guitar for 30+ years.

Currently I am symptom free. I do have the occasional bloating and urgent need to find a restroom. However since early December 2016 after I spent 3 days in the hospital and got on steroids and lialda I have been able to get this under control. I also adjusted my diet slightly.

It all started in December of 2015. I was experiencing very bad stomach pain and diarrhea (no blood or mucus). After seeing my family physician and scheduling Colonoscopy # 1 I was given a clean bill of health. Nothing detected except some minor inflammation and diverticula. Not much happened in the first few months of 2016, that is until may rolled around and we were preparing for my sons high school graduation. It hit me like a ton of bricks and I had no idea what was going on. I had pain, bloody diarrhea and weight loss. ( no matter how much I ate). So again I went back to my doctor and at first he thought it might be my diverticula acting up. I had a cat scan and the results scared me, the CT technician noted there was a mass in my abdomen. So in order to confirm what was going on I had colonoscopy # 2. However because I had to wait 3 weeks to get in to have it done by the time I go there everything had cleared up on its own. Which still baffles my Doctor.

I went 3 months and no issues everything returned to normal. Until I went on a trip with my wife to Charleston for our 22nd anniversary and got really ill again. Everything was back. This time with a vengeance. It got so bad I became anemic and was admitted to the hospital. I also had lost 8 pounds and was weak. It was while I was in the hospital I had colonoscopy # 3, which was the charm as the say. They diagnosed me with UC and prescribed Prednisone to calm it down. Prednisone worked for about a week then I was back to feeling blah again. So my Gastro Doc put me on Medrol (methylprednisolone) and Lialda. Which worked for me. My GI doc said the way my case presented was unique and he said that usually prednisone does the trick, for me it did not.

I am happy to report…

I feel better and I have put the weight back on. I am just trying to learn how to live with this. I have been adjusting my diet to incorporate heather foods and less processed food. So far so good and we shall see.

Prednisone- did not help
Medrol (methylprednisolone) did help. I took it for almost two months
Lialda – is what i am currently on and it has been working so far.

Lots of Lialda Information on iHaveUC to review:

I am a father of two and an Information Technology professional and I currently live in North Carolina.