UC Made Me Realise I Took My Health for Granted 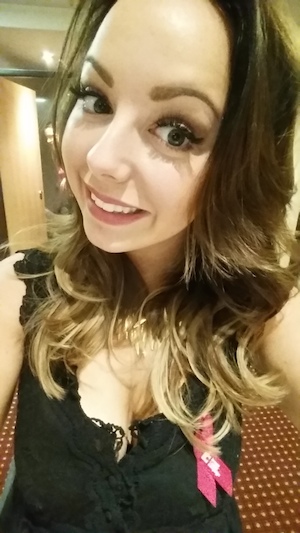 Hi my name is Jazmin, I’m 23 and I live on the wirral in England. My diagnosis is very new to me. I am open to any advice you have for me it would appreciated.

I love running and rock climbing and also have a passion for cooking and food in general.. I work as a nursing assistant in the hospital on a very busy assessment ward. I absolutely love it, one day I hope to become a nurse.

I was diagnosed with UC in October 2014. My symptoms started in June 2014 following a gastric bug. I started bleeding and just thought it was caused by the bug. After a week it stopped so I ignored it. But then it started again it freaked me out but there was no pain so I just thought it would pass. I noticed my immune was poor and I was catching everything. I got tosiltis so I went to my GP. While I was there I mentioned I was bleeding and she asked if she could have a look. I thought she ment my throat. Boy did I get a shock when she told me to pull my pants Down. She told me it was post viral and sent me on my way.

But the symptoms got gradually worse, and I started getting diarrhoea on/off and mucus. Then come the pain before and after toilet motions. And finally incontinence, I has to leave patients in work to go the loo. I had accidents in bed with my boyfriend at the time. Sex was out of the question.

I began to do my own research and asked the doctors/surgeons questions in work. I come to the conclusion that I had UC.

I went back to my GP, she told me I wasn’t in enough pain to have UC. I was angry and upset and told her this was changing my life. She eventually referred me to the surgeon. After 4 night shifts and no sleep I thought I was going to talk about having a camera. Little did I know that he would use a rigid one there and then. Oww is all I can say! The worst thing about the whole experience was he wiped my bum I felt humiliated.

However he was sympathetic and told me he would fix me and send me for an emergency sigmoidoscopy. Which was uncomfortable but wasn’t as trumatic as I thought it was going to be. They only managed to get 30cm in which was enough for a diagnosis. But I was told that I would have to come back for another at a later date to see how much of the colon is affected. When It was over they couldn’t get me out quick enough. They litreally chucked a piece of paper with my diagnosis of UC on it and a prescription for steroids, mesalazine pentasa and calcium, with no explanation.

I was overwhelmed, what was I supposed to tell work. I didn’t understand it. At the time I didn’t know I would be on medication for the rest of my life. Nor did I know the camera would aggregate my condition.

A week later I was sent home from work and signed off for 2 months. 2 days after this my boyfriend of 3 years broke up with me. By text! ” I’m to selfish to support you, you deserve someone better”. And he was right I do, if someone can’t be there for you when you need it most then there not worth it.

People started treating me differently. And I got fed up of people asking me if I was ok. I felt guilty getting upset as in my job people are dying everyday. The way I see it is I have a condition that can be treated.
The symptoms got worst and I had horrible side affects off the steroids. I couldn’t sleep for nearly 2 months, I had the shakes permanently. My bones hurt, I had to put a pillow in-between my knees in bed just so I could ease the pain.

I was angry! Why has no one talked to me or explained anything? It was the end of Feb 2015 before I seen anyone, by this point I had researched the basics. Even though the diarrhea, blood and mucus had stopped. I was fed up I hated being off work, I missed running, and walking was an effort. I was so fatigue, when would I feel normal? The answer is some people don’t, it just becomes the new norm.

I deal with my Ulcerative Colitis by making jokes about it, and updating my friends on my latest poo stories. Me and my flat mate dance around the flat celebrating my first formed stool lol.

I think the worst part of UC is the not knowing! When will the next flare up be? Will it be worse than the last? What are the signs?

I’m due to have a colonoscopy around may, I’ve been told this will cause a flare up. I’m worried about taking more time off work.

However I want people to know that having UC had also had a POSITIVE! effect on my life. It has made me realise that I took my health for granted.

I have changed my diet for the better. And although I ran before, it was as and when I could be bothered. Know that I can run again I run 5k 4 times a week without fail. I also started this thing called 100 days of happiness. It helps me keep a positive out look on life. I would recommend this to anyone who is struggling

I love running and rock climbing and also have a passion for cooking and food in general.. I work as a nursing assistant in the hospital on a very busy assessment ward. I absolutely love it, one day I hope to become a nurse.