Two Weeks After Finishing Prednisolne, I Start to Flare Again 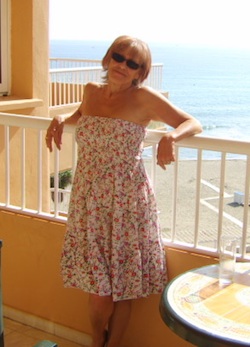 I am 62 years old and now retired from a stressful job as PA to the Head of Housing for a London Council. I have been divorced for 30 years and have two wonderful children and three adorable grandchildren. I have been with my lovely partner for 18 years now.

I am into DIY – my partner and I made a good team when we purchased and renovated our house in Essex. He did all the major things like electrics, plumbing etc and I did all the decorating. I love spending time with my family who would describe me as dizzy, nutty and loving. I enjoy socialising, walking, gardening and sewing.

I am trying to get over a major flare I had over Christmas and the New Year, with the aid of Prednisolne.

I was diagnosed with ulcerative colitis in November 1999 and have taken Sulfalazine 2 x 500 mg daily. I had a few slight problems over the years, but nothing major. My last colonoscopy was in May 2012 as the result was Pan colitis – in remission. However in December 2012 I started to flare, but unfortunately because I had not had any problems for years and had forgotten the initial symptoms, just thought I had a diarrhea bug, which was going on a bit too long!

My GP prescribed me Prednisolne 1 x 5m for one week, but unfortunately that was not enough for long enough and it spiraled into a major flare just over Christmas.I had been back to my GP thee times in one week just before Christmas and was told to continue taking the meds and I would feel better. I had to attend A&E Boxing Day night where I was kept in for 12 days being released with Prednisolne 8 x 5m per day on a gradually reducing course.

The reason for my flare up was identified by my consultant as I had stopped smoking on the insistence of my GP as she informed me after a chest x-ray that I had COPD,which freaked me out. However, after a lung function test it turned out I had had a chest infection, nothing more. The stress I experienced had caused a major flare up.

The problem now is that the flare up was so severe, two weeks after finishing a reducing course of Prednisolne, I start to flare again. I have had four courses so far this year and my consultant now wants to put me on an immuno suppresent Azathioprine. I am very anxious about this, as from the information I have been reading on the internet, the side effects are horrendous. Is anyone taking this and how has it been for you?

My family and partner are wonderful and really supportive, but at the moment I feel like I will never be myself again. Normally I am buzzing around doing this and that, but now I am generally tired, emotional and have very little interest in anything.

I took Sulfalazine 2 x 500 mgs daily for the past 12 years. The only problem I had with it was the white blood cells, but this was generally sorted with iron.

I have had Prednisolone when flaring and think this is wonderful. Made me feel great and dealt with the bleeding and BMs. However, the side effects are not at all good.

I am 62 years old and now retired from a stressful job as PA to the Head of Housing for a London Council. I have been divorced for 30 years and have two wonderful children and three adorable grandchildren. I have been with my lovely partner for 18 years now.

20 thoughts on “Two Weeks After Finishing Prednisolne, I Start to Flare Again”

previousFresh Out Of The Hospital, No Strength
nextWhat About Putting on Weight Instead of Losing?