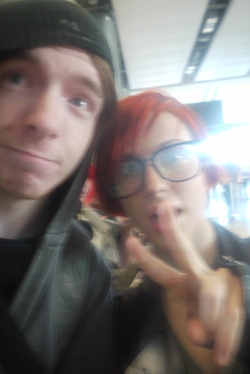 here’s a picture of me and Hayley Williams to attach, since I put the quote in I thought it’d be fitting!

I’m 19, from Dublin, Ireland.
I was diagnosed with Severe Pancolitis on 6th September 2011 after struggling with symptoms from late 2010 – Early 2011.
I was very sick by the time of medical intervention, requiring a 9 day hospitalization with blood transfusions.

For the last 2 years I’ve been pretty well, and been in almost complete remission since March 2012.

I’m interested in Medicine and would love to be a doctor, although my illness caused me to drop out of school at 16.
I’m also a huge music fan!

It’s been a while since my last post here, so I’d like to start by saying Hi to any of the old users I used to communicate with on this site, and I hope you’re well

As well, I’d like to thank Adam for keeping this great site running. I remember the week after my diagnosis, this was the first site I found, and it made me feel far less scared about the journey I was about to embark on.

Life right now with UC is the best it’s been in the 3-or-so years I’ve been diagnosed with Ulcerative Colitis!
There is life after your diagnosis, which is something I really didn’t think i’d have.

When I was at my sickest, they thought I was going to die, and it dawned on me the amount of things I’d never done, I was only 16/17, so I thought I had plenty of time to do them all, but life isn’t a set amount of years that you get, you have to make the most of it while you have it, and that’s exactly what I’ve been doing!

I’ve a very active social life now, with none of the same friends I used to have, but much better ones! my infusions fit around my life, if I want to go do something, they postpone my infusion a day or 2 so it works out pretty well!

I’m also planning my first trip outside of Ireland, to Orlando and Miami,FL and The Bahamas!

The thing for anyone newly diagnosed to know is, the disease might have taken your life for a few months, maybe even years before your diagnosis, that’s gone, you’re going to get your life back.

you’ll find a medication that works for you, and if not, there’s always the surgical option.
Remicade has been a true miracle for me, and in the year and a half I’ve been using it, I’ve never had any serious problems apart from some bad throat and ear infections.

I never thought in a million years that in a few years time, I’d be this well and happy again.

to anyone who’s not currently feeling as chipper as I am, I’d just like to leave a message that I got from Hayley Williams (the singer of Paramore) when I was at one of my sickest points

“Stay as strong as you can, and when you can’t, let others be strong for you.”

I’m From Dublin, Ireland
Back in November 2010, I noticed some changes to my bowel habits.
Before this, my bowel motions were pretty much once a day, normal motions, but on November 5th I started to get looser motions, which became more frequent, at the start I thought this was absolutely nothing to worry about, and within 2 weeks it sort of returned to normal.

11 thoughts on “There’s Life After Diagnosis!”

previousNew To This – First Colonoscopy Coming Up, Should I Worry?
nextUC Doesn’t Define Me – It’s a Small Part of Who I Am