The Mental Battle of Ulcerative Colitis 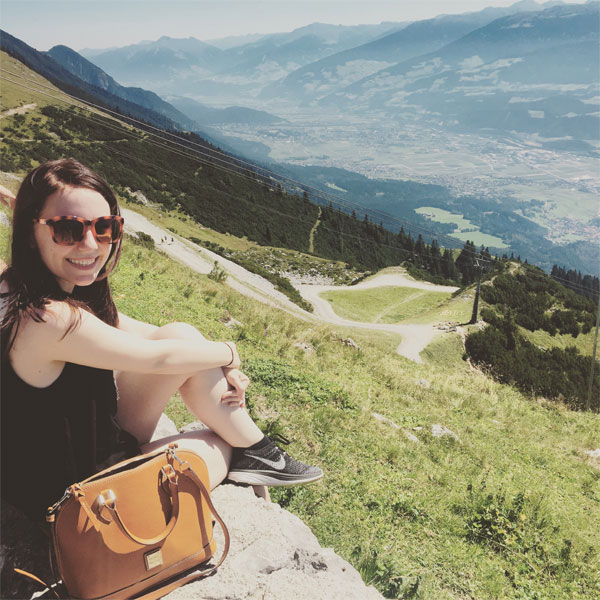 Here’s Kayla high up on the mountaintop!!!

My name is Kayla, and I’m 25 from the Bay Area, CA. I’ve had UC for about 11 years now, and what a journey it has been – much of the struggle just against myself! I’ve lurked here quite a few times over the years, but felt the urge to finally introduce myself today. The physical side of my UC is still a work in progress, though I’m at a much more optimistic place these days, but I also think the mental side isn’t talked about enough on here. I’ve definitely developed some very specific anxieties due to my UC because of my symptoms during flares, but I’ve also gone way out of my comfort zone in spite of my UC – because I refuse to let it stop me from experiencing life the way I want to.

Some more about Kayla:

I’m definitely a homebody, and spend much of my non-working time doing all I can to avoid doing much else besides reading, listening to music, and messing around on the internet. On the other hand, travel is the great love of my life thus far, and for as much Bathroom Anxiety as my UC has given me, it has also made me very good at compartmentalizing my suffering so that I can enjoy the moment!

I’ve managed to spend a cumulative 5 months traveling to 12 countries over the past 5 years, and even while in a bad flare it was always an amazing experience. Recently, there was a thread on Reddit asking about “People who have sh*t themselves during their adult life, what happened?”, and most of the stories made me laugh – because these people just don’t know what we UCers go through, and how normal it becomes to get over an incident like that 5 minutes later! On one of my trips, the urgency pushed me over the edge 20ft. from a train station bathroom – so I threw my underwear away, and moved on with my day!

In hindsight, I think one of the most important lessons traveling with UC has given me is to just do it anyways, because when I look back on those memories I honestly rarely think about moments like that train station incident. Instead, I remember drinking hot wine at a hilltop café in Prague, or the amazing views on a bus trip through Slovakia (which, to be honest though, was a 4 hour bus trip in which I didn’t even have a sip of water for fear of waking up my digestive system, because this bus definitely didn’t have a bathroom, and there were no stops…but still!) – and I’ll always be thankful that I didn’t let my fear prevent me from living.

My current hurdles are not necessarily direct UC symptoms, but problems that I have to overcome because of my UC. The main one is my anxiety stemming from the urgency during flares. Even now, I won’t go through a drive-thru window (not Fast Food, don’t worry – just when I pick up coffee/tea) if there are other cars in front of me, because if I do I immediately feel trapped. Similarly, its extremely hard for me to be a passenger in anyone else’s car (unless it’s family, or one of my close friends) for the same reason. I think the most difficult part of this anxiety is that it’s not baseless, so I can’t really tell myself “It’s all in your head” – because when I’ve been driving before, I’ve had to break some traffic laws to get to a gas station bathroom in a flash, and I can’t do that if I’m in a random acquaintances car, or stuck between two cars in a drive-thru line with no escape.

For a long time, I would just try to force myself into situation that I knew would make me anxious, as some kind of prescribed exposure therapy. At the beginning of last year, I signed up to be a driver for a service that was basically “Uber for Kids”, specifically to try and overcome my discomfort with being “trapped” in a situation (because I couldn’t pull over to a gas station with some stranger’s kid in my car), but it really didn’t help. Now, I’ve pretty much decided that putting that extra stress and adrenaline into my system is just not worth it, and I just try to not put myself into those situations for no good reason!

I had my first flare in my sophomore year of High School, and I (and my doctors) had NO idea what was going on. I had to leave school for a couple months, was put on antibiotics and all manner of random drugs before I finally had my first colonoscopy about 5 months in. Was diagnosed with Ulcerative Colitis straight after that, and put on my first round of prednisone (and sulfasalazine). It was just the beginning, because I was an idiot teenager who really didn’t understand the significance of the diagnosis at all.

For years I would go on and off of my meds willy-nilly, have flares multiple times a year (usually I would just try to ignore it, start my sulfasalazine again, and wait for it to end – but a handful times went back on prednisone), and didn’t ever do anything to change my diet at all. A few years ago, after going on my meds yet again, I had some kind of bad reaction to my sulfasalazine, and decided I wanted to switch to mesalamine (Apriso) – and decided that I was never going to stop taking my daily meds again. I would still get month-long flares a few times a year, and I still did not change my diet, but I’d convinced myself that I was handling it well enough.

Then in the Fall of 2015, I was in bad shape. Had been in a flare for a couple months, and it wasn’t going away this time. I was having the full gambit: 10-15 times a day with urgency, extreme nausea from gas pressure every single time I used the restroom, blood, mucus, etc. – and all while I was trying to work a high-pressure job with it’s own stresses. I had a colonoscopy in October 2015, and was put on Prednisone again straight after. Except this time it didn’t work.

I was on 40mg/day for nearly a month with zero improvement, so we upped it to 60mg/day, which I stayed on for almost two months before I started tapering down. I’d never had symptoms during my previous Prednisone rounds before, but this time it was a LOT. Bad acne all over my forehead, and major insomnia – I would sleep for a few hours at most, and then be wide awake at 3AM. And a couple months later, after I had finished tapering off, I was losing chunks of hair every day – which sounds superficial until you go through it, and it turned out to be one of the few UC-related experiences that made me break down crying in the shower.

Still in the midst of a never-ending flare, but done with the Prednisone, I changed insurances and had to go to a new doctor, who put me on 6-MP, which was the worst mistake so far. I couldn’t work anymore, it didn’t help my symptoms, and it literally dropped both my white and red blood-cell levels to nearly zero. It was the weakest I’ve ever felt, and I will never be happier than the day that my grandmother (who I had to move in with after I couldn’t take care of myself anymore) threw those pills away.

Six months later, and I feel like a new person! I still have about 1-2BMs a day, sometimes 3 if I have coffee (which I’m still trying to quit), and some discomfort every now and then, but I’m miles above where I was. I’m sticking with my Apriso still, but am additionally taking fish oil, Vitamin-D, Iron (as I became anemic again last year), and a liquid probiotic (20 billion culture) after every meal. I want to switch to the VSL-3 probiotic, as I’ve heard great things about it, but it’s so expensive!

As for my diet, I’ve finally turned that around and cut out 95% of things that I’m sure were hurting me greatly: no more soda, no more Venti Frappaccinos, no more fast food, no more sushi (which I miss the most, but what can you do). On top of that, I’ve made sure to stop eating things that, though they may be healthy for normal people, really mess me up like: tomatoes (which I used to eat at least once a day, in one form or another), spinach, and most raw veggies/nuts. I eat a LOT of white rice, cooked carrots/sweet potato/brussel sprouts/cauliflower, usually lamb or beef, and sourdough bread, eggs, and avocado every day. I also love sauerkraut, and recently found kimchi at my local grocery store and have been mixing that in with my rice – yummy!

Mercaptopurine was a horrifying experience for me personally, and I’m certainly never making that mistake again! As for prednisone, I honestly don’t think I can ever take it again – and not because of the side-effects, but because it doesn’t work anymore. I know it’s possible to build up a resistance, and my body certainly must have done that if 60mg/day was barely making an impact. This last time it was so hard on my body, so much so that my skin and hair is still recovering a year later, and I don’t think it’s worth it anymore to go on.

My name is Kayla, and I’m 25 from the Bay Area in California. I’ve had Ulcerative Colitis for about 11 years now, and what a journey it has been

9 thoughts on “The Mental Battle of Ulcerative Colitis”