This is a brief overview of what happened to me with UC. There’s a lot that I left out because I still haven’t dealt with most of it emotionally. Everything happened so fast. I will say this, though: Writing this little piece helped me a lot. Maybe it will encourage others to write their own bits and pieces, or even their entire stories, and put to rest some of the emotional trauma that comes along with having this disease.

I first realized something was wrong with me in early February of 2009. Until that point, I’d had bouts with diarrhea for most of my whole life, but nothing serious. If anything, I felt most of my stomach issues were stress-related (I’m not the most laid-back individual) or caused by something I’d eaten. So when I started seeing blood in my stool in February, I chalked it up to a recent addition to my diet (ground flaxseed) and the stress of

schoolwork. I eliminated the flaxseed from my diet and figured it would work its way out of my system after a few weeks, at most. However, two weeks passed and then four, but I was still bleeding. I started noticing my energy levels decreasing and my stomach seemed to be upset much more often. It also made ridiculously loud grumbling noises that were extremely embarrassing in class. I swear students next to me must have wondered if I was going to crap myself at any moment. Still, I kept up my normal lifestyle: working part-time, going to school, and training for a bodybuilding competition that I hoped to compete in later that year.

Three months passed before I finally told my husband and parents that I’d been bleeding. By this point, I was having eight to ten bowel movements a day, most of them “unproductive” and consisting mostly of mucous and blood. Of course, they insisted that I immediately go to a doctor. After doing a quick stool sample and rectal exam (during which the doctor talked cheerfully about the weather and the office’s recent renovations), it was confirmed: “Well, it appears you’re right. There’s blood in there!” Based on her enthusiasm, I felt like I’d won a contest. “Blood? Awesome! What’d I win, Doc?”

Within two days of this initial exam, I was laying on a GI doctor’s examination table with another finger up my butt. My rear got more action that week (and in the coming months) than it’d gotten in 28 years. Unfortunately, this was just the beginning. A colonoscopy later that week revealed that I had mild Ulcerative Colitis. I was, on some level, relieved. Having a diagnosis was a good thing in my opinion. It meant we knew what we were dealing with and how to treat it. Little did I know that in just three months, my entire life would deteriorate and I’d wind up spending the last months of the year in a hospital, hoping some days that I wouldn’t wake up because the pain was just too much to handle.

After my diagnosis, I started taking mesalamine. Within a week I felt better – no more blood, no mucous, reduced visits to the bathroom. I felt pretty good. But almost one month after I’d been on this medication, all of my symptoms came back and were much worse. I had another colonoscopy and 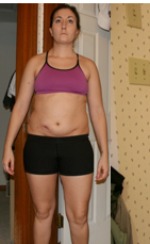 this time it appeared I had moderate UC. My doctor prescribed the corticosteroid Prednisone – a bodybuilder’s worst nightmare. I resisted the drug’s side effects successfully at first. I drank more water, cut down my calories, and started working out more. After approximately two weeks, though, the drug caught up with me and it seemed I gained ten pounds almost overnight. To add insult to injury, none of my UC symptoms had improved. In fact, they were, yet again, getting worse. From June until late August, my doctor and I experimented with numerous drugs. I had three or four colonoscopies

and two endoscopies. My body refused to respond to any treatment and I was losing more energy and feeling worse every day. It became clear that I would be unable to compete any time that year.

During the first week of August, I went with my husband and his family to the beach. I was in so much pain that I spent most of that week drunk. I didn’t know what else to do and I needed relief. Anytime people saw me that week, I had either a bottle of whiskey in my hand or a glass of it. When we got home, my first semester of graduate school started. I made it through one week of class before I was admitted to the hospital for severe UC. While there, the doctors gave me Remicade and 6-MP and kept me on prednisone. Lucky for me, they also gave me pain medication. This was the first real pain relief I’d had all year. After a week, I was actually constipated (this may have been a side effect of the narcotics). The doctors felt that because I was no longer puking and crapping my brains out, that I was in remission. Despite my protests, they sent me home.

The next two days were horrible. I used the bathroom and threw up so much that I became unable to walk on my own. I became severely dehydrated and started having cold sweats and I couldn’t stop shaking. My mother took me back to my GI doctor, the one who’d originally diagnosed me in May. He took one look at me and readmitted me to the hospital immediately. Within one week it was discovered that my colon was expanding, and fairly rapidly. I was transported to a different hospital, the same one I’d been in only a week before. While the doctors spent the next couple of weeks trying to get my situation under control, I became convinced that I’d reached the end of my life. I told my husband over the phone one evening when it hit me that I might not walk out of the hospital again that, “this is it for me. I always knew I’d be dead before I turned 30.”

Not too many days later (my sense of time is hazy due to the medications I was taking) I was heading into surgery to have my entire colon removed before it perforated. I remember telling my parents and my husband that I loved them. I hoped my husband would find someone one day that he could be happy with. I had no expectations of leaving that surgery alive. Zero. And I was okay with that. I didn’t want to hurt anymore.

So imagine my surprise when I woke up seven or eight hours later, in an incredible, indescribable amount of pain, but ALIVE, though not totally wrong about feeling like I wouldn’t make it out of the surgery. Apparently, prior to dosing me with anesthesia, the doctors didn’t hook me up to the appropriate machinery to make sure I continued breathing. Sometime after the anesthesia was in my system, I stopped breathing. Obviously, I made it out okay, but having my physicians tell me that the end had, indeed, been near, provoked an emotion that I think I still haven’t really dealt with fully.

It’s been a year and three months since that first surgery. Since then, a lot has happened. I’ve had an ileostomy reversal. I gained 45 pounds from the medications and from being stuck in bed, but I’ve lost 35 of it so far. I had to take one year of medical leave from school. I restarted this past fall and love it. I also had to quit my job for six months. I tried going back for a few months in 2010, but I became so exhausted that I had to quit altogether. Now I’m focused totally on my health and school. And for my thesis, I’m trying to give back to the UC community, which has helped me immensely: my topic will focus on the social, cultural, and medical history of Ulcerative Colitis.

I think that hardest part of dealing with UC, for me, was feeling like my body betrayed me. I’m still coming to terms with this. Every day I look in the mirror and expect to see my old self, to see the body I had before I got sick. But it’s just not there. Until it comes back, I’m just happy for days that I can look at myself and think, “Sure, I’ve got some scars and a little pooch on my belly that may never go away, and I don’t have the muscle definition I used to, but you know what? I’m alive, and I know what it’s like to not want to be. So I’m going to enjoy every damn moment I have left!”

I’m a 30-year-old grad student living in NC with my husband and our five cats, one of which has UC as well!