Telling An Old Friend About Your UC 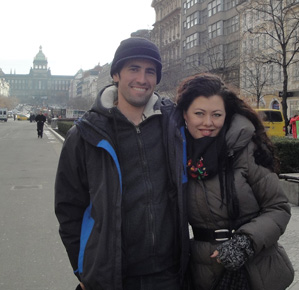 How are you all doing?  I hope the holiday season is going well for you, and you’re all excited for a new year that’s going to be here in no time.

When was the last time you met up with someone, let’s say an old friend for example.  Someone who you haven’t seen since your UC diagnosis perhaps.  Did you talk about your UC?  Did you hide it completely?  That’s what this story is all about.  These meetups happen, and we all have choices to make.

About a week ago, my wife and I traveled to her country of the Czech Republic, and we’ll be here for a few more weeks until we train it over to Hugary and Croatia and then a few more stops.  I had a pretty interesting day so far, and I wanted to share some of it with you.

For pretty much everyone with UC, there comes a time where you meet up with an old friend for the first time in a long time.  And, if you haven’t seen and talked with that person since your diagnosis, then you for sure have a choice to make.  Do you tell them about your UC or not?

As you might have guessed it by the title here, I met up with my friend Ana who lives here in Prague.  She’s originally from Russia, but has been here for several years.  We worked together five years ago when I was living in Czech, and we hung out quite a bit after work with some other friends.  You know what I mean, getting lunches, hitting the local bar scene, chatting about life etc…  When I moved back to the states, we’ve really only connected on facebook and that’s about it.  Coincidentally, Ana has a sister named Elena, who visited the US and stayed with my wife and I just 3 days before my diagnosis back in early October 2008.  It was an awful time for me since my “unknown symptoms” were super severe.   I was bummed that I was such a boring (bathroom living) host for those two days she slept on our floor (don’t worry, she had a sleeping bag).  I wanted to take her out around San Francisco, have some fun, but that just wasn’t possible.  I was too sick and too weak.  And sure enough, I had my colonoscopy a few days after Elena left and the rest is history.

But today Ana and I met up.  We decided to meet in the center of Prague, I’m sure some of you have been there.  Mustek, the main transfer hub of two metro lines was the spot.  Right under the huge Christmas tree was the exact place.  I was super excited to see her again.  We had some great times together back in the day.  And although lots has changed since those pre-UC days when we were together last, most things are the same. 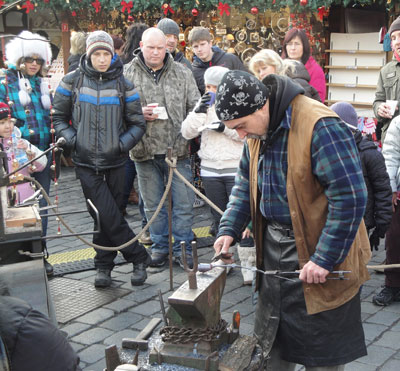 Once we got tot he old town square “OTS”. There are a buttload of booths and people like this dude doing some oldschool blacksmithing. I could watch him all day.

I’m not sure exactly, but I bet that it wasn’t 5 minutes since we met that I gave her the whole deal on my colitis.  And why not, it is a part of my life now.  There’s no reason to avoid it.  And guess what, she was interested in the whole thing.  The conversation started off with me telling her that I was diagnosed with UC pretty much right after her sister stayed with Michaela and I back in the end of September 2008.  Like I usually ask most people, I asked her if she had ever heard of “Ulcerative Colitis” before.   And like most people, she said “NO”.  Then I did the usual and asked if she had heard of “Crohn’s Disease”.  Another “No” from Ana.  So I told her that UC was considered an “auto-immune” disease which basically means the body is attacking itself and not stopping, similar to arthritis and psoriasis and a whole ton of other “auto-immune” diseases.  She started coming around now.  And then I went into the whole idea of how the colon, actually I think I explained that as the pipe that drops the poop out of your butt, can start to bleed and your body starts to get weak, cramping, and often horrible pains.

Alright, now with these visuals, she started to get that we weren’t talking about some bad stomach aches, and this was a pretty nasty sounding deal.  But hey, that is was UC looks and feels like sometimes, and there’s no reason to hide any of this.  No reason that just UC’ers know the whats-what with UC symptoms.

Anyways, I went on for a few more minutes about how my early days went right after my diagnosis.  How I was taking all sorts of medications.  How I lost a crapload of weight.  And how I eventually started doubting getting out of the flare up without getting surgery.  And then, while we were walking around, and looking for a place to get some food, I started telling her about the SCD diet that I follow (most of the time, been a little hard lately with all the awesome Czech Christmas cookies going around out here, ain’t gonna lie folks).  I told her how I have been off the alcohol for 3 and a half years now.  That was a tuff one for her to grasp since we were always drinking pretty hard before.  But she got it.  I told her I haven’t had bread or pizza in years now (wait a minute, I did have a tiny piece of Czech bomb-ass dark bread yesterday, but just a little).  I boiled it down to my diet is much like the olden day caveman foods. 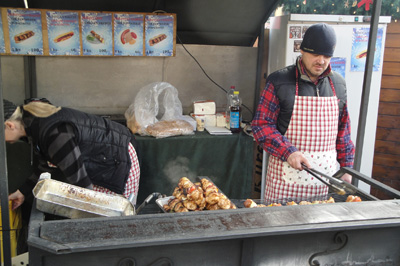 I ended up getting a BOMB chicken skewer for 100 Koruns (about 5 bucks) from this guy’s stall in the old town square. I told him to keep the bread bun that it usually comes with, and he definitely gave me the “what, no bread???” look:)) Man, super tasty though. Chicken, onions, some peppers and some super tasty salt spices.

Maybe the whole conversation on my UC went on for 10 minutes, I wasn’t timing it, but it most definitely wasn’t too much of our 3 hour walk through Prague, over bridges, and back to the Old Town Square for some street food from the different vendors that are out slinging their goodies.  And I’m happy as hell she knows what’s up with my UC now.  It’s that simple.

Everyone is going to handle this meetup situation with old friends differently to some degree, and there’s no right or wrong way to do it.  But I for sure am a big believer that your true friends most definitely want to know the deep dark details of your lives, and as a UC’er of the world, all of us have nothing to hide from our friends.

You know, one of my ongoing dreams is that someone from this website is going to write to me and say, “Hey Adam, I told my best friend about my UC, and my symptoms, and guess what… He/she told me they were living with and hiding those symptoms right now.  And, after we talked, my friend went to the doctor and finally got diagnosed with UC, and is treating it and finally feeling better.”

I hope Ana never tells me that, but if for some crazy reason our conversation today had a lightbulb go off in her head that any bleeding, cramping, and whatever else she might be hiding is more than just an ongoing bad stomach ache or hemorrhoids, well, that in the strangest way would make me feel good, and make conversations about UC worth even more.  It is our job as UC’ers to educate others about the condition.  Too many people have no clue what the words “Ulcerative Colitis” mean.

Have a safe and happy new year!

AND if YOU have any ideas on how to handle these meetup situations, please let them be known below.  There’s got to be millions of ways to go about it.

-So earlier today, my wife and went over to some old friends who happen to live down the street from where we are in Prague 7.  Anyways, Brian and his wife I guess throw an annual cheese and wine party on January 1st.  So we rolled on down to see them and their kids.

We were the first to arrive so after a few minutes of catch up, Brian who wrote a book called: The Seeds of Cain: (A Novel),

offered me some beer or wine etc…  And I told him I actually don’t drink anymore.  He’s been sipping the Czech beer for nearly ten years now and is full on Irishman so his drinking goes way back, and when we used to hang out it was always part of the equation.

Anyways, I told him right away I have this digestive disease called ulcerative colitis, and I stopped drinking because of it over three years ago.  Coincidentally, he was like, “Holy crap, my brother was diagnosed with that back when he was about 20 years old!”.  So I was the lone ranger sipping water, but it as pretty good tap water none the less.

What are the chances?  Any actuaries out there with that answer???

17 thoughts on “Telling An Old Friend About Your UC”

previousSo No Colon or a Chance of Cancer or Death? umm…
nextZyflamend – Lets Call it “My Liquid Gold”