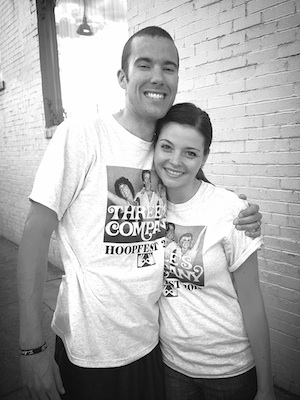 Kyle and his wife

Hope you all are enjoying the sunshine and HOT! The wife and I just spent 10 days over on the east coast touring the cities of Philadelphia and New York and had ourselves a blasty blast of a time! Owning up the eateries SCD style. Things worked out pretty well, had to do a handful of pretty bland meals but we found several spots that made things work for us : ) There is a great spot in NY called “Hu-Kitchen” that is a “Paleo” spot but the SCD and Paleo are pretty close with a handful of differences but this place was great! They cooked everything with Virgin Olive Oil and coconut oil and it was spiced up with different herbs and spices to make the taste delicious! Hard Rock Cafe was another spot that was very accommodating and a burger spot in Philly called “Burger-Fi” was a quick spot to grab a bite SCD style, just make sure you get it “Green-Style” with no “Fi-Sauce,” I encouraged them to bring it over to the west coast!

My current state with IBD is kind of a state of confusion, I am still rockin’ out things SCD style. I had a sig-flex at the beginning of June and to quote my GI he said, “Kyle if I didn’t know you I would have no idea you had Crohns.” He didn’t notice any inflamed areas or any strictures or scar tissue issues. Such an encouragement to my wife and to keep at the SCD, only problem was I was hoping that I might be able to get some answers from the flex as far as why I am still experiencing constant cramps in my gut, primarily on the left side. Still wondering, why the cramps, I asked my GI if there was any other way to find out answers, he sent me to get a CT scan of the upper abdomen and once again I got another excited call from my GI celebrating at how great everything looked in my gut. I was once again excited, but still confused as far as why I am still experiencing stomach pain.

My BM’s are once a day in the morning and for the most part of solid and formed, had a week or two stretch there was loose BM’s in the morning, think there might have been some illegals in the juice I had to drink for the CT scan, but were still semi-formed, No D going on. But I still have these constant cramps, some days are definitely more of a pain than others. But never curled over laying on the floor like in a flare state but honestly just a constant grip on my left side of the gut that is just there. Heat pad at night helps me get to sleep and for the most part I tend to sleep through the night. So…. What to do?

My GI has recommended a one week 20 mg of Prednisone, hoping that there may be some smoldering IBD inflammation going on that a dose of preddy might clear up. He also mentioned the idea that there could be some unsettled bacteria going on in there and talked of the possibility of a 10 day dose of an anti-biotic called tetracycling (sp?) coupled with Flagyl as we do not want to stir up the C.Diff again.

I guess I am to a point now where I just have no idea what the best step for me to take is. I am loving the fact that I am so close with getting back to a normal feeling again, but I would love to be able to kick these abdomen cramps as there really hinder me on a day to day and can wear on a guy dealing with it day after day. I am so thankful for the comments from my last post but am hoping that someone or hopefully someones might have some advice on their own experience or thoughts of what could be going on.

I am now almost a year out from my last flare and I know healing the gut takes time, but I am not getting any positive steps with the gut cramps, it is the same feeling as I had when I was first coming out of the flare last September. If you guys could drop any insight on things I would just be so thankful, feel like we are just kind of playing a guessing game and that is not where I want to be. I am so appreciative for Adam and all the IBD family members on this site. You guys all rock!