Stuck In Limbo A Long Way From Home 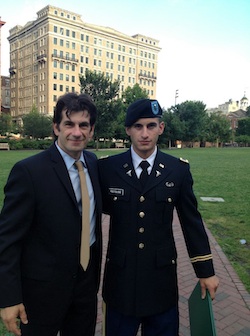 Nick with his father

I am 22 years old and just graduated from college in June 2012. I received my commission into the Army through ROTC at a medical service officer. I was diagnosed a few weeks after moving to my first station and am now in limbo trying to get better.

Blood
Urgency to go to the bathroom

I graduated college in June 2012 after 4 years of having the time of my life. I went on an Army ROTC scholarship and always excelled, especially physically. Running has always been my thing and I absolutely love it. I did my first marathon in the New Mexico desert with a 35lbs ruck sack with my best friend in college and once ran a 10 mile race in 1hr flat. Those days seem long gone for me however.

5 days after I graduated and commissioned into the Army as a 2LT I left to Fort Lewis WA to be a Cadre member for Cadets before I would leave to my basic course in San Antonio for the medical service ironically. Within two weeks of being here I had blood in my stool, and a lot of it. I was terrified to say anything and did not want to be taken out as a Cadre member since we were so busy so I trudged along. Eventually I told someone and they convinced me to get help where I saw a doctor at the hospital. They had me do suppositories 3x a day…thing is when you are living in the field and there is no bathroom around or privacy it is difficult so I couldn’t really treat myself. I had a colonoscopy and the doc determined I had colitis. I have since done prednisone numerous times which works but I flare up when I come off. The side effects are terrible also. When my time here was up I would leave to San Antonio, but now I couldn’t get medically cleared to leave because of my m eds and I couldn’t take the Physically fitness test. I went from never getting below the maximum score to not being able to run a block without feeling like I was going to go in my pants. The worst part was people thought I was just making excuses to get out of it which really was embarrassing because how could I tell them what was really wrong with me.

I eat gluten free which I have no clue if it works…it doesn’t feel like it does. I have barely had a drink since college, I don’t eat any sweets, or milk, and avoid foods that don’t digest. I take steroid enemas which helps but is not a solution. I have even tried grass seed enemas. The hardest part is my family and everyone I know live on the opposite side of the country and colitis isn’t something you want to tell your peers about. I hate going to the doctor because he is either late or talks to me for 5 minutes without offering me much hope of continuing so I am trying to find ways to get better. Staying busy seems to help because I don’t dwell on it but I have limited ways to keep distracted because it is the glaring obstacle in my way of moving on with my life. I need to get cleared to move on and if I don’t I would likely be discharged. The doc said most people are discharged but I have met people that were able to keep their symptoms under control and stayed in.

I am 22 years old and finished college in 2012. I received my commission into the Army through ROTC as a medical service officer. I was diagnosed with ulcerative colitis a few weeks after moving to my first station and am now in limbo trying to get better.

8 thoughts on “Stuck In Limbo A Long Way From Home”

previousHappy, Healthy, and a Warning About Complacency
nextIntolerant To Almost All Meds-How Can I Find Remission?