I was diagnosed in December of 2011 at the age of 33. I’ be been living with UC for 4 years, but I suspect I had it throughout my 20s and 30s and never had a diagnoses to confirm it. 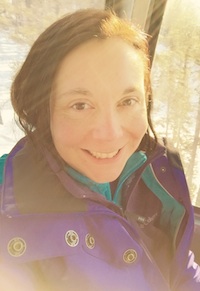 My most recent scope was a sigmoidoscopy in December 2015 due to a recent flare.

I usually flare up in the Fall months. My most recent flare was after a trip to Jamaica in Novemember 2015 where I had contracted a stomach bug. My husband did as well. He recovered in 24 hours and I ended up in a flare.

I am a 37 year old woman, working as a social worker in a local hospital. I work primarily with the elderly, homeless, addicts, and people in crisis. I enjoy my job and love helping others.

I have been married to my husband for 8 years and with him for the last 15 years. He has been by my side through every twist and turn UC has thrown at me. During my 20s and early 30s, I often coal wined of IBS symptoms, and just became a normal part of our lives, I often didn’t feel well or had stomach a upset or bowel issues. We just tried to work around it.

It wasn’t until I was diagnosed that we really had something to research and start figuring out.

We are huge animal lovers and have 2 dogs and recently lost 1 back in November. The ones we have left are geriatric and have their own issues. Sometimes in the mornings it’s a challenge to not only remember my medication and supplements but also their medications.!;)

We also love to travel, especially skiing and Las Vegas! These are yearly trips that are a must for us every year.

I am also lucky to have very supportive immediate family and I laws that have been more than acommodating for my diet restrictions at family dinners.

I am currently in remission (I hope!) after my flare this past November.

I have had some mild blood in normal bowel movements a couple of days ago while on my current meds and stepping down my prednisone. I was started in 40 mg 8 weeks ago stepping down 5mg every week until this week-currently at 25 mg. my GP suggested staying on25 mg for an extra few days before stepping down to 20mg. Unfortunately, my GI specialist is away the entire month of January, so I was unable to contact him.

I am also on Salufalk tablets and suppositories daily.

When I started my flare in November, I had urgency, blood/mucus in my stool, but never had diarrhea. The most I would go to the washroom in a day would be 4x.

My most pressing concern is weaning off of prednisone this time. I have been on presdnisone once before for a flare up in 2014 that showed a progression of my disease after my scope. I weaned off the prednisone with no problems that time.

I do worry about the time when Salufalk will no longer work for me and what the next class of medications will be.

I have a great GI Doctor who sees me in the office within days of calling with a concern. He usually books me in for a scope within the week as wel, if he can.

I have been fairly active and currently am on a ski trip. In the summer I usually run at least a few times a week and was able to run 5km at a time up until Novemeber of 2015.

My medications and disease have impacted my life in that I am mindful of what I eat and try to follow the SCD as closely has possible and keep track of food that bothers me. I know that I could do better with my diet ( can’t we all!) and I see this as a journey I will continue on for the rest of my life.

I have found this website very encouraging and appreciate all of Adam’s work in creating it. I also find the stories of other people going through the exact same thing comforting. It’s nice to be reminded when I am having a low momement and frustrated that I am not alone in this.

I have used mediation and positive self talk, as well as exercise to help keep me balanced. Mental and spiritual health is just as important as physical health for anyone, but I think especially so for those dealing with a chonic illness.

It is easy to get depressed and frustrated when I am not well, but I try to remember, that this momement will pass, tomorrow is a new day, and to focus on the positive moments.

I have tried Intestinenew in the past, and believe it helped keep me in remission for most of last year.
I have stayed away from it for now, simply because I am on so much medications and supplements at the moment.

I was diagnosed in December of 2011 at the age of 33. I’ be been living with UC for 4 years, but I suspect I had it throughout my 20s and 30s and never had a diagnoses to confirm it.