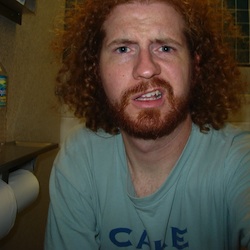 Born and raised in Southwest Florida, 33, married with no children, unless you count two cats. Dropped out of college three times (not for me). Somehow lucked into a job that usually requires a degree, and if I can help it, wait to be alone in a public bathroom so I can let loose without making others feel uncomfortable.

Honestly the only interesting thing about me is that there is nothing interesting about me. I’m fairly average, with no real aspirations or desires, at least not anymore. Not because of UC just because, “why bother?”. I’ve wanted to be many things, video game developer, comic book artist, screenwriter, cognitive researcher, ninja and/or James Bond. None of which I’ve put too much effort in actually doing, aside from telling people that’s what I want to do and reading a few books here and there. For the most part, I just play video games, watch TV with my wife, and battle a lawn that is more weeds than grass.

My friends would probably say I’m funny to the point of awkwardness, but I’m loyal and once you get to know me that I’m not so bad.

I haven’t had a solid poo in at least 12 months.
(is never having solid BM normal with UC/Crohn’s?)
At best it’s been paste-ish.

I also stay away from gassy foods like broccoli, onions, and beans.
Yogurt and probiotics also make my gut a bit crampy.

I guess I’m fortunate that I don’t really have to go to the bathroom all that much. I couldn’t imagine going 20 times a day, (wow seriously, that’s something to write home about). I mean sometimes I’ll go more than 10 times.. but it’s usually just a shart consisting of blood and mucus. My GI said that didn’t really count. (I miss farting normally.. I really do)

My eyes will tear up sometimes, I’m not sure if that’s a symptom but I did read that UC will sometimes affect other parts of the body like skin and eyes.

No skin problems, other than acne.

I have had a few “accidents” both while at work (you do not know failure in life until you crap yourself). Though I have gotten better at holding it in. The trick is clenching your ass, staying seated, and imagining it going back into the colon from the rectum. So far so good.

Officially I’ve been diagnosed for just about a year, but according to my GI I’ve had it for “some time”, whatever that means. About 2 years ago I started seeing blood on the TP, just like tiny dots, less than if you cut yourself shaving or popped a pimple. Figured I was using cheap toilet paper and it was just too rough on my delicate brown star.

A few months go by and I’m still seeing it once every week or so, until one day I see long red streaks on my stools. Must be hemorrhoids or so I thought, I went to a walk in clinic, doctor checked the oil and it tested positive for blood. He recommended a GI doc, went to him and he performed a colonoscopy. He told me it was… wait for it.. internal hemorrhoids, even canceled the follow up visit the next week. Whew.. NBD right? That’s something fairly common and nothing to worry about. Until…

About 13 months ago after a fairly routine visit to the bathroom, I took a gander at the damage that I’ve done and whether or not I need to go for a few more wipes, and the toilet paper was more or less covered in blood. You know how in movies, when they do that dolly out/zoom in effect that makes the subject still and the background move dramatically? Well, that’s what it felt like, only in my head. I just sat there for a beat, staring at my crimson reality and thought… “aaall right… now what? Because that definitely ain’t just hemorrhoids”. The next day I schedule an appointment with the recommendations of a few people on Facebook.

The doctor appointment was fairly routine; the GI didn’t seem to pay much attention to what I was saying, when I more or less recanted what I just wrote above. In between checking his phone saying “alright” and “huh-huh”, I began to regret my decision and wondered if I should trust this guy any more than the last doctor who said I had hemorrhoids. He scheduled me for another colonoscopy and away we went.

The pre-surgery regiments made me feel like I was going to die, when the first time around it was kind of a breeze (Pro Tip: make sure you eat plenty the day before, and drink plenty of water other than the cocktail of sports drink and Miralax, you’ll feel better for it…). This time we went to a hospital instead of an outpatient center like I had the first time. If there is anything you should do if you go to those insurance meetings your work has, is listen when they say, “The bigger the building the bigger the bill”. The first colonoscopy cost me around $150, the second one at the hospital cost me $3000 (the subsequent (anesthesiologist, nurse, etc) fees were about the same), I could have 20 colonoscopies at an outpatient facility for that price. The Third $200 but I changed insurance plans.

After the procedure the GI came to me with a look on his face as if he just seen a ghost. Not exactly what they saw or know, but even the nurses were treating me with the “bless your heart” look. Which was a stark contrast to the, “Monday’s suck, am-i-right?” attitude they had just a hour before. “You have severe Pancolitis, which means you have Ulcerative Colitis on all three sections of your colon and it seems you’ve had it for some time now. (Side note.. he’s from South Africa, so he says colon differently; like co-lawn instead of co-lin”). I wasn’t really sure how serious he was other than the “uh, you gonna die!” look on his face, but I haven’t seen him pull out his phone again when we I come into visit. Maybe it was just a busy day that first time.

The prednisone made me tired, kind of made me emotionally level, which apparently is the exact opposite of what’s suppose to happen? I’m not sure. I was on that for about two months until I had to go to the ER for severe pain in my abdomen. I was hoping it was just normal UC pain that I had heard about but had never really experienced at that point. The pain just got worse as the night progressed. Researching it online gave me visions of living life without a colon, I mean that’s always a possibility, but so soon? The pain so bad, I began to organize my after death, up to the point of filing a will. I figured at that point that when I was walking into the ER that at the very least, I’d be walking out without a colon. However, I was relieved when doctor in the ER told me I had pancreatitis. When I told him I rarely, if ever, drank he seemed confused and started to have that contemptuous voice they reserve for junkies and hypochondriacs. That disappeared when I told them that I was taking prednisone. Apparently, a fairly rare side-effect of prednisone is pancreatitis, coupled with the high fat content of the Taco Bell Grilled Stuffed Burrito (no baked beans please) and the sugary Ritter’s Italian Ice (Raspberry) I had for lunch the day before, set my digestive system haywire. Four days later of consent saline IV and no water or food, I was released, and we began to wean myself off the prednisone.

Flash forward to two weeks ago, and I began to feel a similar but lower pain. Did another scope, this time upper and lower, and he removed a few inflammatory polyps and in the report said that there has been improvement. The pain I had went away but now I’m starting to feel it creep up again.

written by Erik B

Born and raised in Southwest Florida, 33, married with no children, unless you count two cats. Dropped out of college three times (not for me). Somehow lucked into a job that usually requires a degree, and if I can help it, wait to be alone in a public bathroom so I can let loose without making others feel uncomfortable.