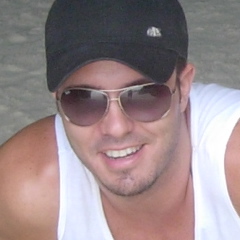 (here’s a recent picture of Eddy)

I’m originally from Brazil but I’ve been living in Florida for almost 11 years.

My colitis story started 2 years ago when after a terrible fight with my girlfriend I felt that the disease decided to take over my body. The symptoms began mild but suddenly aggravated considerably.

I really don’t think that the fight with my girlfriend was the cause, probably the disease was with me waiting silently and once the trigger was pulled my life changed completely.

I was having around ten bowel movements a day and eventually blood was seen as well. Probably like everybody else, I started with the Mesalamine family, it worked for a couple days but suddenly I started to have diarrhea and blood all over again. I tried so many doctors and they all gave me the same option: infusion (Remicade or Humira). I ended up in a hospital for a week after that…

I even had a terrible experience with a doctor who told me that the only option was surgery because this disease is a “pre-cancer” and something more hardcore should be done! I left his office literally crying thinking that I would die very soon, I’m sorry for those who have decided to solve the problem through surgery and probably it was a great option for some, but the way he spoke to me about the matter, It was unacceptable…what a butcher!!!

According to the side effects that so many people have I never wanted to give up and take Remicade, so I decided to try some alternative medicines, from teas, probiotics, weed, diet, olive oil and even a crazy chiropractic who charged hundreds of dollars for some cracks on people’s back, whatever you can possibly imagine I think I tried, none of them worked as expected. I haven’t mentioned about some accidents yet, so embarrassing and traumatizing, I had to leave the job site so many times, running to the bathroom when I was actually capable of holding it, but several times I was not. Ohh God I felt like a baby, or maybe like an old and creepy guy that could not hold my own shit, something so basic that most part of the people do not realize how important is and usually make fun of those who make this sort of thing.

After all those episodes, I gave up and decided to get this “Rat cade” (Remicade). It seemed to work for a while but I never had a firm stool, I cannot complain saying that I had allergies or any bad side effects like most part of the people do, but I can’t say either that Remicade was doing its job properly.

One day I remembered when I was very young in Brazil, I used to take an orange powder whenever I had diarrhea, and as far as I can tell you, it was more than enough to control them.

The name of the powder is the famous “Metamucil”, but for colitis I thought it’d go on the wrong direction considering that it is a powder rich in fibers, something that would help constipation and not “running ass”.

I started with one spoon a day before bedtime and on the very next day I felt a big difference. My stool had some form and the so called “poop time” decreased dramatically.

So I decided to try it, a nurse went to my house, collected my blood and a couple days later my GI doctor called me saying that my body was fighting back “Ramicade”, creating anti-bodies and the medicine was no longer effective.

I felt something different when he said that, and I asked him “What about if I just stick with “Metamucil” instead? He answered what everybody knows “Metamucil won’t bring any harm, but will not heal you either”!!! So he tried to give me symphony, I told him that I had to think and would contact his office once I decided.

So, I just wanted to say that I’ve been taking “Metamucil” one spoon a day for almost six months and I never ever had such a good quality of life like now.

I have one or two bowl movements a day, I can’t say that my stools are always firm, but my weight increased, I eat everything with no restrictions whatsoever, and I also take multivitamins and probiotics to give some extra help.

Now, I’m in Brazil and just came out of a colonoscopy, according to the results the majority of my colon is in remission, only a small part, some dots are still inflamed…but come on, I’ve been taking for a little bit more than 6 months, I look like a new person and feel brand new again.

The doctors have this idea about alternative medicines, and there’s nothing we can do about that to change. I remember when he told me, if you don’t go so much to the bathroom and you have some form on your stools, no blood and you’re gaining weight of course you are healing. That’s why I never gave up on “Metamucil” which was giving me that quality of life so expected.

As far I as I understand, please correct me if I’m wrong, “Metamucil” removes the excess of water from your intestines, reason why I pee more and poop less, that’s all I needed to heal my colon, even if it is little by little, but without strong drugs and insane diets.

We all know that some people react differently when dealing with drugs or alternative medicines, but one thing is true, I don’t neglect the real medicine but what exactly is the “real one”? as long as you feel better and find your path for the remission that’s what really matters. Don’t forget that If you don’t believe in yourself nobody will … if you don’t believe you can heal yourself you won’t, that’s the true.

We are our own doctors, nobody knows you better than yourself.

Wish you guys health and peace

God bless you all

I started with the Mesalamine family, Remicade. Now I just take Metamucil, multivitamins and probiotics

I’m originally from Brazil but I’ve been living in Florida for almost 11 years.
My colitis story started 2 years ago when after a terrible fight with my girlfriend I felt that the disease decided to take over my body. The symptoms began mild but suddenly aggravated considerably.

50 thoughts on “Remission with Metamucil”