Question Regarding Blood Thinners and UC 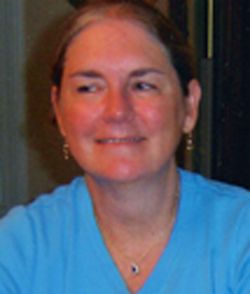 My name is Joyce and I am a 55 year old woman who is living in the sunny state of Florida. I was hospitalized and then diagnosed in April 2012 with Ulcerative PanColitis. I was in remission until recently when I was put on the blood thinner Coumadin. I am currently med free for the Colitis, which, of course, runs counter to what my Doctor wishes.

I am into anything crafty and love to read. I always have ongoing projects in cross stitch, jewelry making and beading and whatever else I see that grabs my interest. I am originally from Massachusetts and have since retired and moved to sunny Florida :-) I get easily stressed, have been that way my whole life so am really trying to RELAX and hoping retirement will help that!

Currently the only symptom I have is bleeding. But it has been constant since starting Coumadin.

I was very fortunate to have found Adam’s website right out of the hospital after being diagnosed. It has been a beacon of inspiration, encouragement and knowledge. So thank you Adam for all you do for us UC’ers. Your ebooks are fantastic. I have tried Asacol and Lialda and have found that I am sicker on them than off of them. I opted to follow Bev’s advice and recommendations. Thank you Bev! Once I was able to taper off the prednisone that I was prescribed at my diagnosis (that took a total of 6 months!), I have been med free and mostly in remission. Occasionally I see symptoms of a flare and by making sure that I am following a very bland basic low fiber diet and increasing my L-Glutamine intake I have been able to nip them in the bud. Everything was going along as smoothly as can with UC when I found out that I had to start taking the blood thinner Coumadin and would be on it for life. I had a stroke back in 2011 an d after much testing and waiting it was discovered that I have Mixed Connective Tissue Disease which includes Sjogren’s and a Lupus Inhibitor (which probably caused the stroke). The UC would be considered part and parcel of the Mixed Connective Disease. Seems my immune system doesn’t want to play nice with the rest of my body.

After starting the Coumadin I noticed some bleeding, no other UC symptoms, and the Doctor put me on suppositories thinking it was hemorrhoids and the Coumadin was keeping them bleeding. The Anucort is not working at all. I will be seeing the GI again next week to follow up. He mentioned the next step would be Remicade! Seems a giant leap to me to go from suppositories to Remicade. No?

MY QUESTION TO ALL OF YOU IF I MAY: Does anyone else take Coumadin and if so, how does it affect your UC when you are flaring? Are you able to get your flares under control without stopping the Coumadin (which I cannot do)? I really feel like I am between a rock and a hard place as I need to take a blood thinner but with a disease like UC where you have the potential for bleeding ulcers….the blood thinner will just exacerbate whatever is going on!

The only medication I have found that has helped me has been short runs of Prednisone to get the initial bleeding stopped and then I am back to diet and supplements.

55 year old woman living in the sunny state of Florida. I was hospitalized and then diagnosed in April 2012 with Ulcerative PanColitis. I was in remission until recently when I was put on the blood thinner Coumadin. I am currently med free for the Colitis, which, of course, runs counter to what my Doctor wishes.

6 thoughts on “Question Regarding Blood Thinners and UC”