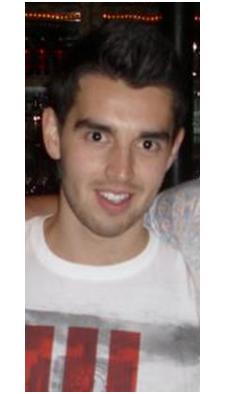 I have just been diagnosed with Ulcerative Colitis last week (Mid January 2013). I’ve had six months of stomach problems which have been getting gradually worse. Six weeks ago I got really ill and I had constant diarrhea throughout the day and night. I lost my appetite, all motivation and felt terrible. I was an extremely fit 24 year old man weighing 12 stone 8 lb who exercised 4-5 times a week and played Football to a high standard. That was just 6 weeks a go, I’m now 11 stone 4 lb. I have lost a considerable amount of strength and muscle and I have had to take a break from playing Football.

Most people would describe me as a easy going person who enjoys life and has a good sense of humour. I have a passion for health and fitness and I am a health trainer working for the NHS in Essex, England. I love playing sport, particularly football, and going to the gym. I have always looked on the positive side of things and have always striven to be the best I can be to fulfill my aspirations. I am currently trying to stay positive and not let my diagnosis of UC affect my life but I am worried it may have a negative effect on my confidence levels and prevent me from doing the things I want to in life.

I currently have stomach cramps and bloody diarrhea throughout the day and night. On average I am currently going 15 times a day. I have a constant headache and I am always tired. I have lost 7lbs in the last week and I am lacking the energy and motivation to exercise.

Six months ago I started to notice blood in my stool, I wasn’t too alarmed and put off going to the Doctors. Things got gradually worse and I started to have an urgent need for bowel movements and I was getting woken up 4-5 times a night to go the toilet. Six weeks ago I got really ill, I had no appetite, felt terrible, had a constant headache and the frequency of my bowel movements got worse. I was being woken up 10 times a night with diarrhea so I was severely sleep deprived and I was too tired to go to work. Since I felt terrible and the frequency of blood in my stool had increased I went to the Doctors. I was told it could be IBD or IBS. My blood tests showed a raised inflammatory marker and I was referred to a Gastroenterologist. However the appointment was not till March 2013. Over the Christmas period of 2012 I was getting worse. I went to A&E in Cambridgeshire, had more blood tests and I was told “it’s nothing urgent you need to wait for your appointment in March.” To me it was urgent, I couldn’t live a normal life and I was losing weight and I was surprised how quickly they just dismissed my issues. A week later when I was back in Essex I went to my GP and he rang the hospital to see if I could be checked over again. I went to the hospital straight from the doctors and after more tests they decided to keep me in. I was in hospital for six days after again finding that my blood inflammation markers were high and that I had iron deficiency anemia. I had a flexible sigmoidoscopy and I was diagnosed with UC. In a way I am relieved I finally have a diagnosis so I can receive the appropriate treatment but I am also shocked that I was expected to wait until March before anything could happen!

I am now concerned how UC will affect my life and particularly my ability to exercise and play football. Since I am newly diagnosed I have so many questions and worries I can’t list them all. I am worried I will never get in to remission and if I do I am worried I will have regular flare ups several times a year. Am I going to have to drastically change my diet and give up alcohol? When you were newly diagnosed was there anything that helped you come to terms with the disease and did you find anything that helped you begin a successful road to recovery?

I am currently taking Mesalazine, Prednisolone and Mebeverine.

I am going to be tapered off Predinsolone quickly and I will be only taking it for a month. Reading the side effects and people’s experiences of this Steroid I feel quite relieved that my Doctor has only prescribed it for a month.

I have just been diagnosed with UC last week (Mid January 2013). I’ve had six months of stomach problems which have been getting gradually worse.

7 thoughts on “Newly Diagnosed with Colitis”

previousA Girl with Colitis Walks Into a Room
nextI Have UC, But it Doesn’t Have Me