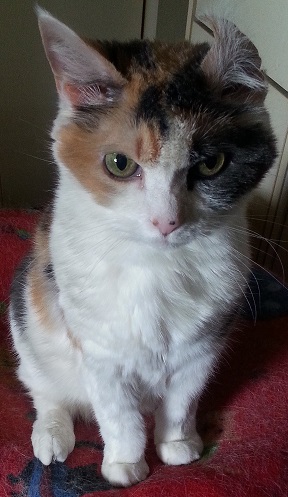 Karen isn’t big into social media and internet…so she opted to include a picture she liked for her profile shot, who else likes cats out here!!??

I began experiencing Ulcerative Colitis symptoms in February 2015. I was referred to a GE who saw me in April 2015, (almost a two month wait), and had a colonoscopy with a diagnosis of left-sided colitis in May 2015.

Some background about Karen:

I’m 44 yrs old, and currently live in Pennsylvania. Hobbies include anything to do with animals, volunteering or fostering, and playing board/card games with family and friends.

Gas, bloating, some abdominal pain if I eat the wrong food.

I no longer have any bleeding, or pus with my bowel movements, and I generally have a bowel movement twice a day. I still have issues with gas and bloating, but not nearly as bad as it was prior to my diagnosis and taking medication. My GE has described my scenario as a mild to moderate case that is low in my colon and rectum as of now.

I was a half-a-pack a day smoker for 20 years, and I used a high quality E-cig with e-liquid that contained 12mg of nicotine to help quit smoking. So between the time I put down the cigarette, picked up the E-cig and stopped using that, it was 2 months. Four months after that, I developed Ulcerative Colitis symptoms.

I also suffer from anxiety attacks on occasion, which I try to control with yoga and a 5-7-9 breathing technique, and do not take medication for this.

I feel confused a lot of the time, and have been scouring the internet for any information I can find regarding UC. I understand that UC is different for everyone, and that there is not a specific diet plan one can follow for this.

I’m also confused about what remission means for UC. Am I in remission because I no longer have bleeding and pus with my bowel movements? Or does experiencing gas/bloating/abdominal pain if I eat the wrong food, keep me from the status of remission? I’m guessing remission has a different meaning for everyone. My GE described remission as no bleeding/pus/inflammation.

Additionally, I was recently diagnosed with flexor tendinitis in the smaller toes of one foot, which is really odd because there was no precursor to the sudden pain I had with it. It was a matter of me sitting at my computer one moment, shifting my foot back to get up, and then instant pain in my toe. It felt like nerve pain. I checked to see if I stepped on something but there was nothing present.

The podiatrist wondered if I had something in my shoe that rubbed the area, and I never noticed, or perhaps I had a foot habit that I wasn’t aware of. I’m not a runner or jogger, and I can’t think of any activity of over-use that would have caused this. I swear it’s the Lialda, but doctors think I’m crazy. It’s been two full weeks now, and it’s slowly getting better, but I wonder if anyone else has experienced things like this?

4.8 gm of Lialda, once in the morning; 1.0 gm Canasa suppository at night as needed; daily multi-vitamin.

I was never one to take pills for anything, because I also worry about side effects and addictions. I expressed concern to my GE, as well as my family doctor about the Lialda/Canasa dosage, and the overall effect it would have on my kidneys, and neither of them seemed concerned about it at all. I was previously taking Ibuprofen 800 mg (as needed), along with Flexeril 10 mg to treat chronic pain/muscle spasms associated with herniated/bulged discs in my spine after an auto accident 4 years ago. I haven’t taken IB since.

Currently I’m working my way through an elimination diet to determine what I can or can’t eat at this point. I’m keeping a daily food journal, and have become a I’m also going to try juicing because I find I cannot digest a lot of fibrous fruits and vegetables as well as I used to.

I’m also working on some yoga exercises to help reduce the gas and bloating I have.

I began experiencing UC symptoms in February 2015. I was referred to a GE who saw me in April 2015, (almost a two month wait), and had a colonoscopy with a diagnosis of left-sided colitis in May 2015.

previousTeamwork – Mick Never Had Colitis, But Cancer was Reason for Bowel Removal
nextIt’s 2015 and I’m New to Ulcerative Colitis