Newly Diagnosed with Colitis – Ben’s Journey Back to Good Health 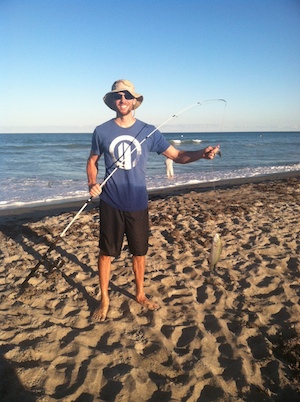 Hello, my name is Ben, and I’m a 30 yr old male, and veteran of U.S. Air Force. I started having g.i. problems while deployed 2008-2009, and was diagnosed proctitis in January 2010 by pathology report after my first scope. However, my civilian gastroenterologist failed to follow up/treat me for this and instead carried a diagnosis of irritable bowel and celiac disease (which I do seem to have). I actually just found this error this summer when I finally obtained my medical records from Oklahoma. I lost 45 lbs over the next few years despite following his regimen and then started getting treated through the VA system in 2013. For the last year and a half my flares have increased to about every 3-4 weeks. I was scoped twice this year, and the 2nd scope in September finally revealed proctosigmoiditis and I was able to begin treatment.

I’m a born and raised Oklahoman, but my wife and I moved to the Orlando, FL area last year so I could pursue seminary out here (Masters in Biblical Studies to be specific, I may one day be a pastor). I like to fish and do anything I can outdoors when I’m feeling up for it.

Currently His Colitis Is…

I just finished 5 weeks of prednisone, so I guess I might be in what you would call “remission.” However, my gut has been feeling a little shaky the last few days since I’ve been off and started Imuran. BM’s are down to under 5/day, but I am still having some severe pain before my first movement of the day.

UC has definitely altered my life, and is continuing to. I was medically discharged from the service due to my health conditions in 2011. I have developed several other “auto-immune” issues, I’m guessing because of the unraveling of health in my gut. I have neurological problems, chronic fatigue, joint and muscle pain, among others. I have come to understand one of the biggest things with regard to managing UC is managing stress, and I am learning but have a long way to go. I had to withdraw from half of my classes and take a leave of absence from the work I was doing. Going forward, at least for now, I’ll make sure I have a much smaller plate than before. This has been a humbling disease, and not all of that is bad I would say. I am definitely more compassionate toward other folks who are suffering and dealing with tough things. It’s hard to say if this whole ordeal has been more difficult on me or my wife… She is a n amazing woman and cares for me at a level that is truly amazing and can only be summed up in one word: grace. I want to get well for her. All she’s ever known is the sick me. She dated, got engaged to, and married the sick me.

My biggest questions revolve around medication and expectations. I know everyone is different and no two UC’ers will likely respond in the same fashion, but I haven’t connected to a support group yet. After starting prednisone, which I seemed to respond very well too (except for the insomnia), we tried balsalazide (Colazal), however I was immediately plagued with horrible stomach pain (upper, not my lower gut UC pain) and almost passed out, so we had to discontinue. I know the CCFA (and docs) say that if you react negatively to one drug in the class of “aminosalicylates” that it means you cannot tolerate any of them or have an allergy. However, they specifically say that bleeding and diarrhea (or a worsening of UC symptoms) would be suggestive of this, which I was not having. Were any of you able to tolerate and of the 5-ASA drugs after responding negatively to another? I feel like we gave up too quickly on that class of drugs.

I just started Imuran last week after finishing my prednisone taper. I’m wondering about people’s experience with this drug. I’ve read it can take months to kick in, and my gut is already started to feel a little shaky and I’m having some horrible “flare-type” pains in the morning before my first movement. However, my movements are still 3-4 per day (so far) which is incredible coming from my usual 15-25 per day the last 6-8 months. Also, since starting the Imuran, I’ve gotten pretty sick. We thought it was strep at first, but now it feels like a nasty head cold or possibly a sinus infection… coincidence? I’m headed in to the clinic tomorrow to get a CBC drawn to see where my white cell levels are, so I guess we’ll find out soon enough. Did anyone else get sick like that with only being on Imuran for less than a week? I only ask because I do not get sick often, and haven’t had a cold in years.

I currently receive all of my healthcare through the VA health system, which can be a challenge to say the least… however I feel I do have a great g.i. doc, at the very least one who truly cares about me and is eager to help. While that is a huge comfort, I do believe the VA is largely unequipped to truly care for me and I hope I can get well enough to secure some better healthcare options in the future. My wife and I employ all other means we can to hopefully assist in the healing process. Because of my Celiac disease (diagnosed 5 yrs ago), diet and nutrition has been a huge part of our lives for several years, and we now follow our own version of the SCD diet which seems to be helpful.

Thank you for letting me share a little piece of my life, and for sharing your own. I’ve learned so much and been helped in so many ways by reading your stories. Keep fighting.

In the trenches with you,
Ben

I’m a 30 yr old male, and veteran of U.S. Air Force. I started having g.i. problems while deployed 2008-2009, and was diagnosed proctitis in January 2010 by pathology report after my first scope.