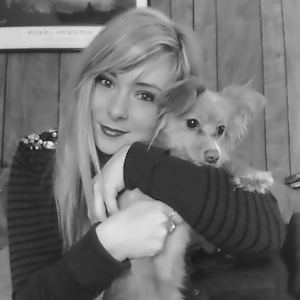 That’s me with my dog!

I am a full time barista, it’s my life. I will own my own shop one day. I love photography. Most people would describe me as spontaneous, goofy, friendly, loud, random. I was a three sport athlete until I graduated high school in 2008. Gymnastics, Cheerleading, Volleyball, Tennis, Dance, Swimming, etc. I did as many sports as I could until I started getting more ill in 2009.

I am currently in my first flare. I have blood with every BM, intense and random burning sensations in stomach, canker sores, tiredness, body aches, tension head aches, bloating, bladder pain, and extreme tenesmus.

I came down with a horrible cold in September 2012, shortly followed by a respiratory infection that kept me awake at night dry heaving. I noticed blood on my toilet paper Oct. 24th 2012. My mother and friends told me not to worry, it was most likely an internal hemorrhoid. 10 days later, and still bleeding I went to quick care, where the doctor I saw did a physical “feel” for a hemorrhoid. Tested for blood (which was positive) and asked me many questions. She told me a colonoscopy would be necessary.

A week later I get my colonoscopy done by a surgeon (no gastro’s in my town). I left super drugged up with no papers or anything. The doctor calls me the next morning and leaves me a voice mail. “umm you had some irritation, take some ibuprofen.” WTF I’m bleeding out of my A*s, no idea from where, and this guy tells me nothing.

the following week I follow up with the lady Doc. that referred me to him. Since my colonoscopy I started passing mucus, puss, and small tissue like stools. I ranted to her about how poor the doctor was and that I felt frustrated and sad and scared. She was soooo very kind and understanding. She ordered a blood test to make sure I wasn’t losing too much and referred me to a gastro 40 miles away. She then pulled up my “results” that read, multiple ulcers up to 8 inches inside rectum. biopsies came back non specific. NEWS TO ME! “take some ibuprofen” a blood thinner? really?

Three weeks later I meet with my gastro for the first time. His first words were “so i’m dong a follow up on a colonoscopy I didn’t do?” I could tell he was as frustrated as I. I quickly interrupted him and told him I had had a bad experience, that the surgeon told me to take ibuprofen, and that I was getting worse. his facial expressions quickly changed and he started to take tons of notes on everything I said. he put me on a prednisone taper for 20 days. 40 mgs and down. he ordered protien reactive blood tests for crohns and uc. I noticed small improvements from pred. but I never stopped bleeding. I met with him again a month later. Still bleeding. He was sad that the pred didn’t work, but sadder to tell me my UC blood test came back positive. I asked him 100 questions about it, I had already new that’s what I had, but it was nice to finally have an answer, or a name to put too my symptoms. I develop new ones every day it seems. I see him again on Feb. 4th 2013.

I have only done a 40mg prednisone taper, and it didn’t work at all. Made me angry, uptight, and irritable. I had panic attacks and mood swings. I will never take it again.