New to the UC Group 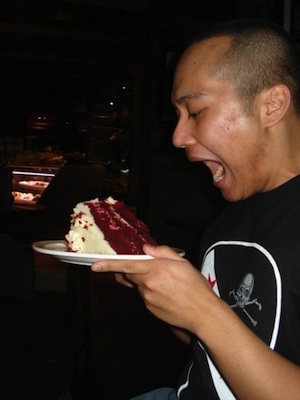 me thinking about the red velvet cake…:)

I was just recently diagnosed with UC after my first colonoscopy. I’m a brand new UC’er who’s looking for some support and advice!

I was born in New York, but lived most of my life in Southern California. I’ve been a DJ for 14 years and I work for a morning radio show in Los Angeles. I love all genres of music and I’m a huge basketball fan. Breaking Bad, The Walking Dead, Entourage, and Chappelle’s Show are some of my favorite TV shows

New to the UC Group

What’s up, everybody! My name is Jason. I’m 29 years old and I just got diagnosed with UC last week. I’ve always considered myself to be a foodie, meaning I LOVE FOOD and never really had any restrictions on my diet throughout my life. I was never lactose intolerant or had any food allergies, so I could and did eat anything I wanted. I’m not a huge guy – I weighed 135 pounds all throughout high school and I’m currently around 160. I consider myself to be an active person – I like to go hiking, play basketball, lift weights, and do some cardio. I thought I was pretty damn healthy. That all changed a few years ago.

Around April of 2012, I started to get some bad stomach cramps out of nowhere and my stomach started making crazy sounds. I thought it was gas so I just went on like everything was cool. Then my poops started to become softer and softer and eventually I was having diarrhea on a normal basis. Again, I just kept it moving like everything was fine. Then I started seeing blood in my toilet. I thought it was just hemorrhoids so again, I didn’t tell anyone about my symptoms and thought they would all go away. It got so bad that I lost about 20 pounds and I felt really weak and looked pale. My hip started to hurt like crazy. I thought to myself “I’m only 27 years old, why the hell yea am I feeling like I’m 90?” I finally called my mom and told her what was going on. She’s a nurse, so when I told her what was up she immediately wanted me to go to the Emergency Room. I did the next day and was given 2 IV bags to replenish all the fluids I had lost, and they did some blood and stool tests on me. The doctor diagnosed me with having a stomach virus. He said it could be bacterial, but couldn’t really pinpoint what was going on. I was given Flagyl and some other medication, and after finishing them both I was back to normal – or so it seemed.

I continued to live my life eating whatever I wanted. I didn’t have anymore stomach cramps or sounds and everything seemed ok. I had some diarrhea here and there but thought nothing of it. Fast forward about 10 months to February of 2013. My girlfriend wanted to try this new 1 month diet challenge that she saw at Whole Foods. It basically focused on more greens, less sugar and starches, and a little protein. I decided to try it with her. Everything was all good at first – we would make these recipes at home and they actually tasted great. A few days into the diet and I started to have those crazy symptoms again. My stomach started cramping, the sounds came back, the diarrhea came back, and the blood returned…awww shit.

Since I kinda knew what was going on, I decided to call my doctor to get a check up. I told him what had happened almost a year ago when I went to the ER and that the same things were happening again. He did some blood work and took some stool samples. Just like the doctor in the Emergency Room, my doctor couldn’t figure out what was happening. All he suggested was that I stop that Whole Foods diet, switch to the BRAT diet (bananas, rice, applesauce, and toast), and he prescribed me with a probiotic called Align. I did what he said and the symptoms went away.

A year had passed with little to no symptoms or concerns. I thought everything was cool until about a month ago. Almost to the exact day of my flare-up from a year before, my stomach started to go crazy. The diarrhea came back and so did the blood. Sonofabitch, here we go again! I tried to nip this thing in the bud by eating the BRAT diet again and buying a probiotic that I kept seeing on TV called TruBiotics. A week went by and nothing changed. Another week went by and I was getting worse. I didn’t want to call my doctor because I did everything he told me to since the last time and I didn’t want him to prescribe something that would temporarily fix me. I wanted to end this bullshit once and for all. I went online and googled my symptoms. A lot of the search results came back with Crohn’s disease and/or Ulcerative Colitis, so I did some research. Then I decided to find a GI doctor around my area.

I found a popular GI doctor located in LA named Dr. Choi. He seemed to have good reviews online and has a helpful website (laendo.net). I made an appointment ASAP. When I first got to his office, I was surprised to see a lot of people around my age in the waiting room. It kinda gave me hope that this guy could finally help me out. I told him what was going on over the last few years and he was very helpful. Based off what I was describing he immediately thought it was UC, but couldn’t know for sure until he did a colonoscopy. UGGHH, that was definitely not what I wanted to hear. We scheduled the procedure for the following week and holy shit was that a tough week. I’m sure some, if not most, of you have had a colonoscopy. The prep for that was terrible. Let’s all say it together now…”FUCK GOLYTELY!”

So last week I had my colonoscopy and the results didn’t look good. Dr. Choi showed me some pictures and said that 2/3 of my colon was really inflamed and that I was bleeding a lot. I asked him if my diet played a role in any of this and he said NO. I asked him if stress was a factor, he said maybe. I work for a morning radio show and my sleep pattern is terrible. I start work at 3AM Mon-Fri and I average maybe 4 hours of sleep every night. I asked him if that played a role, he said possibly. It was tough to hear, but my family and girlfriend were there for support so that helped out a lot. Before I left, he prescribed me with Folic Acid pills and Sulfasalazine. I’ve been on the meds for a week now and so far no major side effects. The stomach cramping and sounds are still there but have calmed down, I’m still having diarrhea, and the blood has lessened but it’s still present, and my lower back has been hurting. Not sure if it’s from the meds, sitting too long, or sleeping in a weird position. I’ve decided to try the SCD diet and some of Adam’s recipes. Been on it for 2 days and I think things are getting better. I’m going to finish these meds and stick with the diet. I have a follow-up appointment next week with Dr. Choi to go over some biopsies he took. Hopefully all is well.

I’ve been on this website for the last few days, reading Adam’s story and a lot of your stories. I had no idea so many people in the world have UC and I’m thankful that there’s a community out there who knows what I’m going through. I just wanted to thank you Adam for creating this website. It really helps to know that I’m not alone.

“do you have any suggestions for snacks besides bananas and deviled eggs?”

What up buddy.  Thank you so much for throwing your story out there.  You submitted your story March 8th and I apologize to you and the 19 other people who are still waiting to get your stories posted.  So thx again for hanging in there.

Suggestions besides bananas and deviled eggs…

Here are some ideas to think about once you have gotten your symptoms under control with the basic foods I mentioned:

Since you’re still way new to the diagnosis, diet changes on top of UC must be weird as hell and alot to adjust too.  No worries, things will calm down soon and be more manageable after the freak show early days we all go through pass.

More than anything else though, there’s something pretty important that we all need to think about, remember, realize, and most importantly…TAKE ADVANTAGE OF…

You might not know it yourself, but I’m guessing your co-workers, girlfriend(s), parents and everyone else know.

It’s a hard as hell thing to do, but way important.  And in reading your story out loud to my wife just now, we both felt you’re for sure still on the bright side and seeing things half full.  (I sure hope we’re right)

If you’re liking your current GI doc, great.  If not, no worries.  There’s a CRAPLOAD of GI docs down in the So. Cal area.  (Heck, you can even take a look at the GI docs that have been reviewed by fellow UC’ers here on this page of the site: Find a GI Doctor list

I was just recently diagnosed with UC. I’m a brand new UC’er who’s looking for some support and advice!

2 thoughts on “New to the UC Group”