My Ulcerative Colitis Experience and Colonoscopy

Here is a photo to go with my story. I have lost nearly 2 stone since then!

I was diagnosed with left side Ulcerative Colitis in May 2014 following a sigmoidoscopy in April. I suspect it could have been creeping up on me for as long as a year or more before diagnosis. The bad: I have lost weight, lost muscle and strength and haven’t had a holiday for years. I have become obsessed with reading about UC and testing various remedies. I have never been in remission and struggle to get out and about without the occasional reluctant help of loparidamide(imodium) due to the ridiculously frequent BM’s.

On the plus side I have no pain and for the last 18 months have rarely seen blood. I also remain positive regarding eventually getting into remission without an operation. UC is much more than disease, it is a way of life.

Some background information on Paul:

I am originally from Hull City in East Yorkshire, UK. I worked for a major petro chemical company for 31 years in various roles including Operations and Safety Training Superintendent and Environmental Advisor. My current main pastimes are Family History and playing guitar – not very well I might add. Until recently I did environmental consultancy work and vermin control on farms in the near region; all of which I enjoyed. UC put a stop to that.

Up to 10 days ago I was having 28+ BM’s per day all 6 to 7 on the Bristol scale although volume is frequently low. I see mucous but rarely see blood and have no pain. Urgency has been a major problem with frequent failures!!!

My Doctor decided a colonoscopy was needed which I had in August 2014. This was a most painful experience that caused me to hyperventilate 1/2 way through the examination due to a ham fisted bad tempered operative who inflated me so fast that it felt like I had been punched in the stomach. He then rived about in there and finally did not release the air from an over inflated bowel leaving me wind locked and in pain for hours. He left the room immediately on completion and I never saw him again. To alleviate any concern, people who are due for colonoscopy may have I should say I learned later that this experience and his disappearance were very far from normal. Maybe he wondered in off the street (haha)

My bowel was clear except for the original ulcer site 1/2 way up my descending colon which had improved but things went downhill from then on. More frequent BM’s more blood and mucous.

Day 0. MoviPrep laxative was used to completely clear my bowel. This was more a hunger survival course that anything traumatic. The boredom and discomfort of spending 2 x 2 hour periods in the bathroom was somewhat alleviated by having the radio on and doing puzzles. According to the instructions I should have been able to safely go to bed by 11pm but there were “wet” events into the night but only water! I told the Hospital about this and was told “Oh yes we get that” 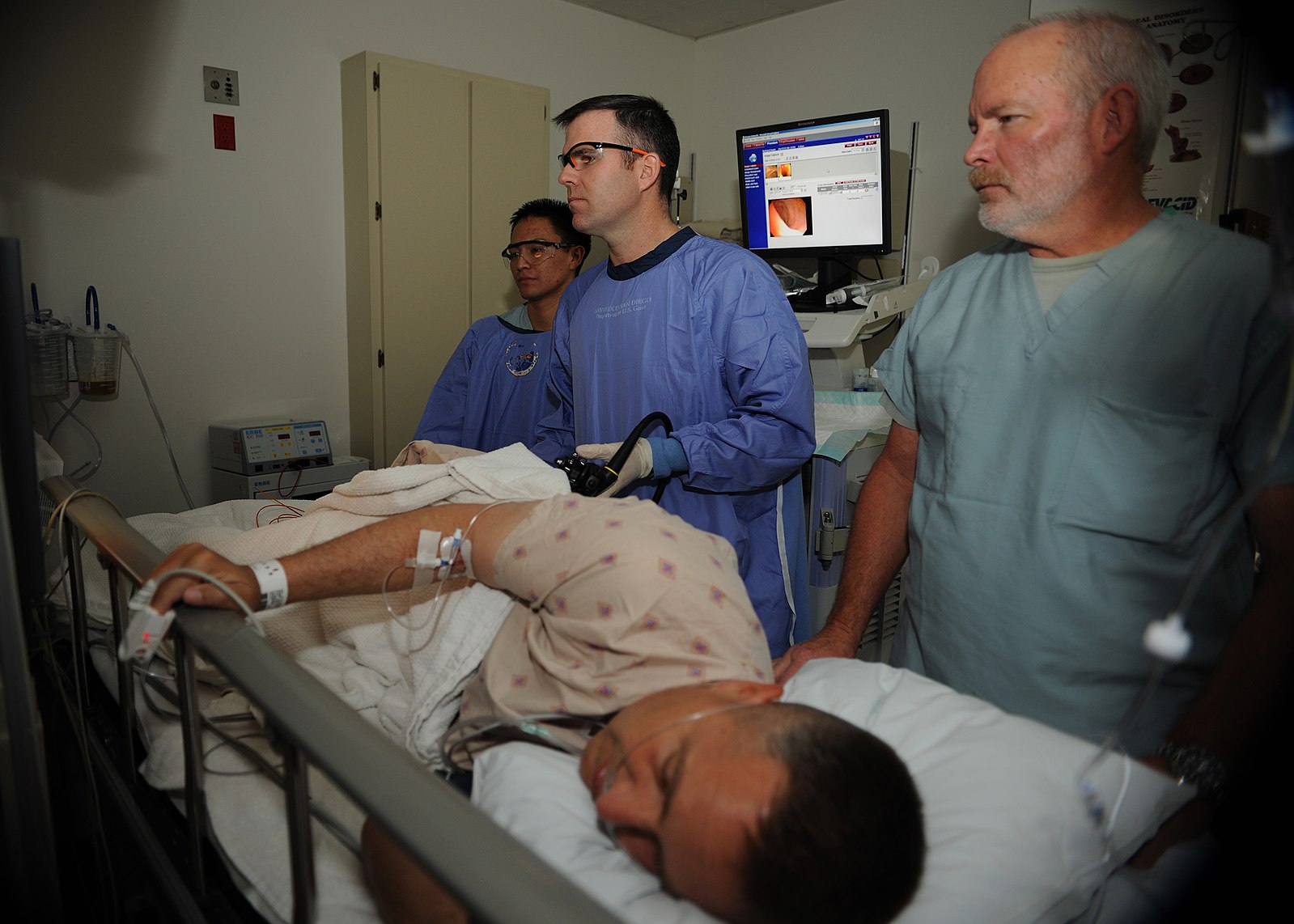 (example colonoscopy scene above, not the exact case for Paul, but potentially similar)

Day 1. The examination
I attended Hull Royal Infirmary on 9th October for a 10:30 appointment, feeling very apprehensive. Last time I was hurt as I mentioned above. The consultant himself carried it out under mild sedation this time. No problem at all. Back in recovery in 20mins. The consultant came to see me with his report. Not good news. I now have moderate pancolitis. That is a significant worsening of my condition which I guess was expected judging by my recent health. He wants me to go onto a biologic drug but my case would have to be reviewed by a multi disciplinary panel for approval – or not. Three were mentioned: Golimumab, Infliximab and Vedulizumab. Details would be given at a later appointment.

The rest of day 1. was fairly uneventful and although I expected not to have any BM’s there were three of blood stained mucous.

I used the opportunity of a completely empty bowel to cram plenty of home made SCD yogurt and shop bought yogurt containing different probiotics down before eating anything else hoping that it might help seed my bowel with good bacteria.

Day 2. Very few BM’s some urgent, some not. Guess my bowels were starting to fill up. More yogurt and plenty of calories mainly cheese, mackerel, peanut butter, a little white bread and some chicken / chicken broth. I should note that today I started a course of . I didn’t want this but prior to my colonoscopy my situation had become intolerable and as far as I could see the ulcers, lots of them, were still there just waiting to kick off again. Earlier I had to hold off the prednisolone so as to make the colonoscopy valid. I now have to get a grip of the problem – even if it is only temporary relief.

Days 3,4,5. BM’s all non urgent. Not very productive. Things were generally gut-quiet so I thought if this was to last a few days I would use the opportunity to get some more calories down to put a bit of much needed weight on. Nutrients may be getting absorbed due to the slower transit time. Overall a good period but not holding my breath!

Days 6,7,8. Still not experiencing my normal number of daily visits, (normally anywhere between 12 and 28+) and consistency has not returned to No. 7 on the Bristol scale which is good. This has to be the prednisolone kicking in. I am still eating a lot including lots of SCD yogurt and hoping it is doing some good. My guts seem to be still settling. A bit scary though. I tend to make a dash for the bathroom at every little twinge. A feeling I am sure all UC’ers are well aware of.

Day 9. I heard from the IBD specialist nurse today. My case has been investigated by the multi-disciplinary panel and they have approved the use if Infleximab(Remicade) provided my bloods and an x-ray meet the requirements. They do want me to try Budesinide MMX first though. Apparently this is similar in action to Prednisolone but focuses only on the colon and does not swamp the body so side effects are much reduced. I must confess the thought of taking powerful biologic potentially disruptive drugs such as Infleximab scares the hell out of me.

I am hoping the clean start after the colonoscopy combined with masses of probiotic yogurt, glutamine, turmeric and diet care including chicken bone broth will give me enough of a start to hold off on the biologics. Normally predinisolone starts to fail as I taper off so the sooner I get on to Budesinide the better – I think? I have an appointment with the consultant at the end of November when a final decision will be made.

It is worth mentioning the massive support I get from my Wife and live-in Son. Also my brothers and sisters are all on board and very supportive. Lucky or what!

If anyone has any views, questions or indeed answers I will be more that happy to receive them. Why am I not in pain? Why am I blood free but in flare?

I was initially prescribed 1.6g oral mesalazine daily. My mesalazine was stepped up until by December 2014 I was on maximum dose of 4.8 g/day and still am except for a few small breaks.

Azothioprene for ten Months but had to give it up due to liver and joint pains that stopped within days. The azothioprine had limited effect for me anyway.

Prednisolone. Between 2014 and July 2017 I had undergone seven prednisolone treatments as well as trying foam and liquid enemas and mesalazine suppositories which I was frequently unable to retain. Basically between being diagnosed and now I have never been in remission but occasionally felt close to it.

SCD diet tried once for 6 days and once for 7. I think I was in too much of a flare both times to hope for any success. May try again in the future. Two positives came from this. I now make SCD yogurt every week and love it. I also now regularly make and freeze chicken bone broth/soup.

Glutamine seemed to do some good but again I think the flare overcame it. I pushed this to 40g/day as recommended on another web site but dropped it to the current 10g/day for safety reasons.

Turmeric. I have been taking this for a few years and found it helped greatly with joint pain but no (known) effect on my UC. I take 2 capsules/day of opti-Turmeric.


Also taking high dose B12, a multi vitamin and glucosamine.

I am a 71 year old married male with a once very active life before UC took a grip 3 1/2 years ago. I live in an East Yorkshire village about 10 miles from the coast and 3 miles from the Humber Estuary. I have T2 diabetes that is normally well controlled by diet.

5 thoughts on “My Ulcerative Colitis Experience and Colonoscopy”