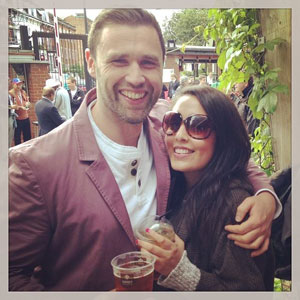 recent picture of Yasmin and Morgan

I’m 24 years old and live with my lovely partner Morgan in Farnborough, Hampshire. Ulcerative colitis symptoms started January 2012. No periods of remission at all until October 2014.

Some more about Yasmin:

I enjoy time with friends and family and our lovely family dog Lucy. I’m also a massive property geek and run a small renovation business with Morgan – one we hope to work full time for one day! I wanted to share my journey with others just as they have shared with me. This website has given me a lot of hope over the last few years and this is where I first read about FMT (or fecal microbiota transplant).

Last time I wrote I was still on Azathioprine (Aza). It’s only been 6/7 months since I wrote but so much has changed. My life has changed dramatically.

So the Azathioprine was making my hair fall out (this started in about March). At first I thought it was imaginary, so did my family, but it was relentless and it started to thin very quickly. I don’t know what triggered it, I had been on Aza for about 8 months when my body started to tell me it didn’t want it anymore.

A few dose changes over the next few weeks/ month made no difference and so my IBD team changed the meds. They put me on 6-Mercaptopurine (6-MP) and Allopurinol and told me this was a purer version of the Aza and most people don’t experience as much hair loss on this. Don’t quote me on that – I realise over the last two years that sometimes I only heard what I wanted to and I didn’t always take in the full extent of what the doctors were telling me.

June 2014 I had a consultation with the Taymount Clinic in Hitchin enquiring about Fecal Microbiota Transplants (FMT). I paid £150 for an hours chat with Glen Taylor who told me all about FMT and all the good the treatment has to offer. The treatment costs 4k and the waiting list at that point was about 6 months.

I told my specialist at the hospital I was going to book into the Taymount and she said I was crazy to spend so much money on it and that they would do it there for me, at the hospital instead and it would be free on the NHS! The registrar was trying it as something new as he, like me had researched FMT, and it made perfect sense. He would do one treatment for me first as a Colonoscopy and see how that went.

Glen at the Taymount told me that one treatment on the NHS almost certainly wouldn’t be enough (he recommended I have at least ten treatments) but to give it a try if I wanted and book in with the Taymount once I had had the FMT at Frimley Park if I didn’t get the results I wanted.

6-MP didn’t change things, my hair continued to fall out. Big thick handfuls of it in the shower like I had used hair removal cream! The meds were taking more from me that the actual disease.

Along with this was the fatigue, the depression and the nasty UC symptoms of insane cramps, bleeding, frequent toilet trips day and night and the urgency. I can’t count how many times I didn’t quite make it to the loo… I felt like a toddler being potty trained.

I didn’t leave the house much and when I did I was in constant fear of what might happen. I can look back through my facebook photos now and I have a disaster toilet story for almost every picture from the last few years.

I also felt jealous and angry on nights out. I would end up going home early totally miserable that I couldn’t have fun and let my hair down like the rest of my friends. I would attend birthday parties out of politeness, take loads of Imodium out of fear of something bad happening and then spend a week recovering from the one glass of champagne I’d had.

I’m kind of vain :) and so losing my hair just wasn’t an option. I came off the 6-MP, informed the specialist and she told me “If you come off your drugs and you flare again, we are almost certainly looking at surgery being the only option”. Stupid or just desperate, I took the chance and came off all meds waiting in hope for my one FMT the NHS had promised me at Frimley Park Hospital. I was so glad to be the Registrar’s guinea pig.

This was booked in for September 4th 2014. I waited for six weeks – pinning all hopes on the treatment, hoping that everything from that day forward was going to be OK.

On the 27th August, a week before the FMT at Frimley Park, the hospital cancelled due to funding and told me it was unlikely the board would change their minds about allowing me to have the treatment, as the costs were so high and the laboratory couldn’t shut down just for me. I was devastated and in a mess because I had come off all meds and was deteriorating with every day that went by. I sobbed that night, cried and cried. I felt that this was it, my path was written, I was meant to have surgery and have my colon removed.

I was terrified and yet determined to face it through and take on whatever was ahead. My symptoms were getting worse by the day and I knew that the Taymount waiting list was six months so I would have to go back on the dreaded steroids to pull me out of the flare… if they didn’t work then surgery would be the only option.

Thursday 28th August I booked my December slot at the Taymount clinic that would be split five days before Christmas and five days after New Years, a slot that most people didn’t want due to Christmas being in between. I had wasted two months nearly, waiting for the FMT at Frimley Park! Friday 29th I told the Taymount to contact me if they had any cancellations before December as I was very aware of how downhill I might go in the interim.

Monday 1st September the Taymount contacted me and told me a lady from America hadn’t turned up for treatment and so if I could come tomorrow they could get me started with some preparation and I could start the FMT on Wednesday.

Someone was definitely looking down on me that day. I felt so lucky. I told my boss, I found the money and I packed a suitcase. When I look back now I definitely wouldn’t have made the four months in between without a lot of drugs, if at all!
So now for happy part….

I started FMT at the Taymount on Wednesday 3rd September and had a ten day course over a period of two weeks. I turned up completely terrified but thanks to the amazing nurses there I soon relaxed and over the few weeks gained confidence in the science of the treatment and the ground breaking work of the clinic.

I feel sorry for the nurses who had to calm my anxieties everyday. What if it doesn’t work? What if I’ve ruined it? What if the bacteria doesn’t multiply? What if.. what if.. what if..They were so reassuring and sure enough everything they told me was true.

The weeks after the treatment were not easy. Learning to eat really well and letting go of concepts like ‘low residue and starving the bacteria’ etc. But two months on and I am in the best place I’ve been since the horrible UC symptoms started back in January 2012.

The disease inside me has changed. The bacteria has changed its course. My body feels different. I’ve been medication free for three months now and I feel I have left the UC behind (even though some symptoms still persist) its so hard to explain. It just feels different. The urgency is still there but it’s getting better each month and the psychological element of the UC is hanging around a bit.

There’s no more stomach cramps, no running to the loo in the night, no pain. Frequency has reduced to almost normal but I still feel there is a long journey ahead of me to getting back to where I was before. I’m not sure I will ever reach that place.. and I’m not sure I want to.

I eat healthier than ever, I’ve lost 2 stone, I am full of energy and wake up in the mornings without fatigue. I take probiotics daily and supplements. Vegetables are my medicine now. I don’t feel nauseous anymore, I don’t feel exhausted in the daytime, my skin is brighter than ever.

I have my first follow up treatment on Friday and I will continue to have follow up FMTs for the rest of my life. This is my choice, you don’t have to, but right now it’s working for me and so I feel it can only be of benefit. Finally my hair is growing back…. .it’s so fluffy! I have little fluffy patches all around the sides and underneath my normal hair. A constant reminder of what was before and what is to come.

It’s early days so I will update in another six months time and let you all know if FMT worked for me long term.. fingers crossed hey!

Steroids 40mg tapers a few times.
Azathioprine
6-MP, Allopurinol
Suppositories
aminosalicylates (5-ASAs)
biologics- couldn’t be offered to me as not available in my area on the NHS

I also tried the SCD Diet but found it very hard to stick to, although I don’t eat many grains these days, sugar or gluten! And I also tried some slightly stranger treatments like Nicotine patches (this made me get sick) and starving the bad bacteria out (this made me VERY hungry).

I’m 24 years old and live with my lovely partner Morgan in Farnborough, Hampshire. UC Symptoms started January 2012. No periods of remission at all until October 2014.