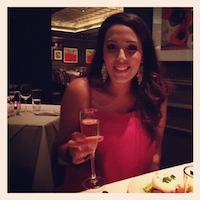 Here’s Yasmin, new to the site and relatively new to UC. (Well, she’s been diagnosed for a year and a half now, so let’s call her a UC vetran:)

I’m 24, had ulcerative colitis for just over a year and a half and have yet to be in remission. Just turned down methotrexate and have decided to try diet changes instead.

I live in Hampshire, with my boyfriend Morgan. We both work full time but also have a property business on the side where we renovate period properties and hope to start building new builds at the end of the year. We enjoy socialising, seeing friends and family and going on nice holidays.

Bowel movements currently 6 per day with blood. Urgency and toilet trips in the night are common. But it’s my own fault coming off the Aza too soon! Back on it now and SCD, so hopefully this will sort me right out :)

Wow. Ok. So where do I even start?

On returning home the doctors began tests for various food intolerances and all came back negative. Then in march I had my first colonoscopy, it showed I had Ulcerative Colitis, mainly in the last 25 cm of my colon.

Over a period of about 6 months I was then put on Prednisone 40 mg then tapering down by 5mg per week, various rectal treatments and then Azathioprine 150mg. Nothing seemed to be working and by September things had got pretty bad. Come October the doctors decided to star over again and put my Prednisone back up to 40mg and try tapering off again over a few months. Again, nothing worked, but I was experiencing all the horrible side effects… weight gain (2or3 lbs a week), mood swings, insomnia (often up all hours of the night), lack of sex drive, moon face and water retention everywhere especially my upper back and thighs.
Its so hard to stay positive when you feel you are losing grip on not only your old life, but also the way you normally look too. I stopped wanting to go out, I stopped seeing friends and I stopped going into work.

So.. December 2013 was pretty bad. I was quite depressed and with it being the festive season it was made even worse by just wanting to go out and have fun and do all the normal things I didn’t feel I could do anymore. I was going to the toilet about ten times a day and this made it almost impossible to go out and lead a normal life.

At this stage I was still completely in denial about diet. Yes. I spent most of 2013 saying “my doctor says this has nothing to do with diet”. I couldn’t have been more wrong. So NYE and a night out in London for my lovely cousins 18th birthday in January meant great food and a LOT of alcohol. This is when things got even worse. I thought I was going to die. Champagne is no longer my best friend.

I was admitted to hospital at the end of January with bowel movements happening about once every hour. I also needed to use the loo about 4 or 5 times a night. I was like a zombie.. A fat moon faced crazy zombie lady who was miserable and exhausted! I spend about eight days in hospital on hydrocortisone IV and towards the end of the stay I began to feel a lot better. Bowel movements reduced to about three a day and I was sent home again on 40 mg of prednisone to taper down slowly over about six weeks.

I enjoyed being home so much, I was signed off work sick for a few more weeks and I just loved being able to eat what I want, drink what I want and just enjoy the days again. WRONG again!!! Within three weeks of being home and the steroids being tapered down, bowel movements began to creep in again and I was starting to bleed and get stomach cramps which was just devastating.

So, something snapped and I decided to go against everything the doctors had told me so far and try to manage the disease with diet. Three days into the SCD diet I couldn’t believe the changes with toilet visits down to about two or three a day and a massive reduction in blood. It felt great to have some control back and to feel like I could someday soon be healthy again. The SCD diet really helped for a few weeks however willpower is not my strongest attribute and every time I felt a bit better I would have something naughty, like chocolate or a few drinks out. My body just wouldn’t be ready for it and it would set me back again by a week or two each time.

Today I am still trying to apply the SCD way to every day combined with azathioprine 150mg ( I came off this temporarily about four weeks ago to see if I actually needed it and my symptoms unfortunately deteriorated again). It turns out the azathioprine that I thought wasn’t doing anything was in fact helping a lot and so I’m hoping now with the SCD diet and this immunosuppressant I can get into remission. I haven’t been in remission once since this disease started.

It’s been quite a journey and I am always looking at new options, one being Fecal Microbiota Transplantation (being performed at a London clinic hopefully early next year) but I just wanted to give some hope to anyone going through what I have been through the last year.

This disease is horrible and it’s lonely and life changing, but it makes you appreciate the good things in life. Myself and my boyfriend Morgan are closer than ever and he has been so supportive and brilliant, and if we can get through this I don’t think anything else will ever seem difficult. My family, especially my mum, has been there every day as a shoulder to cry on and someone who listens to my new ideas every day with patience and hope… Nicotine patches, starving the bacteria out by fasting etc, I have tried it all. Colitis has made me appreciate the important things and people in my life that I never did before.

On a final note I just wanted to say, anyone struggling with the physical and mental impact of steroids to really consider what they are doing to your body and if it’s more harm than it’s worth. Some things will go, like the moon face and the weight, but my joints will never feel the same again :)

I will keep you all updated and hopefully will be posting something much more positive in six months time….

I hope this story gives some people hope that your worst UC flare will get better!!

“Hi Adam. Did you find the first few months of SCD difficult and when did you taper off your medication?”

Thanks for sharing your first story with us. For me, starting the SCD diet was not that difficult or me. Although I’d never been on a diet where I was actually watching what I ate ever before in my life, I didn’t have too much trouble finally doing just that. Come one though, just a few days before I started SCD I was told to contact a Colorectal Surgeon to schedule an initial consultation to map out a plan for having surgery and potentially an eventual j-pouch. And I sure wasn’t wanting to do that back in August of 2009 only 10 months after my diagnosis. So I’m sure my relative easy of changing my diet was because I was MOTIVATED in a major way.

But, even with motivation, what helped me get past the hump was the reality that I was actually seeing formed stools and decreased bleeding within just a few days for the first time in a long time. I’ve definitely done quite a few things that were much harder both physically and mentally compared to starting the diet. I had been tapering off prednisone for two months when I started the diet, and it wasn’t for another three months until I was off those little white steroid pills completely.

Best of luck to you and anybody else who decides to give the SCD eating a try.

I’m 24 years old and live with my lovely partner Morgan in Farnborough, Hampshire. UC Symptoms started January 2012. No periods of remission at all until October 2014.

3 thoughts on “My UC Journey…Part One!”