My Husband Was Diagnosed with Colitis in September, Big-Time Concerned Wife

My husband is 31 and diagnosed with ulcerative colitis Sept 2014. He has had 2 colonoscopies and one endoscopy . He is one of the healthiest people I know and never expected him to get such a terrible disease .

He enjoys working on cars, riding motorcycles & four-wheelers and worked out 5 times a week.  Now a days he is usually too tired to work out. He is one of the most health conscious people I’ve ever met. My husband takes pride in everything he does and I want to do anything I possibly can to help him.

Currently he is experiencing bloody, mucus diarrhea. Some days he says it feels like hot lava coming out.  He goes to the restroom 15+ times a day, although some times it just ends up being gas.

Being diagnosed 7 months ago it’s starting to take a toll.

My husband feels defeated. He was put on Apriso for 4 months , 4 pills a day, and remission was not achieved.

For inflammation he was given predisone, he started at 40mg and decreased by .5 a week. When he got down to 20mg his blood and pain came back so since has been on 40mg. He is now on humira and will take his 3rd shot Wednesday. When he started the Humira I stopped his Apriso, but after a week or so his pain and blood and mucus all came back. I have had horrible communication with his doctors office and when I called and left message for the lady that deals with the humira there, she never returned my call. I needed to know if he was suppose to still be taking the Apriso until his Humira kicks in.

I have since started giving him it again and he is slowly showing signs of relief. 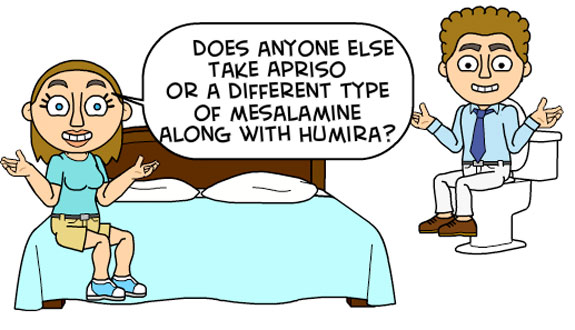 Does anyone else take Apriso or a different type of mesalamine along with Humira?

Does anyone take humira with any advice? I want to look into changing his doctor because I have had such difficulty with this doctors office i just don’t know how hard it is to switch.  I don’t want any of his prescriptions to be interfered with in the process.

Meals are still a trial and error game. So far red sauces, deep fried foods, high fiber and orange juice have not settled well.  It is just so frustrating because one day he can eat something and he will feel fine so the next day I’ll make the same meal and it tears him up.  Fish and rice have seemed to be the best for him, but you can only eat so much fish and rice . I also read that green tea is good for UC so I make him a hot cup of tea with honey in the mornings and before bed.

my husband was diagnosed with ulcerative colitis in September of 2014.

13 thoughts on “My Husband Was Diagnosed with Colitis in September, Big-Time Concerned Wife”