I was diagnosed with UC 10 months ago, after the birth of my second child. I’d dealt with digestive issues for a few years, but they became increasingly worse during each pregnancy. At the worst point, I was having up to 20 bloody and mucus filled bms per day. 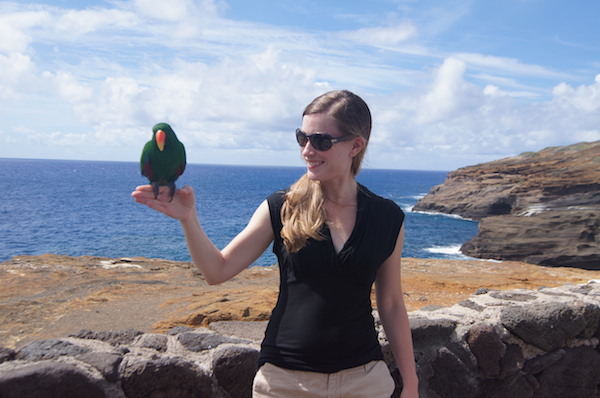 Catherine on the coast!

I love being outdoors, walking or just sitting on a park bench and reading. Food has always been a passion – While I was a student I taught myself to cook (broke and hungry will do it to you). Feeding family, neighbors and friends makes me very happy. I speak French and English, and am picking up Spanish now that my kids are learning it. I really enjoy traveling and learning about other cultures.

Since I’m following the GAPS diet, I’m fortunate that I enjoy being in the kitchen!

I’m currently in good shape, relative to where I was when diagnosed – Just not back to myself yet. I’m having 2-3 bm’s per day, but often the last one is very watery. I’m very bloated, feeling lots of nausea especially at the end of the day, constantly starving and very low energy.

I’ve been on the GAPS diet for six months. The diet and medication helped quite a lot for the first few months. However, I’ve had two bacterial infections over six months (both treated successfully with Flagyl) and haven’t felt like myself since taking the last round of antibiotics (eight weeks ago).

I am looking for anyone who has taken the Mediator Release Test (MTR), ideally while transitioning from the GAPS diet.

I’m seeing a new nutritionist in an effort to help combat my constant fatigue, gnawing hunger and perpetual nausea. Even though I’m following the GAPS diet religiously, I never feel full and am very skinny. And I eat a ton. Multiple friends and family members who haven’t seen me in a while ask me what is wrong, based solely on how I look. So… something has to give.

The nutritionist has suggested that I try the Mediator Release Test (MTR). It sounds fantastic – A test that will tell me what causes my body to produce inflammatory responses, from a panel of 150 whole foods?!? Wow!
Having stuck to GAPS for six months, I haven’t eaten 30 of the foods listed. Here’s the catch – In order for the test to be successful, the foods must have been eaten with some regularity in recent weeks.

This is an expensive blood test, even with insurance. I don’t want to take it in vain.

Ergo, what should I do – Try reintroducing non-GAPS foods, hoping that I don’t have some massive and awful flare up? Take the test and just resign myself to taking it again once I’ve reintroduced the foods very slowly and gradually? Don’t take the test at all?

My nutritionist feels that GAPS isn’t working well for me, and that there is a food which I’m eating (despite it’s being GAPS legal) which is still causing an inflammatory response. Therefore, she wants to come up with a more personalized diet plan in order to keep me sated and still rework my gut bacteria.

I must be honest… the idea of having potatoes, oatmeal, or rice sounds amazing. Like, really and totally amazing. But what will be the impact on my gut? I realize that you other UCers don’t have a crystal ball.

I would love to hear from anyone who has been in a similar situation. GAPS + MTR = Confusion (at least for me)

I was diagnosed with ulcerative colitis, after the birth of my second child. I’d dealt with digestive issues for a few years, but they became increasingly worse during each pregnancy.