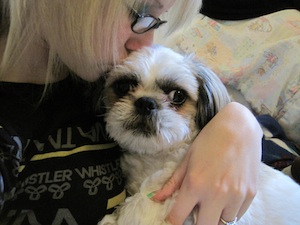 My name is Kristen, I have had Ulcerative Colitis for 21 years and have never really got it under control. Ive tried everything from ASA to prednisone (ew) to Remicade.

Im from Toronto, Ontario Canada. I am a psychology major in university and am working on completing my doctorate. The best thing in my life is my dog!

I have had UC for 21 years, being diagnosed at the rare age of 2. My struggle since then has been full of ups and downs, mostly downs. I am currently on Remicade and hyrdo-cortisone infusions every 6 weeks and was taking Imuran until 4 weeks ago. I was noticing horrible debilitating migraines, keeping me from school and other responsibilities. I tried everything, I went to a neurologist and got a whole bunch of tests done which all came back negative. I argued and argued with my doctors, telling them I was sure it was the imuran causing this as the migraines started shortly after I began this medication. Finally they agreed to take me off of it for a couple weeks to see what happened. ITS A MIRACLE! My headaches were gone, however my colitis was starting to get angry again. So we moved on to the next problem, now what do I take? My doctor suggested I try methotrexate and see if it helps. I was fearful to start such a damaging and scary medication that is commonly used for chemotherapy, however I agreed to try anything.

And so the next battle began.

I take 10.5 MG of methotrexate once a week and OMG does it make you feel crappy for a couple days. I took it Saturday night and the side effects began only a few hours after i took it. The worst being severe nausea, sometimes to the point of gagging and dry heaving, once in a while vomiting if it got intense. I also experienced a hangover type of headache on Sunday morning, and extreme fatigue for a couple of days. Just a general feeling of crap (however still an improvement to feel like crap 2 days out of the week instead of the 7 days i was dealing with before). A couple weeks into the methotrexate journey I bit my cheek and the next day i looked in my mouth, wondering why it was so painful. To my surprise the wound was covered in kankers and ulcerations…YAY (not). I turned to the internet for answers and found this was a rather common side effect, to the drug store i went a purchased a product by Colgate called Peroxyl which is a mouth wash specifically for mouth sores. Worked wonders, for anyone with this problem i suggest keeping a bottle handy. I have been taking methotrexate for about 6 weeks now and I am noticing the nausea is creeping further and further into the week. Lasting up to 4 days. It is really unpleasent to gag and dry heave all day, and I am unable to take gravol most of the time as it puts me right to sleep. I have tried ginger root pills which calm the nausea but don’t work for very long. I am wondering if there is anyone else out there with this problem, or even if any of you lovely UC’ers have any suggestions for medications or remedies for SEVERE nausea.
Thanks guys!

All of that being said, it should be noted the methotrexate and remicade are working very well on improving my Colitis, less symptoms than ever.

I have had Ulcerative Colitis for 21 years and have never really got it under control. Ive tried everything from ASA to prednisone (ew) to Remicade.