I am currently in remission. 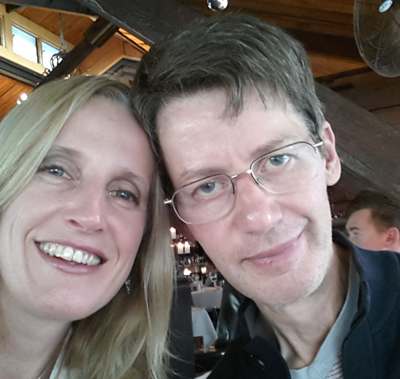 My name is Steven, I’m 56, happily married (no children sadly) and live in Australia. I had my first attack of UC in 2010. It is one thing knowing about it, I am medically trained (a GP), and another thing experiencing it. I also have Parkinson’s disease, but that’s a whole other story. Let’s just say the two conditions make life pretty interesting during a UC flare.

Some more about Steven:

Between the onset of UC (a pancolitis version) in 2010 and April 2012 I had 4 serious flare ups with 4 hospital admissions. On average I lost 4kg per admission and was dangerously low in weight (40kg or 88lbs). Prednisolone helped me recover but in my case its side effects were awful (suicidal depression, anxiety, panic, agitation and aggression).

I wasn’t keen on taking the immunosuppressants if I didn’t have to. So I searched for another way. Eventually this led to the SCD and a supplement called mastic gum. One pilot research study had found mastic gum effective for managing 10 people with active Crohn’s disease.
https://www.ncbi.nlm.nih.gov/pubmed/17278198

I figured if it worked for Crohn’s it would probably work for UC. So I purchased a bottle and when my next flare up came along I took 2x 500mg capsules twice a day. Within 24 hours I was feeling better and 4 days later I was significantly better. My CRP, a blood test measure of inflammation, dropped from around 115 to 15 in a week and was normal (< 3.0) another week later.

A warning here, it caused me significant constipation. When I halved the dose for this reason the flare resurfaced. So my Gastro suggested I keep taking mastic gum at the original dose (2 caps twice a day) and treat the constipation. This worked and within 2 weeks I no longer needed the anti-constipation treatment. I then weaned off the mastic gum over a 6 week period.

Over the next 3 years any time a flare (I had 4 episodes) arose the mastic capsules quickly (within days) did the job. I could then wean down the dose over just a couple of weeks. I thought I had the alternative to prednisolone.

However, three months ago I had a rapid onset flare, my worst acute episode since 2012. The mastic gum kept it down to just 3 BMs a day, but the pain and fever persisted and I also developed scleritis (an inflammation of the sclera of the eyes). So I had to turn to prednisolone again.

Nonetheless, mastic gum is a promising substitute for acute flare up management, as long as this is done, as I did, in conjunction with my Gastro and GP.

I’ll be sticking more closely to the SCD from here on. Prevention is best.

)
Fish oil +
L Glutamine ?
Aloe vera caused diarrhoea
Soft food diet and protein smoothies in acute flares +++ as per What to Eat with IBD by Tracie Dalessandro and Listen to Your Gut by JIni Patel-Thompson
Macrobiotic diet with Japanese twist +++ as per Controlling Crohn’s Disease by Valerie Harper
SCD ++++
Prednisolone ++++ but shocking side effects
Probiotics (VSL#3) +++(VSL 3 on Amazon.com)

My name is Steven, I’m 56, happily married (no children sadly) and live in Australia. I had my first attack of UC in 2010. It is one thing knowing about it, I am medically trained (a GP), and another thing experiencing it.

previousBeat Your Disease Interview About Ulcerative Colitis
nextFecal Transplant Interview with Dr. Davis – An Expert on FMT (With Instructions)