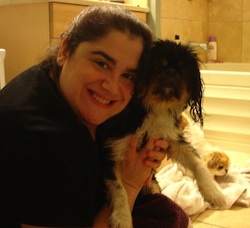 Hi! I am a 34-year-old wife and mother of a 3 1/2 year old. I suffer from Ulcerative Proctitis – one of my 4 current diseases. I also have a love of dogs, including my 2 small pups. Originally from Chicago, I’ve lived in the tri-state NYC area for 8 years now (just moved to Wayne, NJ). I am generally an upbeat, happy person, but this colitis just pulls me down. I also suffer from Multiple Sclerosis (MS), Common Variable Immunodeficiency (CVID), Diabetes and have a brain aneurysm.

Hobbies: Dogs! Sleep! Chicago White Sox baseball and Chicago Bears Football! Watching TV! Reading! Oh, did I mention sleep? I don’t get much sleep thanks to my son, but he is the best thing ever. Except when potty training. Not so much fun!!! lol

Although I’m not working right now, I worked in radio for 12 years and fell into PR. I was living my dream job – working in an animal shelter – for a month until a HORRIBLE flare made me quit the job. Ugh….And I haven’t worked since.

I am currently in the end of a relapse. Although it’s proctitis, I think it’s the same symptoms. Cramps, living on the toilet, blood, etc. The blood, thankfully, stopped after a week on Prednisone. However, I was having fevers of 102 degrees for about 30 hours. Went to the ER and found out that I had a Urinary Tract Infection (UTI). Went on Cipro and the fevers stopped. However, when I was in the ER, the doctors did that barium scan where you drink a gross, think drink and wait 2 hours for a CT-Scan. The drink set my bowels off worse than before the drink!!! Ugh. Now, due to the antibiotics and prednisone, I have a yeast infection. TMI, I know, but how can we really gross each other out at this point? :)

Well, I was diagnosed with Ulcerative Proctitis probably around 6 years ago. I didn’t think much of it. Just had blood in the stool, went to the doctor and got a colonoscopy. Sure enough, I had UP. I was put on pills and have been taking them ever since. I had previously been diagnosed with Multiple Sclerosis a few years before, so I just chalked it up to having something else! I went into an extreme flair in the spring, after having hemorrhoids surgically removed. I was in the hospital for 8 days. It took about 4 months for me to fully recover.

Now, after a big move, I went into another flare, although not as bad as in the spring. Both times, I had IVIG (Intravenous immunoglobulin) before the flare. (I get IVIG every 3 weeks due to a low immune system..Common Variable Immunodeficiency, or CVID). I am wondering if there is a link between to the two or if it’s coincidental. My GI says IVIG helps the colitis, but sometimes I wonder! Does anyone else here have immune issues? Or does anyone else have MS or even diabetes, too? My sugars are super high due to the prednisone, which is a common side effect.

Also – what are your thoughts about probiotics?

My GI just told me about getting on Align

so I can stop having what I call “rabbit turds!”

Last question – do you ever feel alone? I feel very alone with this disease. My husband is amazing, but it’s so hard without any family around. (They’re all in Chicago.) He doesn’t quite get it, as I feel like no one quite does!

I wish I was working again, but it’s hard to commit while being so tired and fighting my various diseases. I am not in a wheelchair or anything like that. Just a lot of invisible symptoms!