Link Between Thyroid Cancer and UC?

I am 32 years old. I have had Ulcerative Colitis for almost seven years now. I am married and have the most amazing husband. I truly adore him. :)

I like to go to the gym and do a lot of cardio exercises. I enjoy swimming and trying all sorts of new restaurants.

I went to see my primary care doctor a few weeks ago because I had a bladder infection. She noticed that my thyroid appeared big and said that I needed an ultrasound and bloodwork. I got both scheduled. The ultrasound lasted 30 minutes and was completely painless. My doctor called me a few days later (the night of my birthday) to give me the results. She said that my “bloodwork came back perfect.” Even my thyroid levels! Next she said that the ultrasound had revealed several nodules, some of which were quite large. She recommended that I go see my ENT for a biopsy. The ultrasound report had 8 nodules that I counted. 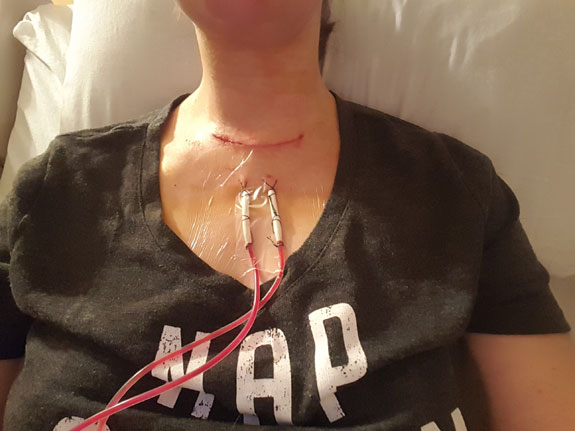 one day after surgery with the drains 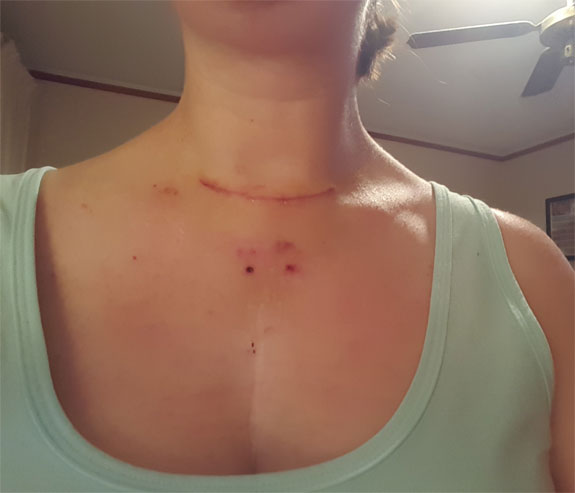 Photo after the drains were removed

My ENT recommended a fine needle aspiration biopsy. I was soooooo scared. Basically I had to go to same day surgery and have a radiologist stick a needle directly into my thyroid to extract some cells for testing. I got some IV anesthesia, but was awake for the entire thing. Whatever they gave me made it seem like the ceiling was spinning and I saw what looked like an owl and a bunny. I was so focused on that that I really didn’t pay too much attention to the needle going into my neck. I did feel the numbing medicine burn. It was over in about 5 minutes, and I feel asleep afterwards, because that’s the kind of luck I have. I was on bed rest for a little while to follow it and got to go home. My husband took me to IHOP, where I barely stayed awake in the restaurant. After I had my waffle I went home and slept for the entire day.

We went a few days later to meet with my ENT to get the results. He told me that it came back as suspicious for papillary thyroid cancer and he recommended surgery. We talked for a bit and he answered all our questions. What I understand is that that type of cancer is very slow moving and not aggressive. He then told me to go home, have a cry, and a drink. We ended up meeting my Dad and brother for 2 for 1 margarita night and got some Mexican food.

I had surgery on August 25, 2017. I was, of course, a little nervous that morning. I was most scared about being intubated, but my doctor assured me that I wouldn’t be aware of that happening. The plan was that I would definitely have the right side of my thyroid removed. The pathologist would test it in the operating room and let my ENT know the results. If it came back positive, the entire organ plus several lymph nodes would be removed. And the test came back positive for papillary thyroid cancer, so I had it removed. The surgery itself lasted about 4 hours. This type of cancer seems to run in families, which is odd because no one in my family has thyroid issues.

I remember waking up and felt EXTREMELY nauseated. I had a sore throat, from the breathing tube. Not much pain at that moment. The nurse gave me some IV Zofran and that seemed to help. I made it to my room where I was put on a liquid diet that first day. I think everyone was really concerned about swallowing issues, but I did fine. I did discover that I will throw up if I take Percocet on an empty stomach. I also had 2 drains coming out of my neck. They were heavy and very awkward. Fortunately I was still pretty numb from the anesthesia so they didn’t bother me so much that first day. My calcium levels dropped, which was kind of expected since the parathyroid was involved. I took a couple calcium pills and they came back to normal. You can tell that it’s dropped because you feel a numbness and tingling in your hands and feet.

But, oh the next day….. those drains hurt!! I didn’t have a safety pin to pin it to my clothes so they would just flop all over. Oh my — not the best experience of my life. My ENT felt like I was stable enough to discharge home….. with the drains. They came out 2 days later and it was probably one of the best feelings I’ve ever had in my entire life. They were removed in the office and it was not painful at all when the doctor pulled them out.

So, I’ve always known not to take certain medications because of my UC. I didn’t really know what effect that would have on me if I did. I was SOOOOOO constipated while taking the Percocet. I took stool softeners 3 times per day and didn’t have a BM for 5 days. Finally, I just decided it was better to deal with the discomfort in my throat for a little bit and be able to use the restroom, rather than take the Percocet and be totally stopped up.

I have started taking Synthroid, which is a thyroid hormone replacement. I’ll need that for the rest of my life. The next step in eliminating the cancer is to get scheduled for radioactive iodine. My new endocrinologist explained that I go in for a series of shots on a Monday and Tuesday, and then get admitted to the hospital on a Wednesday. I’ll be put in a lead room, and can have no visitors. I’m supposed to take a pill that will make me radioactive for a bit, and will stay in the hospital until my levels come down. It sounds like it’s a 1 treatment dose, which is good news. I don’t fully understand it, but I think the thyroid is supposed to like iodine in your body and so it “gets excited” and wants to absorb it. Since this type of iodine is radioactive, it will kill any remaining thyroid cancer cells. This treatment will also mean that my husband and I must wait a year before trying to start a family. There is some concern about fetal cells muta ting badly.

Prior to surgery I was completely in remission, with no symptoms. My GI doctor requested that I make an appointment with him after the surgery, because everyone had a genuine concern of what the stress would do to my body. Right now I am having some discomfort in my abdomen and my BM’s aren’t as solid as they once were. I will go see him this afternoon. Hopefully this is something minor that can be treated. I will let you all know what he says after today’s appointment.

Here are some questions:

1. Has anyone with UC ever had thyroid issues? I always assumed that my fatigue was UC related. Now I’m not so sure.

2. Has anyone ever gotten papillary thyroid cancer while also having UC?

3. Does anyone know if any UC meds can cause this specific type of cancer?

Current and Past Medications:

I’m 31 years old and have had UC for five years now. I have come a long way since my initial flare and am doing much better now.

1 thought on “Link Between Thyroid Cancer and UC?”