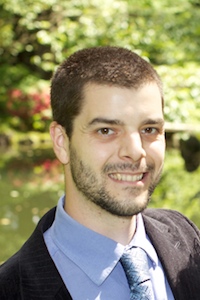 Greetings, My name is Andy. I’m from a small town in Southern Ontario, Canada. Currently residing in Vancouver, British Columbia, Canada. This should give you some indication I’ve had pretty decent accessible health care. I’m a fairly active guy, prior to my first flare up commuting to work by bike, taking solo bike trips to the Gulf Islands off BC to camp for several days, trying to put on 60 km/day on average. That’s not a super commitment to cycling but you get the idea – I’m all for staying active and I’ve been in decent shape. My wife and I have lived in Vancouver for the past 3 years with our furry little son, Chase, a Jack Russel Terrier. My family is in Ontario. My father was diagnosed with Ulcerative Colitis when he was about 5 years older than I am now. I am 27 years old, and was diagnosed with Ulcerative Colitis on the 21st of November 2012. I really appreciate feedback, comments, advice, and am also hoping any experiences I have to share may help others. Feel free to inquire. ~ cheers

My passion is photography. I can barely sit still for an hour. I have very little tolerance for endeavors without any intrinsic value. But I pay the bills. Put my wife through university at UBC and am ready to take steps to move into a professional photography career, now that she’s working. I’ve burned a few years in Customer Service but can honestly say that the saving grace of any job can be, and should be, awesome colleagues. My faith is in people; on the ground, living and working people that make up your life. These people are awesome and make everything go. I’m a dog person too. My wife and I share our main hobby of raising our Jack Russel Terrier, Chase. JRT may be the future’s energy source.

Currently I’m golden. Apart from the fact I can’t sleep as much as I want to. I would like to sleep 6-7 hours a night but I can barely get 4 hours in. Not for nocturnal bowel movements, but this Predinisone, as awesome as it is for my UC symptoms, is making me pretty strung out. I think its bugging my joints a bit and I’ve got a little moon face and back acne. I can’t complain much now.

I had just finished a one day bike trip that would have just pushed 100 km, round trip from the Swartz Bay Ferry Terminal to Victoria, BC and back. Plus some riding out to the Tsawwassen ferry terminal from Vancouver assisted with public transit to get out of the boring part of town. The following day I was down for the count having been reduced to a brown fire hose.

Previously I had been someone who might have thought they had IBS, not IBD. from the time I was about 16 until the end of this summer (damn you 2012!) I had maybe 3-5 weeks, 1 week or so at a time throughout the year, of loose stool/mild diarrhea. Never any blood with occasional constipation. I knew my gut had some problems with certain foods too, but omission of certain foods was an easy solution up until this fall.

My father was diagnosed at 36 or 37 years old. I knew I was a candidate for Ulcerative Colitis. When my symptoms presented an order of magnitude more severe than my prior bouts I went to the walk in clinic and saw a GP with that specific concern. Given my history and the persistence of my symptoms, and the new presence of blood in the stool (not a tone of blood though, poor an ounce of chocolate milk in the can and pretend its red) which would be my morning or nocturnal movement, I was referred to a specialist and had an appointment within about a month. I stayed hydrated and persevered in the mean time. I’ve been through two failed drug therapies since that have been the climax of my discomfort. Those drugs made my symptoms go to 11 and stay there for about 6 weeks.

Please check out the Medications section for a more complete history and let me know what you think. I’m currently feeling awesome and am in the middle of big choice. My Dr. wants me to try Remicade next. Popular drug it seems these days. I’m on Prednisone now and I know it’s like coke for your bowels, bad long term, awesome short term. But I’m at 2 strikes with him now, well, not him per say just these hard meds, I’m not into meds! and geeze, knock on wood, just about feeling perfect aside from the weirdo steroid side effects. I really want to go holistic at this point. But I need to meet with my specialist and work this out. He’s supportive of diet and all that, he just said something to the affect of “don’t bother now as these drugs do some drastic shit one way or another and you won’t know what’s being affective or not” seems reasonable to me, … he’s Scottish and swears a lot. Casual guy, very personable, and highly accessible as a specialist; I can pretty much just drop in and see him if I’m in a bad way with no appointment or notice and he’ll see me in the wait between the current patient and the next. He’s used to that with UC patients. This is just public health care in Canada. Mind you it’s Vancouver and things here are top-shelf; it isn’t quite equal across the nation unfortunately… no point in getting into that now. I’m fortunate and grateful for it! Healthcare is a Provincial thing in .ca

For the sake of context I’m a 27 year old male weighing about 165 pounds to begin this journey and now at about 155 pounds probably having gained back some weight. Jack rabbit metabolism and my legs basically never stop moving. Both now and prior to meds, my whole life.

My father and I have both turned out to respond terribly to the 5 amino ASA’s. I was given a dose of Mesalamine, aka Mezavant 2.4g/day. that’s right grams/day not miligrams… that seems really high to me.

Never have I had such terrible diarrhea in my life – before or since. Although the bleeding just about stopped. Or I wasn’t bleeding that much anyway and having such frequent bowel movements it was barely visible. Although I couldn’t keep up with it; I was fearing severe dehydration and drinking tons and tons of water and pedialite and coconut water and just simply making my own sport drink mixes, avoiding caffeine and alcohol. Two weeks in I ended up on the throne about 15+ times a day for about a week before I called my specialist and was given a 40mg/day dose of Prednisone tapering off a week at a time by 5mg. Two weeks later with the problems persisting I just quit and called my specialist to tell him I stopped taking the Mesalamine because it seemed to be killing me. He agreed but said the Prednisone was likely keeping the bleeding down and to stay on it.

I was prescribed a longer term of Prednisone, at 30mg/day at that point, the taper was extended to two weeks per dose, so 2 weeks at 30mg/day, then 2 at 25mg/day, to terminate after 12 weeks. Concurrently I was prescribed Azathioprine 150mg/day. This did nothing for about 2 weeks then it seemed to kick in or something as by 3pm, consistently for about a week I was feeling like I had been hit by a bus, and in the final three days began to feel nauseous. I walked into my specialist’s office and told him what was up so he recommended the following day I cut the dose down to 100 mg/day. I was going to do that but had then spent from 3pm to about 5pm vomiting that day with a fever of 102.9 F. I called him and left a voice mail, he called me back the next day and told me to quit the Azathioprine and keep up with the Prednisone. 3 days later, I’m golden.

The weird thing is that while on the Azathioprine, pretty much a week after I stopped the Mesalamine, my gut was made of like kryptonite or something. I could have probably digested iron piles at that point.

Since then life has been good. Apart from all the weird side affects of Prednisone, irritability, 4hrs of sleep per night on average, back acne, increased appetite, and my joints are kinda bugging me, life is great. My stool is like Play Dough. I have a bit of gas but otherwise I’m pretty much back to feeling as awesome as I was in July.

I’m from a small town in Southern Ontario, Canada. Currently residing in Vancouver, British Columbia, Canada. This should give you some indication I’ve had pretty decent accessible health care. I’m a fairly active guy, prior to my first flare up commuting to work by bike, taking solo bike trips to the Gulf Islands off BC to camp for several days, trying to put on 60 km/day on average. That’s not a super commitment to cycling but you get the idea – I’m all for staying active and I’ve been in decent shape.